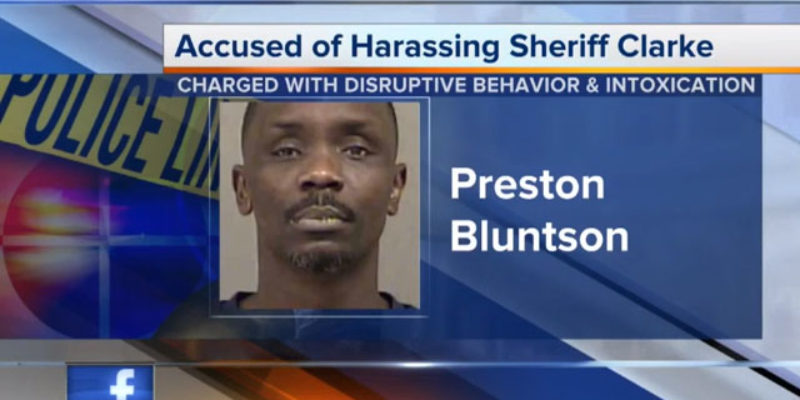 Clarke is, as our readers know, the sheriff of Milwaukee County and a speaker for conservative causes as well as a Trump supporter. But like the Trumpster from Portland, Oregon (?) we discussed yesterday, he’s also the victim of a crazed Clinton supporter who thought his political differences with Clarke were license for some extremely uncivil behavior.

From WTMJ-TV in Milwaukee…

The Charlotte Observer has the whole story…

Flight passenger Preston Bluntson, 36, was arrested by police at around 7:10 p.m. Saturday. Both Bluntson and Clarke are African American, and Bluntson appeared to be familiar with Clarke’s political affiliations and said the sheriff was “not one of us.”

A passenger on the American Airlines flight, who asked not to be named, told the Journal Sentinel that Bluntson became increasingly loud and disruptive, directing many comments at Clarke, who was at the back of the small plane.

“The guy was very abusive,” the passenger said.

When the plane landed, Clarke held Bluntson down, and a Charlotte officer boarded the plane and handcuffed him, according to the passenger. Three or four other officers then met Bluntson when he left the plane, and Clarke filled out paperwork on the incident, the newspaper reported. Bluntson was released on bond from the Mecklenburg County jail on Sept. 25.

The Milwaukee County Sheriff’s Office issued a press release on the incident, saying that Clarke intervened midway through the flight when a man became profane and began harassing flight crew and passengers.

“The sheriff left his seat…and told the man to ‘chill out.’…The man continued his obnoxious behavior and on approach to landing he got out of his seat…While the plane taxied to the gate he began taunting the sheriff, asking him what he was going to do about it,” said the statement from the Sheriff’s Office.

“Clarke ordered him to sit down and when he refused, Clarke shoved the unruly passenger face down and pinned him against the seat and held him there until the flight arrived at the gate.”

We really can’t have these kinds of episodes popping up all over the country. You have a responsibility as an American citizen not to act like a barbarian or a boor to total strangers just because their politics might differ from yours. That’s one of the best ways to crush free speech and destroy civil discourse, and it’s a shortcut to a civil war that the unhinged lefties – who don’t own guns and hate people who do – are sure to lose.

But we’ve allowed the culture to be so degraded that we’re actually teaching this kind of behavior on college campuses – this is what the whole “triggering” and “safe spaces” idiocy is all about. We’re no longer enforcing the principle that people have the right to disagree with you and you have a duty to respect their opinions in the same way you would have them respect yours; instead, we’re coddling morons and encouraging their emotional outbursts.

The product being that insane harpy we brought you yesterday, and today’s drunken idiot who Clarke had to straighten out.

This will only get worse, not simply as this election cycle goes on but as the culture gets worse. It’s mostly Trump supporters on the receiving end now, because the Left has pioneered the acceptability of this kind of behavior and they believe Trump’s “racism” justifies the abuse of those who back him, but as it gets worse it will be everyone. Trump’s supporters, after all, are hardly immune from bad behavior of their own – and if they’re going to be berated by leftist loons for the sin of choosing a candidate it’s inevitable that they’ll act out in similar fashion.

Or at least many of them will.

It’s time for Hillary Clinton to step up and police her people.

Interested in more national news? We've got you covered! See More National News
Previous Article If You Want Proof Of How Awful This Election Is, See The Alicia Machado Thing
Next Article Senate Overrides Obama Veto On 9/11 Lawsuits Bill