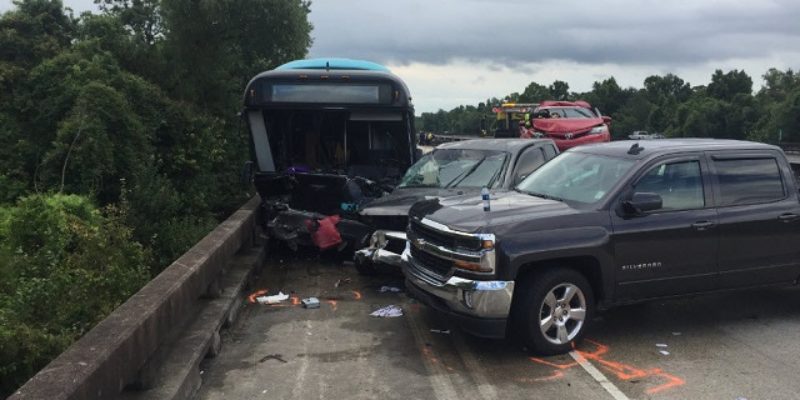 Thanks to reporting by David Hammer at WWL-TV, we now have a new name to chew on in the story of last month’s I-10 bus crash involving a criminal illegal alien driver who killed two people: Edgar Emilio Rueda Betancourth.

Who is Edgar Emilio Rueda Betancourth? According to Hammer, he’s the go-between used by the politically-connected WRS, Inc. (that’s the labor contractor responsible for filling buses in New Orleans full of illegal aliens heading for Baton Rouge to do flood repair work at the center of the bux crash controversy) to procure illegals.

And Rueda is himself illegal. As you would have likely guessed.

Edgar Emilio Rueda Betancourth used falsified documents in 2011 to try to get a Louisiana driver’s license, according to a state police report. Rueda managed to set up businesses and register them with the Secretary of State, which allowed him to set up a long-term relationship as a labor recruiter for WRS Inc., a staffing firm owned by two Republican elected officials.

The revelations raise new questions about just how interested contractors and other employers are in weeding out illegal immigrants before hiring workers, and just how intent the federal government is in catching them.

“Did they know he was here illegally? Or was it just a wink and a nod and, ‘Oh, OK, you have this paperwork. That’s good so we’ll just move with that’?” asked WWL-TV legal analyst and former federal prosecutor Chick Foret.

Rueda has been operating a business under the name North American Cleaning Crew LLC. He applied for residential and commercial contractor’s licenses in 2014, but never completed the process with the Louisiana State Licensing Board for Contractors.

But that didn’t stop him from pulling permits under North American Cleaning Crew in New Orleans, including for a large interior demolition project on Camp Street downtown in 2013.

WRS called on Rueda on Aug. 28 to bring them a crew of potential workers to gut flood-damaged commercial properties. Rueda then arranged for a bus from Kristina’s Transportation to pick up workers at the Clearview shopping center.

What we don’t know is whose idea it was – Rueda’s or WRS’s – to have Denis Yasmin Amaya Rodriguez, the illegal alien without a driver’s license who ultimately crashed the bus, sitting behind the wheel. One imagines it was probably Rueda’s; not to let WRS off the hook, but you probably wouldn’t expect this guy, whose own conduct with respect to licenses and permits isn’t the greatest, to care all that much whether the driver of the bus with his people in it has a driver’s license.

This also from Hammer…

Conservative politicians, including both of Louisiana’s U.S. senators and Attorney General Jeff Landry, questioned how Amaya had managed to stay in the country illegally after five violations for driving without a license and an arrest for domestic abuse battery in 2011, criminal charges that were later dropped.

The same questions could be raised about Rueda, who has been caught without a valid driver’s license multiple times and once was arrested for allegedly trying to trick the state into giving him one.

He got in a car accident in Jefferson Parish in 2009 and was cited for driving on a New Mexico license more than six months after moving to Louisiana.

It appears that license was bogus, however, because two years later he showed up at the Office of Motor Vehicles in Westwego with a Puerto Rican birth certificate and Social Security card with someone else’s name on them, according to a case report by State Police Sgt. Pat Bradley.

In that same report, Bradley said Rueda admitted under questioning that he was not the person listed on the documents and that he had purchased them in an effort to get a Louisiana driver’s license.

Puerto Rico is a U.S. commonwealth and people born there are automatically U.S. citizens, which is why Rueda would have used a Puerto Rican birth certificate to try to establish himself as a citizen.

A year later, Rueda was pulled over and charged with driving without any license.

If you’ve got this image in your head, you’re not alone…

We think we know what’s going on here. Let’s paint a picture and, when all the facts of this case finally do come out, we’ll see just how accurate it is.

First, we have a sheriff in Jefferson Parish who won’t shut up about how tough he is on illegal aliens and getting them deported – and yet he’s got a sizable number of illegals living in Jefferson who don’t get deported even when they drive around without driver’s licenses and get in car wrecks. That’s true of both Amaya and Rueda. We also have the Louisiana State Police who catch these illegals breaking the law – in Amaya’s case, twice for driving without a license and in Rueda’s case for fraudulently attempting to obtain one – and our sources tell us it’s been several years since the LSP has referred any of them to ICE for deportation because they’ve essentially given up trying to get ICE to take them.

And that means, essentially, that the illegals are more or less above the law.

Then we have a politically connected company which uses an illegal, Rueda, to procure the labor of other illegals like Amaya to do construction and other work, and one would imagine profiting greatly off the transactions. In the instant case that company, one of the owners of which is an elected St. Tammany parish constable named Eddie Schmidt who we’re told is on friendly terms with the Jefferson Parish courthouse gang, is using the highly visible parking lot of Clearview Shopping Center as a staging area to load multiple buses full of illegals to get to Baton Rouge and gut houses flooded in last month’s deluge. And it turns out those buses are being driven by illegals – we only know about Amaya for certain, and WWL’s previous reporting indicates he’d driven one of those buses at least five times before the crash, but is there any doubt the other drivers were also illegals?

This had been going on every day for a week or so before Amaya plowed that bus into a traffic pileup on I-10 west of LaPlace in St. John Parish, injuring some 40 people and killing two, including a St. John fire chief. For all we know it might still be going on. And yet no Jefferson Parish sheriff deputy or state police trooper bothered to pull up and see if the bus drivers had licenses or if the workers were legal or any of the other violations of state or federal law you can imagine might have been happening. When WRS’ local owner is reportedly pals with the politicians in Jefferson, including the sheriff.

It’s one thing that illegals are being trucked up to Baton Rouge to gut houses and now to hang drywall or lay down flooring. We all accept that much of that needed work probably wouldn’t get done without them. It’s something else when there isn’t even a pretense that those illegals be required to follow the law – as in, the guy driving the bus doesn’t have a diver’s license at all, much less a commercial driver’s license. And it’s even something beyond that when it’s elected politicians who own the companies shopping illegal labor. Something tells us that if it was Joe Six-Pack, Incorporated trying to load buses full of illegals to gut houses in Baton Rouge at the Clearview Shopping Center parking lot you’d have law enforcement jumping down their throats.

It’s good to be connected, is the thing.

This mess isn’t over. That bus crash kicked over an anthill of corruption and lies.