You sure don’t have to look very hard to find evidence of what a leftist rag Baton Rouge’s newspaper of record is.

Today, for example, there’s an article in the Advocate, written by Mark Ballard, which talks about a relevant subject in next month’s Senate primary – namely, the battle between Rep. John Fleming and Col. Rob Maness for the conservative vote – and takes what seems like the most pejorative attitude possible toward the segment of the electorate the two are chiefly competing for.

And then dismisses them…

The brotherhood between conservative Christians and tea partiers that had been such a force in recent Louisiana elections is cracking under the pressures of the race for the U.S. Senate.

That means the far right wing – predominantly white voters who hold traditional Judeo-Christian values and believe in American exceptionalism – could play a negligible role in determining which Republican candidate makes the runoff.

The basic conclusion Ballard comes to was the conventional wisdom in the race prior to the release of the most recent JMC Analytics poll a week ago – namely, that for Fleming to have a real shot at wedging his way into the runoff he’d need to find a way to get Maness out of the race because the majority of Maness’ voters would swing to Fleming.

We’ll need to see an independent poll that confirms JMC’s findings to know whether Fleming’s view of the race, namely that he’s beginning to appeal to more moderate voters who were backing John Kennedy or Charles Boustany, holds up – but there is some reason to believe his camp might be telling the truth.

What’s objectionable here is that somehow if you’re white and you’re religious and you’re a patriot that somehow makes you a far-right voter. Nobody other than a leftist would think to describe the “far right” in such a way. The more descriptive term is “ideological conservative,” as voters fitting that label will tend to support a candidate who most believably runs on the old Reaganite three-legged stool of strong national defense, free market economics/limited size and scope of government and a traditional view of social issues.

Somehow you’re a “far right” voter if you believe in those things? If that’s the case then Kennedy and Boustany are pretty seriously trying to appeal to that “negligible” segment of the electorate as well.

The fact is that none of the candidates has consolidated the ideological conservative vote in the race, largely because Fleming and Maness each have some of it and so does Kennedy, and Boustany has some of it in his congressional district where he’s expended a lot of effort in order to build a stronghold.

But if ideological conservatives will play a “negligible” role in the race, what of ideological liberals? Ballard hasn’t written anything about them that we’ve seen, and they’re dealing with the same problem of having their vote split between Foster Campbell and Caroline Fayard. That’s driven Campbell’s campaign manager Eric Foglesong to profanity-laced distraction. And what about black voters, who likewise are split in this race largely along geographical lines? Where’s the Advocate story about how neither Campbell nor Fayard have managed to consolidate the black vote?

It’s one thing for the Advocate to continue its shameless promotion of John Bel Edwards, who is increasingly showing himself incapable of focusing on the immense task of flood recovery. It’s another for them to display an East Coast snobbery toward a large segment of their own readership. Of course, that segment is declining along with the Advocate’s circulation – because increasingly there is very little in that paper other than coverage of LSU sports anyone but a partisan Democrat would find worthwhile.

The first time Hebert went to court in an attempt to gin up attention for himself was when he sued pollster Bernie Pinsonat for misidentifying his party affiliation in a survey the latter did a couple back in February. Now he’s back, and he’s suing Louisiana Public Broadcasting for not including him in the Senate debate they’ve scheduled for Oct. 18 in Ruston.

LPB only invited five of the 24 candidates running for the Senate – John Kennedy, Charles Boustany, John Fleming, Foster Campbell and Caroline Fayard. At this point none of the others has a chance to win the race, so inviting any of them would likely result in wasting airtime of serious candidates.

And Hebert is most certainly not. He’s raised next to zero money, and made the usual excuse for not doing so – namely that he’s against the system that’s rigged in favor of the wealthy. As though that’s some sort of original take rather than a time-honored dodge of a fundamental responsibility of a candidate for political office. You either get on the phone and sell yourself and your ideas to the people you want to represent, and get some of them to agree you’re worthy of their financial support, or you don’t rate any consideration from the public.

What he’s essentially saying is this – LPB either allows him to show up and waste their airtime, or he’s going to make sure LPB wastes their money defending a frivolous lawsuit.

Either way, seems like Hebert is always wasting something. None of you are going to vote for that clown, right?

We found this quite invigorating…

This phenomenon of football players showing disrespect for the national anthem before games, which started with the useless Colin Kaepernick and has now filtered all the way to members of marching bands (if you haven’t seen the video of East Carolina University fans booing their own band at halftime after some of them kneeled for the national anthem they were playing before the game, you’ve missed out), is one of the more idiotic things to come out of the Obama years. One wonders exactly how the perpetrators of the attack on the anthem came to the conclusion they were going to persuade people to join them in fighting police racism based on such an in-your-face affront to American patriotism.

And one wonders how the clowns on Bonnabel’s football team got the idea that they should be embracing social activism.

One bit of education that came from their show of solidarity with Black Lives Matter was the 59-0 beatdown they took at the hands of Landry-Walker after they decided to kneel for the anthem. Nobody at Landry-Walker was wasting time trying to make a political statement; they were there to play football. And that focus on the business at hand worked pretty well for them.

At the end of the day, the idiots on Bonnabel’s football team provided a perfect metaphor for Black Lives Matter. They didn’t come prepared to tackle the problem in front of them – in Black Lives Matter’s case, the shocking level of violent crime in black communities which necessitates an aggressive police presence, and in Bonnabel’s case a quality opponent with the ability to move the ball in the air – and instead offered social activism. And the result was failure and humiliation, as it usually is.

They’re losers. Someone has taught them to be losers. The coach who didn’t put a stop to that disgraceful spectacle before it got started is a loser and he’s responsible.

Bonnabel’s alumni have noticed, and they’ve decided they don’t want to support a loser. Good for them. It’s about time we had some standards.

For Today’s Last Thing we will talk about the weather, and pose the question whether LSU’s game with Florida on Saturday might end up in Tiger Stadium rather than in Gainesville. The schools and the SEC will have to make that determination tomorrow. 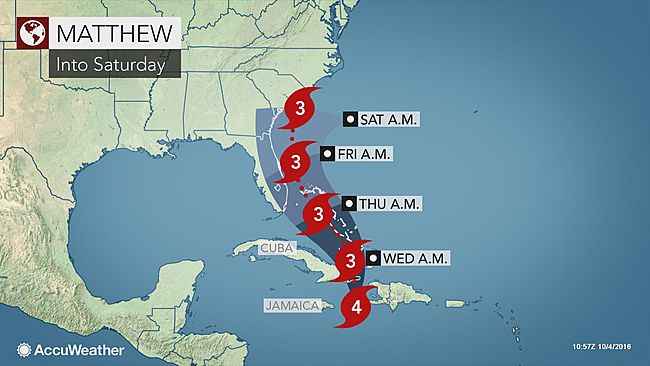 That’s Accuweather’s map. The Weather Channel has this forecast…

Gainesville is closer to the west coast of Florida than the east coast, so the guess is they’ll miss most of the impact of the storm and just suffer some pretty heavy rains.

But there’s a trough of low pressure over much of the eastern U.S. right now, and that’s expected to pull the hurricane westward toward the east coast. If that pull turns out to be a little stronger than expected, Matthew could end up a good bit closer to Gainesville and make a mess there.

We’ll just have to see what happens. Could get interesting over the next 24 hours.