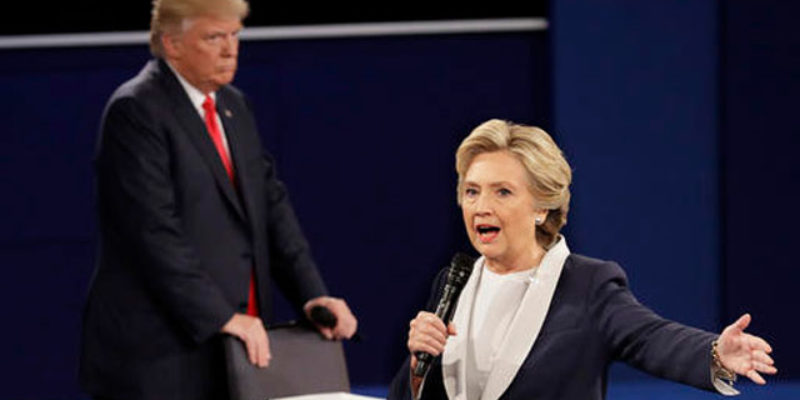 It was 90 minutes of essentially pouring acid in your eyes, particularly in the first third of it. It got better after Trump waded through the disaster of Friday’s leak of a bunch of “locker room talk” (his words) from a hot-mic feed of an Access Hollywood appearance he made in 2005 when he was talking about trying to sleep with married women and all of the sexually over-forward behavior he could get away with because he’s famous.

But like the first debate, Trump missed opportunity after opportunity to slaughter Hillary Clinton, who is unlikable, brazenly mendacious and stiff as a board.

Nevertheless, with his campaign collapsing and prominent Republicans dumping support for him, Trump held on and won the debate. And this was why…

This was THE QUOTE of the #debate and maybe the entire election. "Because you'd be in jail" – Trump pic.twitter.com/rZbp2GBiQh

The question of Hillary’s e-mails and the corruption of the Clinton Foundation is really Trump’s only winning narrative at this point. This election won’t be won on ideological grounds, because a presidential electorate can’t be relied upon to choose a conservative candidate over a leftist one. Trump can’t win a popularity contest over Hillary – or anyone else. He can’t win on policy knowledge and competence. He can’t even win on the utter depravity of the Clinton family’s atrocious personal conduct.

But what he might be able to win on the institutional corruption the Clintons have spread across the country. And he now has the line of attack, and the sound-bite hook, to press that forward to the American people.

Will it work? Can he win? As we said on Saturday it’s unlikely. But if nothing else that sound bite will damage Clinton and stamp her as a crook, and the hardening of that impression on her might well make it difficult for her to grow coattails or win re-election.

Interested in more national news? We've got you covered! See More National News
Previous Article UPDATED: It Sounds Like The LSU-Florida Make-Up Date Is Going To Happen…
Next Article CROUERE: For Trump, It’s The Economy, Stupid