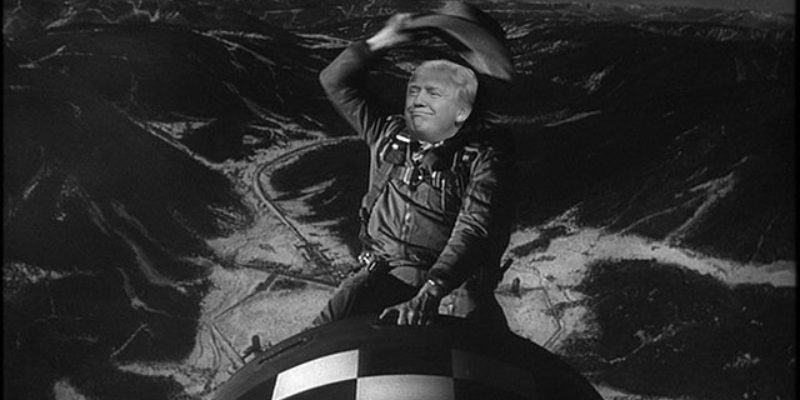 …I don’t need to link the video that surfaced on Friday afternoon in which The Donald, appearing on an “Access Hollywood” episode with host Billy Bush in 2005, made some hot-mic remarks worthy of a drunken college sophomore with overheated hormones. By now our readers already know about the controversy that has blown up as a result.

And you can stop with the “Hilary is worse” stuff. That is as brilliantly obvious as it is irrelevant. The media is playing up “Grab her by the p*ssy” precisely because it overshadows what Trump’s Russian intelligence pals released through Wikileaks today – which is an absolute treasure trove of damning and disqualifying information.

Including speeches Hillary Clinton gave at events sponsored by major banks, including one in Brazil where she called, essentially, for the elimination of borders within the Western Hemisphere and wide-open trade and immigration policies which even free-trade proponents would have to recognize as resulting in a reduction of the American standard of living to that closer to an Argentina or Panama and the permanent transformation of the American electorate to something removed from its current status.

And some 2,000 emails from Hillary’s server which contain an admission she is disconnected from the American middle class, among other juicy morsels.

And also the complete archive of Clinton campaign chairman and Democrat insider John Podesta, one of the worst people on earth.

This would have been the day that destroyed the Clinton campaign and possibly even the Clinton machine altogether, and changed the political game completely. But the Clintons were ready, and played the Access Hollywood card. In doing so they banished all of the disqualifying information on Hillary to the back pages and threw Trump’s campaign into crisis.

And the GOP has been sundered, irrevocably, as a result. One month from election day.

Party chairman Reince Priebus has condemned Trump for the remarks. Mitt Romney is gloating. Paul Ryan dumped plans to campaign with him. And that’s just the beginning.

Rep. Jason Chaffetz (R-Utah), the chairman of the House Oversight Committee, went on his local news channel to retract his endorsement of Trump.

Some of Trump’s Republican critics — including vulnerable GOP Sen. Mark Kirk (R-Ill.) — are even demanding that Trump drop out of the race.

At present, Trump has not been abandoned by party leaders, but his situation is precarious.

His early response, in which he called the remarks “locker room” talk and declined to offer a full apology, has only made the situation worse.

“I apologize if anyone was offended,” Trump said.

But a disaster at the top of the ticket might cost them those majorities, Republicans fear, particularly in the Senate.

“These comments are repugnant, and unacceptable in any circumstance,” McConnell said. “As the father of three daughters, I strongly believe that Trump needs to apologize directly to women and girls everywhere, and take full responsibility for the utter lack of respect for women shown in his comments on that tape.”

Here’s a taste of the next batch…

Harth and her longtime boyfriend were in meetings with Trump to forge a business partnership. “He was relentless,” Harth recalled in an interview, describing how on Dec. 12, 1992, he took the couple to dinner and a club — and then situated himself beside Harth and ran his hands up her skirt, to her crotch. “I didn’t know how to handle it. I would go away from him and say I have to go to the restroom. It was the escape route.”

We’ve all heard of Trump’s unethical or loutish behavior, most recently in a 2005 recording unearthed by The Washington Post on Friday in which he boasts of kissing and groping women. The story that Harth and the boyfriend, George Houraney, tell of their interactions with Trump over six years — including business cheating and attempted rape — shows how that predation worked in practice. “He name-dropped continuously,” Harth said under oath in a deposition in a subsequent lawsuit, “when he wasn’t groping me.”

Harth and Houraney were simply an ordinary Florida couple thrilled that Trump wanted to partner with them. And that’s when the nightmare began. (Trump strongly denies these improprieties.) Anyone thinking about voting for Trump would do well to listen to Houraney and Harth.

It isn’t getting better. It’ll get worse. Trump is supposed to debate on Sunday; the groping and bragging will be all that’s talked about.

Sources are telling me that there is a crisis level meeting happening right now at Trump Tower. Pressure is being brought to bear by RNC and GOP leadership sources against Trump and his team. I’m told to expect “major s**t to hit the fan.”

He says it’s too late to do anything about this disaster. I would disagree, but it would require the stones on the part of Priebus and the party’s insiders to get rid of Trump – and to persuade him his only choice is to get out.

And perhaps Pence, who after demolishing Tim Kaine in the vice-presidential debate on Tuesday, giving Trump an either-you-walk-or-I-do ultimatum. Pence would be the GOP’s only hope as the nominee, but were he to get the call there would be a reservoir of goodwill from having won the debate to marry to the public’s severe distrust of the Clintons that a victory might even be salvaged. Particularly if Pence were to be brought in to debate Clinton on Sunday and he was to do so successfully.

That, at this point, is little more than fantasy. There would be only one alpha male at Preibus’ crisis meeting, and it’s Trump. He isn’t going anywhere and his defeat is more or less assured now.

None of this had to happen. But the fix has been in on this election for months.

“Mr. Trump, please. I beg you. In all decency, please withdraw in favor of your Vice Presidential nominee, Governor Pence. You do not deserve to win, and now it is all but certain that you will lose. You can try to dismiss the latest revelation of your bad character as “locker room banter”; you can point out that it is from eleven years ago; you can observe that credible charges of sexual harassment and even rape have been made against your opponent’s husband and that she has participated in trying to disgrace his victims. But it will all be to no avail. If you persist in this race, Hillary Clinton, a woman whose character is if anything even worse than yours, will win. But you can do something redemptive, something noble, something patriotic. You can spare the country a Hillary Clinton presidency. Please, please step aside.”

Interested in more national news? We've got you covered! See More National News
Previous Article Here’s What You Need To Know About The U.S Senate Race (10/7/2016)
Next Article Here’s a Dose of Encouragement