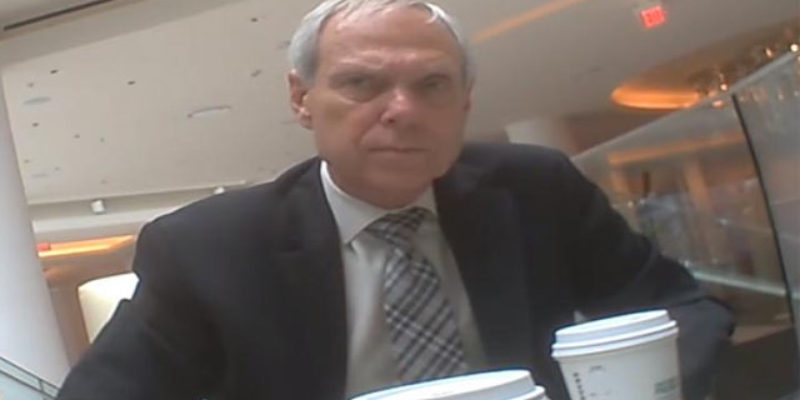 Here’s an image for you…

Cramer at the White House

Creamer, or Cramer (we see it spelled both ways and we’re not sure which is correct; Wikipedia spells it “Creamer”) is an ex-convict who served five months in the federal prison in Terre Haute, Indiana and another 11 months in house arrest for bank fraud and tax evasion following a 2005 conviction. He’s also the husband of Illinois Democrat congresswoman Jan Schakowsky, who is herself a rather noxious political figure. Creamer is credited with writing key parts of Obamacare while incarcerated, and more recently he’s been connected to the formation of the Iran nuclear deal.

Creamer is on video discussing how his organization, Democracy Partners, was behind placing leftist protesters at Donald Trump events in order to stoke violence and generate bad publicity for the Republican nominee; following the release of the video Creamer had to resign his position on the Democrat National Committee.

“I am unwilling to become a distraction to the important task of electing Hilary Clinton, and defeating Donald Trump in the upcoming election,” Creamer said in a statement. “As a result I have indicated to the Democratic National Committee that I am stepping back from my responsibilities working with the campaign.”

He confirmed that he was referring to the Clinton campaign, with which he was “fully integrated.”

Creamer added that “contrary to the outrageous claims of the notorious right wing blogger James O’Keefe, we have always adhered to the highest standards of transparency and legality in our work for the DNC.”

He says what’s on O’Keefe’s videos are “hypothetical” discussions, which is a lie. Creamer and his operatives directly take credit for shutting down a Trump rally at Chicago State University in March.

And now we know that this man has the ear of the president of the United States; he’s at the White House on a constant basis.

This is who runs the country. Are you comfortable being governed by Bob Creamer?

Interested in more national news? We've got you covered! See More National News
Previous Article VIDEO: PragerPedia?
Next Article BAYHAM: What Trump Needs To Do, And Not Do, In The Third Debate