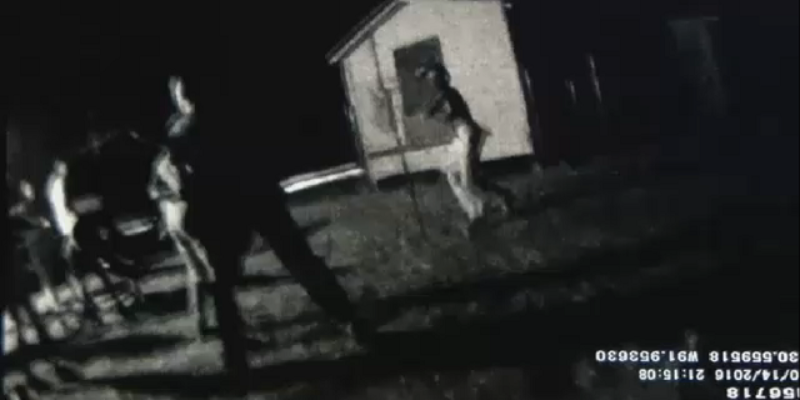 This body cam footage comes from Port Barre out in Acadiana. Police were responding to a hit and run call and when they found the car that did it, this fight ensued.

Police say just after midnight on October 15th, they were called to the 100 block of East Courtableau in reference to a hit-and-run. The person who called 911 said the person was driving recklessly, spinning tires, lost control, struck a tree, a parked vehicle, and a trailer then drove off.

Officers found the vehicle at a nearby home.  They said Lybeth Hardy and her 15-year-old son answered the door, but they started cursing at officers telling them to get off the property.  They reportedly refused to answer questions and wouldn’t allow them to speak with the owner of the vehicle, Hardy’ s husband because he was allegedly sleeping.

Hardy says it was the officers who were cussing and being overly aggressive. Lybeth Hardy said, “Y’all would have seen how aggressive they were they came to the door cussing and hollering with no respect no tone of respect in their voice and Deon is going to say he was proud of his officers. I don’t know how you take pride in that.”

Police say Hardy told them she was in the vehicle with her kids, but she wouldn’t say who was driving.  At the same time, about a dozen people had gathered from around the neighborhood as police say the teenager continued to curse and threaten officers.  Police indicated that others from the neighborhood began approaching officers in an aggressive manner as well.

As the cops moved to arrest Hardy, cops were forced to use pepper spray to defend themselves. Hardy’s son then took a fishing pole and hit a cop on the head. The officer was forced to draw their pistol and the kid ran away. Hardy’s daughter hit cops with a chair.

Two officers were taken to the hospital with non-life threatening injuries and Hardy and her two kids were arrested for their role in the attack. The kids were booked and released while Hardy was bonded out of jail.

The quick thinking and restraint of these officers prevented this incident from turning into yet another Ferguson. For that, the Port Barre police deserve kudos.