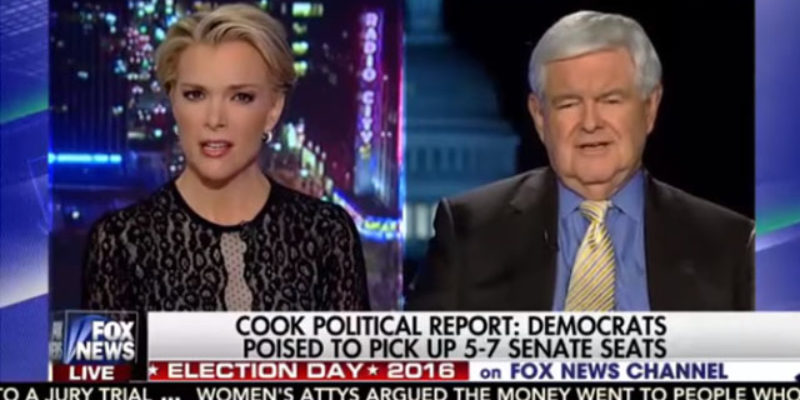 …the Trump fans are all torqued up about it and claimed that Gingrich “destroyed” Kelly over her persistent questioning on the subject of Trump’s alleged misbehavior and boorishness where women are concerned.

So did Gingrich really “destroy” her?

I’m going to stipulate that I can’t speak to the daily content of Megyn Kelly’s show – because I gave up on cable news six months ago and only on rare occasions will I put on Fox News or CNN or even CNBC. There is only so much of the food-fight BS you can watch before it starts to invade your interpersonal dealings with actual human beings, and that constant antagonism has begun to poison our culture.

People on the Left and on the Right who spend all day watching cable news – or, in the case of the Right, listening to talk radio or, in the case of the Left, watching the Daily Show or Colbert or the douchey Brit who comes on Sunday nights on HBO – drink that style of discourse in and then spew it right back out on social media, complete with the clownish, over-the-top personal attacks and the refusal to accept that the other side has anything worthwhile to contribute to the discussion. After a while, you begin to realize that these daily food fights are contrived for a reason – which is that cable news isn’t journalism; it’s entertainment masking as journalism.

Megyn Kelly brings Gingrich on as a Trump surrogate to talk about an election for seven minutes, and any intelligent discussion of Trump’s chances to win probably entails 20 minutes at least. And this is a long segment for such a show. You’re not getting sober analysis, you’re getting sound bites. It’s a waste of your time.

Is he right that Kelly is obsessed with sex? Of course he is. She wants to talk about Trump’s misbehavior because it’s easy and it’ll get her ratings in the 25-49 demographic that all cable news channels covet – those channels can get old people, who have more intelligent ideas about the proper role of sex in everyday life and also in politics, to watch practically 24/7 but the 25-49 crowd doesn’t have the time or the inclination to sit there and watch people argue about politics all night. So you have to feed them Trump’s “grab her by the p**sy” video and talk about it for two months solid.

Gingrich is right that the media completely overplayed that stuff and did a disservice to the American people in doing so, and at the same time the wall-to-wall sex stuff derailed Trump in the polls.

But he acts as though that doesn’t matter on Election Day. Of course it matters. Because as sordid and cheap as “grab her by the p**sy” might be, and as weak a rationale for picking a president as it is, Americans would really rather not have a cad or a boor as president if we can help it. And what’s on that video, together with the parade of (mostly lying?) women who came forward to allege that Trump did to them exactly what he said on the Access Hollywood hot mic, shows that he’s without question a cad and a boor. You don’t have to believe Rachel Crooks or Jessica Leeds to recognize the basic truth that this is not a gentleman and he never has been.

And that’s something which does, and should, make voters uncomfortable. Gingrich has stepped back from his position as a Trump surrogate enough to allow such an admission in the past; it would have done him a lot of good to admit it in this clip. Yes, Trump’s character is an issue in the race and yes, if he were to behave in such ways as president it would damage his effectiveness in governance. That isn’t a fatal admission; in fact, it lends credence to the case he attempts to make that the Clintons have the exact same problem given Bill’s behavior, and in addition with the Clintons you have the further infirmity of blatant, rampant Third World corruption and influence-peddling which call into question whether it’s the American people rather than donors to the Clinton Foundation Hillary would actually be swearing an oath to on Inauguration Day.

You’d get that kind of discussion if this wasn’t a food fight. Instead you get accusations that Megyn Kelly is obsessed with sex and you have two highly-paid adults yelling at each other like high school kids.

You guys might find entertainment in this. For me, it’s depressing and moronic.

The only interesting part of the discussion to me is the beginning part, where Gingrich tries to make the case that you have two completely different realities in which on one hand you have the Cook Political Report which has all but given the Senate to the Democrats and the polls which say Hillary has a commanding lead both nationally and in the electoral college – even states like Texas and Georgia may go blue this year – and on the other hand you have snippets of anecdotal information which show more hopeful signs for Trump and the GOP. Even within that analysis Gingrich admits that Trump’s chances of winning the election are one in three; if Kelly had done a better job she would have latched on to that and asked him why a nominee with just a one in three chance of beating Hillary Stinking Clinton isn’t a lousy nominee.

But instead it devolves into an argument about sex. If I’d been watching it live I’d have changed the channel.