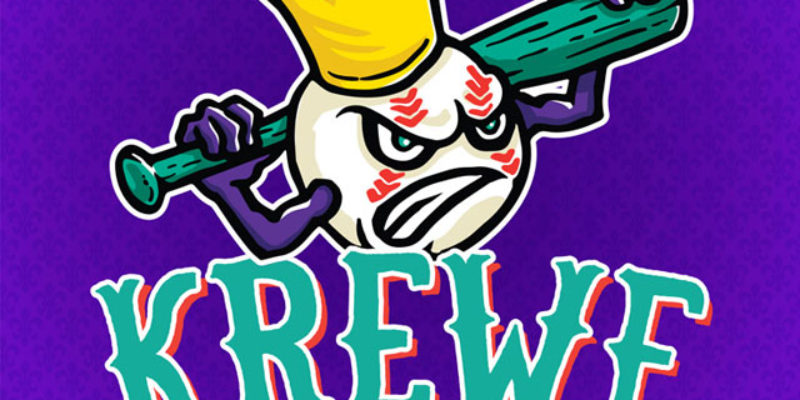 On Wednesday, Innovative Advertising held an internal design competition in which employees developed potential new names and logos for the New Orleans Baby Cakes, following the public and media backlash over the baseball team’s rebranding efforts.

The three team names (logos attached) resulting from the three-hour competition were as follows: New Orleans Mud Bugs, The Krewe and Satchmo’s.

The rebranding of the formerly known New Orleans Zephyrs was off track from the beginning and ultimately struck out with fans, local media and even some national media.

The original premise of having fans submit ideas for logos and designs can be a good business and public relations move, however, the Zephyrs went about it in the wrong way. For starters, the team used San Diego, California-based firm Brandiose, to take the lead on the rebranding process. Representatives from the company said they learned much about Louisiana and its culture during their two-day visit to New Orleans in October, but judging from the final decision, it does not appear that was the case.

“Why would the Zephyrs not look to any of the great local agencies we have right here in the New Orleans area?” said Jay Connaughton, owner and managing partner at Innovative Advertising. “We live here, and as locals we know that a two day visit by a California company is not sufficient to truly understand the wonderful and truly unique people of our community.”

Innovative Advertising believes thorough research and message testing in advance of creating or reinventing a brand is imperative and could have kept the Baby Cakes from missing the mark. Now, they are learning the lesson of the importance of an impactful, resonating brand to short and long-term business development. Innovative Advertising has worked with some the regions most recognized brands, such as Abita Beer, P.J.’s Coffee and the New Orleans Wine and Food Experience.

“Creating a solid brand should always begin with proper planning, research and understanding of the audience. In the end you want to create a strong personality that customers love,” said Jay Connaughton, owner and managing partner at Innovative Advertising. “At the core of that is true understanding of your target audience. Something was really off here and now a brand once known for his historical link to Pontchartrain Park is a local laughing stock. It’s really disappointing.”

To demonstrate how local involvement could have quickly set the Baby Cake rebranding on a better track, Innovative staff was challenged to a three-hour internal competition. The difference in the two rebranding efforts was that the Innovative creative team followed the appropriate rebranding process with a true understanding of our local audience, while the Baby Cakes relied on an the opinions of a California firm with little exposure to Louisiana or its people.

Fans can visit NoBabyCakes.com to view Innovative’s logos and sign a petition asking the team’s ownership to reconsider the name change and choose a new name more appropriate to the culture and history of New Orleans.

The logos Innovative came up with are…

Of the three, we’d go with Krewe of New Orleans; it’s the catchiest of the bunch, it doesn’t end in “s” which makes it unusual and it cuts to the uniquely New Orleans spirit of the bunch.

And we don’t have any particularly talented graphic artists here at the Hayride, so we can’t show a logo for them but we’ve got two other nominations to throw into the mix.

One being Snappers. After all, red snapper is one of the most ubiquitous fish swimming around in the Gulf off Louisiana’s coast, and fishermen love catching them because they put up a heck of a fight. They’re also pretty good eatin’.

The other one, which appears to be even more popular than Snappers with the folks we bounced it off of, is Zulu Kings. That’s as deep a Mardi Gras reference as Krewe is, and it has the added benefit of being a name so fraught with “cultural appropriation” and, to people who have no idea what they’re talking about and have never been to New Orleans, “raaaaacism.”

To which black folks in New Orleans might respond, “No, seriously, this is fine.”

The rollout of that name alone would make it worthwhile, and the abject badassery of the logo you could use, with the traditional Mardi Gras face-paint of a white circle around King Zulu’s left eye and another around his mouth (this is what we’re talking about, by the way)…

…could make for some kick-ass branding and actually help promote the heck out of both Mardi Gras and one of its most iconic krewes. After the thoroughly entertaining apoplectic reaction by the politically correct crowd has washed out, that is.

Not to mention the traditional throw at the Zulu parade is a coconut. Stitch up some coconuts, even if they’re plastic or fleece, with baseball seams and you’ve got yourself a prime merchandising opportunity.

Instead, we have Baby Cakes.

And the sneaking suspicion that this stupid team name was chosen for the purpose of depressing attendance so as to let the team out of its stadium contract and give it the freedom to alight in another market where a local government can be hooked into giving freebies Jefferson Parish and the state of Louisiana will not.

Interested in more news from Louisiana? We've got you covered! See More Louisiana News
Previous Article AVALLONE: I’m Getting Obnoxious Demand Letters And Calls From Democrats, Too
Next Article KENNEDY: If You’re From Louisiana, It’s More Likely Than You Think That You Own Unclaimed Property