Last week we mentioned that enrollment in Louisiana’s expanded Medicaid program has been higher than expected since Gov. John Bel Edwards made the decision to attach Louisiana to that part of the Obamacare plan.

And one reason for it could be the skyrocketing cost of private insurance thanks to the “reform” of the industry Obamacare mandated. Insurers have to cover pre-existing conditions and lots of items that, were it up to consumers, probably wouldn’t be chosen as options.

As a result, the pool of insurance customers has gotten smaller, older and less healthy – young people without a discernible prospect of needing medical care simply aren’t buying overpriced health insurance, so the “death spiral” predicted by so many has begun across the country. And folks who would otherwise buy private insurance are instead going on the expanded government plan, which they will certainly find out is, as Sen. Bill Cassidy has called it, “the illusion of health insurance.” All across the country.

Rate increases have been posted for “Obamacare” plans offered by three health insurers in Louisiana, with Blue Cross and Blue Shield boosting rates as much as 41 percent on average for 2017, although some customers may see premiums skyrocket by 54.7 percent.

The Advocate reports the increases don’t mean everyone will pay more for coverage. Under the Affordable Care Act, consumers who make between 138 percent and 400 percent of the federal poverty level are eligible for financial assistance. Those subsidies increase as health premiums go up.

In its filings, Blue Cross said the higher rates were needed for a number of reasons, including an expected increase in utilization and cost of services, to cover taxes and fees, and the end of a federal reinsurance program that helps protect insurers from costly claims.

The reinsurance program made $7.8 billion in payments for Affordable Care Act plans sold in 2015.

And how does that translate into the real world? This is how. 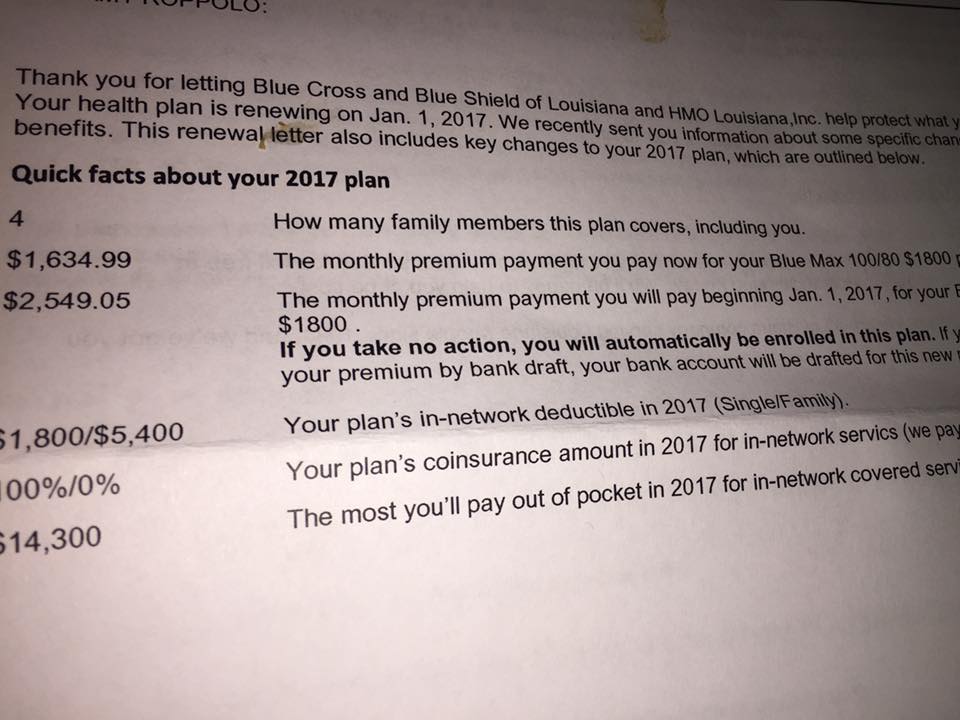 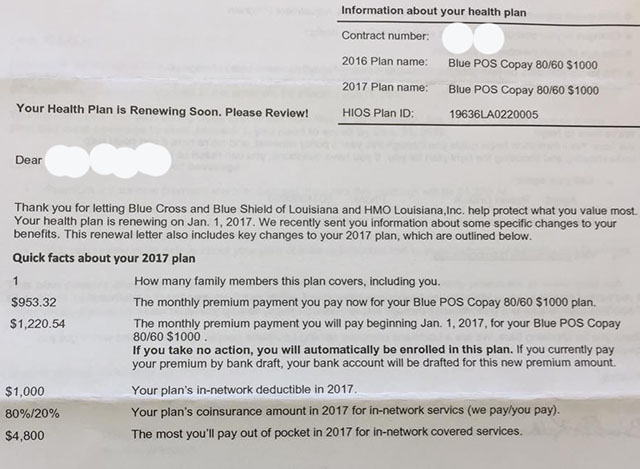 Social media is full of these letters. They make for a brutal story for Louisiana’s middle class – that $300 monthly premium increase, or $1100 monthly premium increase, reflects meals not eaten in restaurants, family vacations not taken, new cars not purchased, home improvements foregone, investments and savings not made, businesses not started. That’s money which is sucked out of the productive economy of this state and packed off to insurance companies headquartered elsewhere. In the case of Blue Cross, the headquarters is at least in Baton Rouge – but Blue Cross is still not a better place for your additional $300 per month than your bank account is.

Nobody is getting a raise in Louisiana to pay these premiums.

And for those getting health insurance through their employer, the situation is little better. Business owners across the state are seeing similar rate increases and saying no to new hires, pay increases, investments in research and development or new equipment, business expansion or even the company Christmas party, because health insurance functions as a confiscatory tax increase.

In the case both of employer-based and individual-market health insurance, the quote from the old 1980’s movie War Games begins to apply: the only way to win is not to play. And you will see more and more of this – people will stop buying health insurance.

This can’t be fixed from inside Louisiana politics. It can only be fixed nationally. And we all know the fix Hillary Clinton wants is the one she attempted as First Lady back in 1993 – single-payer, socialized medicine. Free for everybody.

And if you think Obamacare is expensive, wait until you see that.

A week ago, Rebekah Allen wrote a piece, that we mentioned in last week’s Hither And Yon, about LSU’s athletic fundraising outstripping the fundraising on the academic side. LSU president F. King Alexander, in a letter to the Advocate’s editors, took issue with Allen’s article, but interestingly his grousing seemed to validate a lot of the points the article made.

The Advocate’s recent story on LSU’s athletic versus academic fundraising was a disappointing take on a very important issue. Rebekah Allen painted our university as an outlier among SEC universities.

After noting that LSU’s athletic department doesn’t get any money from the state and actually contributes to the academic side, which we would argue means that some $8-10 million of what is raised for athletics at LSU is actually raised for academics and perhaps the numbers ought to be adjusted accordingly, Alexander proceeds to whine about all the money pulled out of general fund state appropriations for LSU. Which has nothing to do with the school’s performance in private academic fundraising, and is furthermore something of a non-sequitur since LSU has raised tuition to compensate for most of that state general fund money being lost, with most of that tuition increase being covered by the TOPS program.

Then he offers this…

We are proud of our athletic program’s fundraising successes and accept the challenge to make our academic fundraising just as successful. Our academic performance is already nationally competitive, thanks to the efforts of our faculty and the impacts of our donors’ generous gifts.

The bottom line is this: fundraising is an integral part of LSU’s continued efforts to help our faculty and students change the world. Donations support our students’ pursuit of excellence, and help our faculty take their work from ideas to actual solutions for our state’s challenges. LSU produces exceptional graduates who carry little-to-no debt and make extremely competitive starting and midcareer salaries, and who go on to win Pulitzer Prizes and run Fortune 500 companies. Our faculty produce work that keeps us safe from hurricanes, improves medical treatment and disease prevention, and improves day-to-day life in our communities.

In other words, what happens at LSU benefits every citizen of Louisiana — and beyond. We hope The Advocate’s story, combined with the great things we are doing at LSU, will inspire our alumni and supporters to be even more generous toward our academic endeavors in the future.

Whoever is advising Alexander on his public communications might consider a different career. He would have been much better off not saying anything than by griping about an article pointing out a problem and then admitting it exists.

And if LSU wants to fix this problem it needs to demonstrate that it’s committed to the same level of excellence in academics that it clearly aspires to, and sometimes even achieves, in athletics. Alexander’s tenure at LSU has been marked by never-ending demands for more tax dollars rather than selling the deliverables he has on offer; it’s little surprise the academic fundraising needle hasn’t moved much. We are hopeful that former Louisiana Economic Development secretary Stephen Moret, who is eminently capable, will change the university’s fortunes from his new position as head of the LSU Foundation; it would have been nice if Alexander had addressed Moret’s presence and plans in his op-ed rather than grouse about the bad publicity.

It’s supposed to rain today, which is a bit of a change. Since the floods in August, it’s barely rained at all in south Louisiana.

Things are so dry out here that they’ve lended a bit of additional fall color around the state, as grass is turning brown along with the leaves on the trees.

And of course, there is this…

Due to the extremely dry conditions within the state, Louisiana State Fire Marshal, H. Butch Browning and Agriculture and Forestry Commissioner Mike Strain have ordered a prohibition against all private, outdoor burning in all but four of the state’s 64 parishes.

The order went into effect Saturday and shall remain indefinitely. Violation of the order could result in criminal or civil penalties.

The ban does not include the following parishes: Bossier, Iberville, St. Landry and St. Mary.

A burn ban? In Louisiana? Boy, that’s an eye-opener.

Let’s hope this ran comes hard and heavy and gives us a good shower. And then let’s have it get out of here for the weekend.

And now, for Today’s Last Thing. Which is that next year Baton Rouge will celebrate the 200-year anniversary of its founding. So last week the tourism officials and various other muckety-mucks in town decided they’d offer up a gimmick to serve as a public manifestation of the celebration.

A mascot, in fact.

So what’s the mascot gonna be? Why a red stick, of course. 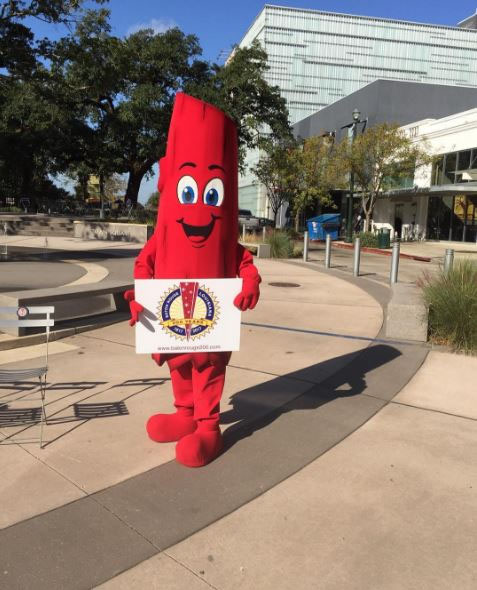 They’re going to have a naming contest soon, too.

We couldn’t help thinking of this, which circulated a bit after Colorado legalized weed…