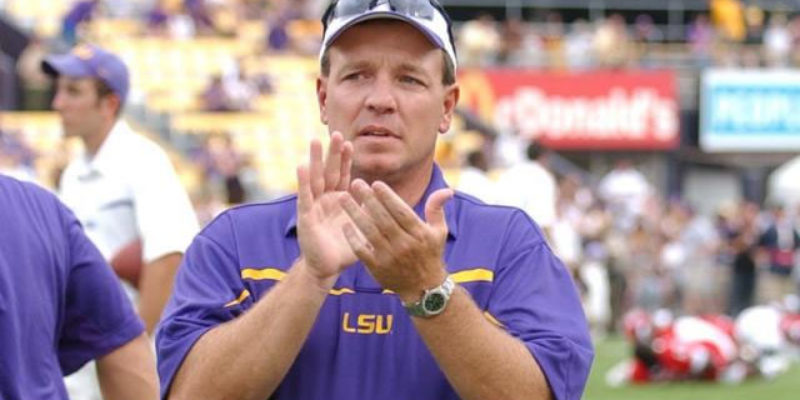 Our last dispatch from the LSU Coaching Search saga, which had a tweet from Panama City, Florida sports radio host Scott McKinney to the effect that LSU was going to make an offer to Tom Herman as the new coach by today, noted that if McKinney’s report was true it would likely have been an attempt to find some leverage in negotiations with the real favorite for the LSU job.

That being Jimbo Fisher.

Last night, Glenn Guilbeau offered up a column talking about the full-court press Fisher’s agent Jimmy Sexton is putting on LSU in the final days of what’s been a very long courtship between the two…

Jimmy Sexton, the most high profile agent for college football coaches in the country, is upping the ante for LSU to acquire the services of Florida State football coach Jimbo Fisher, according to two influential members of the Tiger Athletic Foundation fund raising arm of LSU’s athletic department, as interim coach Ed Orgeron’s “audition” fell in a 16-10 loss to 12-point underdog Florida on Saturday.

LSU, through the TAF and major donors, is prepared to pay Fisher $6 million or more as he makes $5.2 million at Florida State as well as pay his $5 million buyout to Florida State, but there are other demands being bantered about, such as a lucrative housing allowance as there is no state income tax in Florida as there is in Louisiana.

Negotiations with Sexton could reach a head on Sunday or Monday as Fisher’s No. 14 Seminoles (8-3, 5-3 Atlantic Coast Conference) end the regular season at 7 p.m. Saturday with a home game against No. 13 Florida (8-2, 6-2) on ABC. Florida State is out of the running for the ACC Championship Game and is headed for a second tier bowl, so Fisher will have some time to decide if LSU offers him the job.

LSU athletic director Joe Alleva had contact with Fisher last season when he was in the process of firing then-LSU coach Les Miles, but that fell through when LSU president F. King Alexander intervened. Alleva has been in contact with Fisher in recent weeks, particularly after LSU’s 10-0 loss to Alabama on Nov. 5, through third parties on both sides.

And late last night, a post on the LSU message board TigerDroppings.com reported that a deal may have been concluded with Fisher…

I’ve been informed by all three sources (personal friend being the most connected) that Jimbo Fisher, barring any sudden wedge being driven like last year, has accepted LSU’s offer to become head coach for approximately 6.75 million with incentives to bump it to 7.5 million, the housing stipend was never an issue and it wasn’t about Louisiana state income taxes as LA property tax vs FL property tax is virtually a push and not an issue as far as net income is concerned.

I was also informed that Aranda would be retained but that in the event he suddenly bolts that Jimbo will be making a hard push for Jeremy Pruitt and that we would pay similar to Cam Cameron’s salary as a coordinator. O’s status is currently unknown as LSU is keeping that headline alive until the season’s end in what was basically described to me as a sideshow to keep the media (mostly ESPN) from running with misinformation and letting the O conversation dominate their headlines.

We reference that post only because after running it past a couple of our own LSU sources we’ve been told it’s more or less the inside word on what is happening. There are still six days until LSU hopes/expects to announce its new coach, though, so this information could be correct as of now and vaporize at any moment between now and Monday.

Fisher’s salary at Florida State is $5.2 million this year. He gets an automatic $100,000 raise each year of the contract through 2022. In 2022, he cashes in on loyalty bonuses and other non-salary compensation to make his overall package worth some $44 million over the life of a seven-year contract.

If the above information is correct, his contract at LSU would be guaranteed at $47.25 million, plus another $5.25 million in potential incentives over the course of seven years for a total potential package of $52.5 million. Fisher’s guaranteed compensation increases as a result of jumping to LSU by nearly $8 million dollars – he’d be going from $32.7 million in salary between 2017 and 2022 to $40.5 million at LSU over the same time frame.

Which is a very, very lucrative contract. Only Jim Harbaugh’s $9 million-per-year deal at Michigan would be clearly more lavish than Fisher’s at LSU.

The word last year when LSU was talking about hiring Fisher was that it would be a 6-year, $36 million contract, with incentives and so forth piled on top of it. Minus the incentives, LSU will have spent $4.5 million more in signing Fisher this year as opposed to last year.

Plus LSU will have paid Les Miles $4.3 million in salary, rather than paying a prorated buyout. Let’s understand that Miles’ buyout figure is likely a fiction, because he’s more than likely going to get a new coaching job this year and the pay from a new job offsets LSU’s buyout obligations to him. Miles would have been even more marketable last year without the four-game clunker that ultimately did cost him his job, and therefore it’s entirely possible firing Miles would have cost the school nothing – or better put, it would have cost LSU’s boosters nothing, because it was outside money which was committed to pay that buyout.

And LSU, which is 6-4 and heads into Thursday’s season finale against Texas A&M without Leonard Fournette and Kendall Beckwith, arguably its two best players, was a preseason Top 5 team that was within one play in each of three losses of being 9-1 and fulfilling the opportunity to make the college football playoffs. When Fisher made the national championship game in 2014, Florida State’s income off football jumped 33 percent, to $57 million – that’s nearly a $20 million bump. Call it half that just for making the playoffs, and say it’s a $10 million loss to LSU from things like merchandising, potential ticket price increases and so on.

In other words, if the reports are true and Fisher will be named LSU’s coach Monday at a total package of $7.5 million per year, the decision to retain Miles last year rather than follow through on the judgement of the athletic director could well have been a $15-20 million mistake, and a wasted season which could well have ended up in the college football playoffs.

LSU fans should be glad, and hopeful that these reports are true. If they are, Fisher will be the most celebrated and accomplished coach ever hired at LSU upon his hiring. While others, like Skip Bertman and Nick Saban, became legendary coaches based on their achievements at LSU Fisher will have already filled his trophy case with two playoff appearances, a national championship, four conference titles, a Heisman Trophy winner and three first-round draft choices at quarterback from his tutelage surrounding a 76-17 record. Fisher would be a good bet to remedy LSU’s long-standing backward offense and as sure a bet as is attainable to return the program to its past status as an annual national championship contender.

If he’s as good at LSU as he’s been at Florida State, he’ll pay for himself. The money really isn’t all that much of an issue.

The regret about Fisher’s hiring, if the reports are accurate, isn’t how hard a bargain Sexton drove. The regret will be that this wasn’t done last year. And it’s going to become time to ask for some accountability for the people who stopped it from happening.

Interested in more national news? We've got you covered! See More National News
Previous Article VIDEO: Tucker Carlson Did It Again Last Night
Next Article Trump’s Announcement About Not Prosecuting Hillary Should Be Put In Perspective