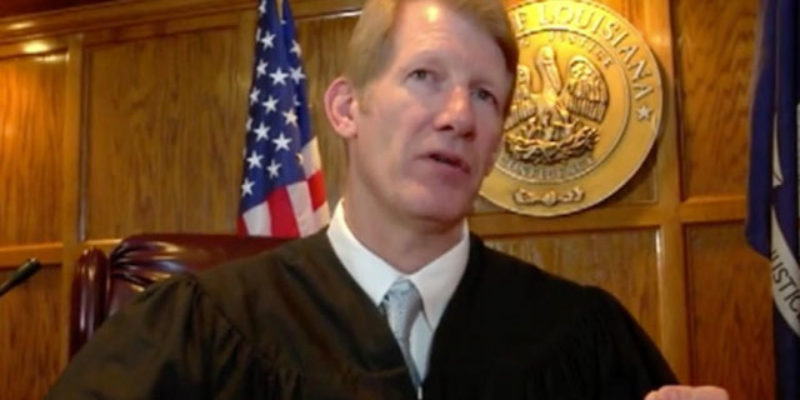 …so far it’s not happening for him.

A quick story from AP…

A federal judge is being asked to take another look at the Louisiana Supreme Court’s removal of one of its own justices from an environmental damage case, The Associated Press reports.

Landowners and their attorneys on Tuesday asked Vance to reconsider. They argue that their free speech rights are violated by Hughes’s removal.

The 2012 Supreme Court race was a master stroke of political spin – Hughes managed to emerge from a crowded field that included six Republicans to make the runoff against John Michael Guidry, a black Democrat with a better record of judicial decisions from a pro-business perspective than Hughes did. It was a rare case in which business groups like LABI actually backed a Democrat over a Republican, but Hughes managed to win the seat over Guidry largely along racial lines.

This all happened because of a sizable chunk – more than $750,000 – spent for Hughes by a PAC funded by “legacy lawyer” John Carmouche, who specializes in suing oil companies for “environmental damage.” We’ve covered these legacy lawsuit cases before here at the Hayride; most of the time they’re scams which get plaintiff attorneys huge payouts without actually doing anything to improve the environment, and oil companies have been screaming bloody murder over the fact Louisiana has become a judicial casino for such cases when no other state even has them in any great amount.

And Hughes is on the Supreme Court because Carmouche’s money, which bought a bunch of ads touting his commitment to the 2nd Amendment, gay marriage and a host of other conservative issues which almost never get heard in front of the Louisiana Supreme Court, turned him into the “true conservative” in the race, rather than the trial lawyers’ best Republican friend.

So Hughes gets to the Supreme Court and his fellow judges known he’s got a conflict, and they won’t let him sit in on the cases Carmouche put him on the Supreme Court for. They’re not stupid, and while almost nobody pays attention to judicial races in Louisiana they certainly do. That’s why he’s trying to sue the court he sits on.

And it doesn’t look like it’s going to work.

One wonders, if Hughes can’t actually fulfill his promises to the folks who made him a Supreme Court judge, whether they’ll find somebody else to spend three quarters of a million dollars on. Hughes is up for re-election in 2018.

Interested in more news from Louisiana? We've got you covered! See More Louisiana News
Previous Article Could A Lack Of Confidence In Joe Alleva Be A Factor In The LSU Coaching Search?
Next Article LSU Student Brilliantly Trolls Anti-Trump Protesters In A Letter To The Editor