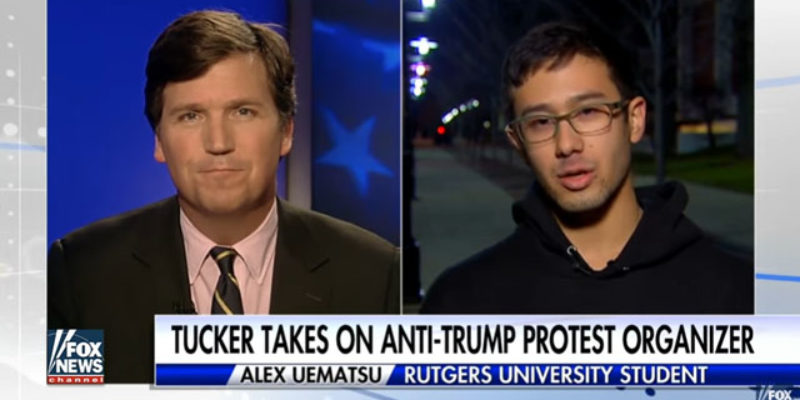 Via Hot Air – Larry O’Connor’s writeup of this is absolutely spot on, as he points out why Carlson’s new show on Fox News is such a colossal improvement over that network’s usual food-fight fare…

Wednesday night’s broadcast provides a perfect example of why you’ve got to watch or DVR this program.

Carlson had a segment on the anti-Trump protests that have continued in major urban centers for the past week. Rather than invite a panel of pundits to hand-wring and argue over who’s to blame or what should e done he engaged directly with one of the protesters in an interview that needs to e highlighted on every Faceook page in America.

Behold Tucker Carlson, untilizing his affable wit and informed logic to challenge the very premise of Rutgers student Alex Uematsu’s reason for protesting President-elect Trump: Immigration policy. Carlson begins his interview with a simple question: “Who do you think has a right to come to this country?”

Uematsu, bless his heart, took the bait and relexivly answered that everyone has a right to come to America. From that point the Rutgers student was forced to defend his position and the logical outcomes of his simplistic notion. Clearly defending his position is something he had not been forced to do in his many years in academia because Carlson picked apart every angle of his Utopian, border-less dream.

Here’s the clip. It goes five minutes and it’s a lot of fun. Uematsu, who has absolutely no idea what he’s talking about, walks right into some very basic questions that he cannot answer and rather than lecturing or berating him, Carlson just flashes an amused smile and moves on to the next stage of Uematsu’s humiliation.

It’s a complete evisceration, but it’s not practiced with malice or nastiness. He’s just talking to the loons, and giving them a chance to impale themselves.

Great show. It’s only been three days, but we’re hooked.

Interested in more national news? We've got you covered! See More National News
Previous Article ‘Peak Oil’ On Hold Again As The Largest U.S. Oil Strike Ever Is Made In West Texas
Next Article The Red Bayou Show, Episode 66 – Featuring Life In Trumpworld, And The LSU Football Coaching Search