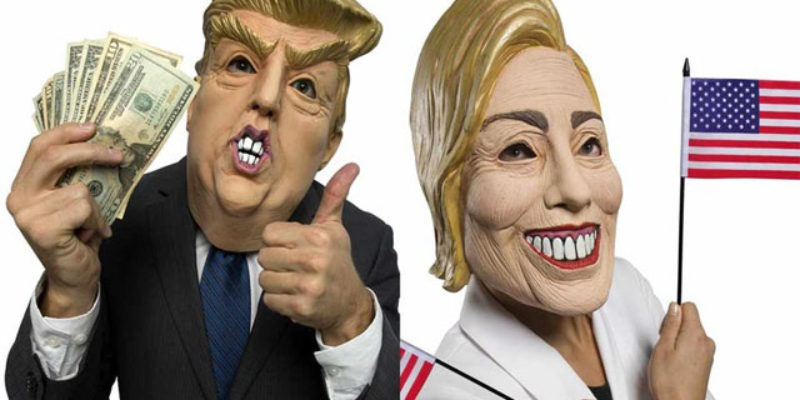 Halloween has come and gone…or has it?

We are still surrounded by scary characters belting out bone-rattling sounds that send chills down every spine and fear through every heart. Safety seems impossible to find and danger still lurks behind every corner. Tantalizing free stuff is still being given away almost on demand and excessive consumption of all that loot leaves many of us feeling ill.

The harrowing truth we all can agree on is that this creepy fog doesn’t have a chance of lifting until election day on November 8th.

That’s right, it is still election season, and candidates continue to don their masks, pretend they are something they are not and explain why they alone offer the best candy on the block.

Throughout this Halloween-inspired election, fear has been the primary selling point.Candidates are asking for your vote primarily by explaining the horror of the other choices. Their costumes hide their true intentions while their words are meant to scare the hell of out of anyone daring to pick the other person.

Remember when Americans ran for political office by saying all the great things we can accomplish as a country? They would speak about the sacrifices made by those before us and our history and status as the leader of the free world, instilling a deep-rooted national pride that prevailed above all our differences.

America has a long history of embracing the debate of competing visions. Different political parties and campaigns have always had stark disagreements about complex issues like the size and purpose of our government or the relations between our people and the strong economy we all strive to build. We used to robustly debate them under the umbrella of national pride and with a hearty respect for the values of freedom, liberty, and justice on which America was founded.

Ronald Reagan often explained his policies best by painting the picture of a shining city on a hill.  George H.W. Bush spoke about a thousand points of light when he described his view of where the country should go. Bill Clinton said he felt our pain and wanted to build a bridge to the 21st century.  George W. Bush ran as a compassionate conservative, and most recently, even President Obama campaigned with a promise of hope and change.

All these men had very different views of what America has been and what it should be, going forward. I personally strongly agreed with some and strongly disagreed with others. But at least they all tried to speak to their policies in a way that was enshrined in the larger message of American values and a vision of the country.

In this election, both major presidential candidates seem to speak more of what they dislike about America than what they love about it. A 24/7 media circus that is desperate for eyeballs and clicks adds unlimited fuel to the fire and constantly fills our airwaves with more about hate than hope…more about venom than vision…more about anger than America itself.

Years from now, will we look back on this election as the moment in time that we stopped viewing America as optimists and instead began viewing our country through the eyes of a pessimist? Shame on all of us if we let that happen.

No matter who wins next week, it is time for everyone in this country to focus more on what unites us, rather than divides us – on our pride in this great nation and what still sets us apart. We should re-focus on the values of individual freedom and responsibility, opportunity for all Americans, and diverse yet strong communities. We should discuss this shared history and vision more with our kids, neighbors and, yes, even those with which we politically disagree.

We must step back and once again rigidly debate ideology without tearing down the idealism of America itself.

One of these two people will be our President-elect next week, but that doesn’t mean we should outsource how our kids view America to them… or the talking heads… or social media. That burden remains with the parents, grandparents, teachers, religious and community leaders and other mentors that have an American duty to explain to the next generation why living in this country is such a special gift that comes with certain responsibilities.

Soon the masks will come off and the scary characters will go back to their hiding places.  Before too long, this Halloween-inspired election will finally come to an end. When it does, let’s quickly move beyond the incessant discussion about election tricks and once again start focusing on the real treats of America – freedom, opportunity, and justice for all.

If you don’t take the time to fill your kids’ bag up with our shared American values, someone else with their own agenda will gladly do it for you.