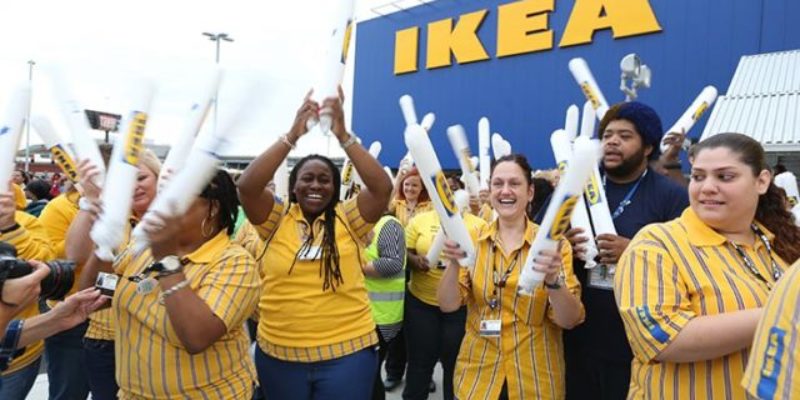 Both parties just got done running a national election on promising paid leave for all American employees. They want to mandate all companies provide their employees a certain amount of time off. The major disagreements are on how to pay for it and how long to mandate it.

But as is the case with most things involving problems that need to be solved, the marketplace is already finding ways to innovate. There is a growing trend of retail employers offering paid leave with Ikea joining the mix.

New parents who work in Ikea’s U.S. corporate office and its stores will be eligible for up to four months of paid or partially paid time off after meeting certain tenure requirements. The policy is unusually expansive for the retail industry, say experts on family leave benefits. For one, unlike companies in the technology or consulting industry that have adopted luxe benefits to help attract more millennial engineers or MBAs to their ranks, retailers require less competitive skills.

“In the United States, retail has, for a lot of reasons, tended to see employees as more interchangeable and to provide less flexibility, including for family leave,” said Ellen Galinsky, president of the Families and Work Institute, a nonprofit research center.

In addition, Ikea’s policy covers not only full-time and part-time workers but offers expansive coverage to fathers, adoptive and foster parents. Katie Bethell, executive director of PLUS, a nonprofit advocacy group for paid family leave, says their research shows that while some national retailers offer six to eight weeks of paid leave for new birth mothers, “it’s really a step forward to be extending that kind of leave to dads and adoptive parents,” Bethell said.

After a year of service, Ikea’s benefit will offer new parents in the U.S. six weeks off at full pay and six additional weeks at 50 percent pay. After three years of service, the benefit will grow to eight weeks off at full pay and eight additional weeks at 50 percent pay. Birth mothers can receive additional weeks off through short-term disability programs, with the number depending on the type of birth. (Up until now, beyond federally mandated protections under the Family Medical Leave Act, Ikea had offered birth mothers short-term disability leave and just five days of parental leave for mothers and other parents.)

Plus, unlike with government mandates, private sector solutions give companies a chance to innovate and use benefits in order to attract and retain workers.

Ikea’s benefit adds an unusual wrinkle to many standard parental leave plans, with the benefit growing in length after employees stick around longer. At most employers, parental leave programs are standard once employees initially qualify. “It’s interesting to see companies experimenting with different models,” Bethell said. “That seems to reflect viewing parental leave as a retention strategy that’s on the table.”

Earlier this year, Hilton said it would give two weeks of paid leave to all new parents, and 10 weeks to birth mothers, a decision that was highlighted for including hourly workers like housekeepers and front desk clerks. In early October, Chobani said it would offer six weeks of paid family leave to all of its 2,000 workers, many of them factory workers. Soon afterwards, Levi Strauss & Co. said all hourly and salaried U.S. employees with benefits, regardless of gender, would be offered up to eight weeks of paid parental leave.

As a country’s standard of living increases, people demand increased time off from work in order to care for their families. Private sector companies know that they have to meet the demand or they will have problems hiring and keeping workers.

What we have here is the marketplace providing a solution to a social problem in a quicker fashion than politics. It begs the question why we do we have government involved in so many aspects of our lives?