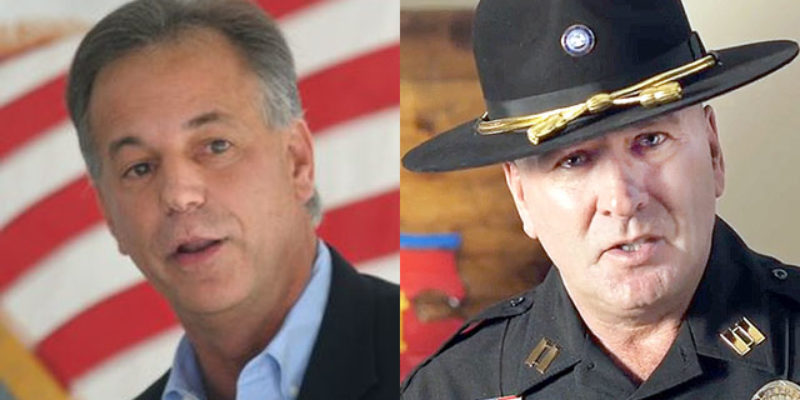 There’s a Clay Higgins PAC which seems to have opened its doors on Dec. 1 – at least that’s when its Facebook page went up.

And on Friday the PAC put out a blistering attack ad which hits Scott Angelle as (1) a Democrat, and (2) a crook.

In case it doesn’t load, try this link.

Angelle’s camp categorically denies everything the ad says. Specifically, from a release Angelle spokesman Ryan Cross put out on Friday…

1.) Scott Angelle voted for Donald Trump. He voted in Donald Trump’s primary and every Republican primary the last several election cycles. He has never missed a presidential election. Clay Higgins has not voted in the last three presidential primaries. In fact, he hasn’t voted in 64 percent of elections over the last 10 years. Clay Higgins wasn’t even a registered Republican during this year’s presidential primary and therefore was unable to vote for President Trump. Records show Clay Higgins only became a Republican seven months ago, prior to running for congress. (Source: Louisiana Secretary of State Records)

2.) Scott Angelle, in his position on the Louisiana Public Service Commission, does NOT regulate SUNOCO Logistics’ assets. According to the LAPSC website, the PSC only regulates “intrastate” pipelines and assets. SUNOCO Logistics’ assets are “interstate” and therefore not regulated by the LAPSC. This ridiculous allegation has been laid to rest in prior campaigns, only to be resurfaced by the desperate Higgins campaign as a last-minute false attack.

3.) Scott Angelle did not give a state contract to a member his family. The project in question was commissioned by St. Martin Parish President Guy Cormier using Atchafalaya Basin Program funding. When Scott learned a company his sister-in-law held a small ownership in (8%) was being considered for the architectural work, he requested Parish President Cormier ensure there was no conflict of interest prior to Cormier signing the contract. The Ethics board ruled it was legal and acceptable and therefore the project moved on as planned. Scott went above and beyond to ensure transparency, accountability and legality on this matter. He should be commended, not falsely attacked.

So who’s the Make Louisiana Great Again PAC? Well, the FEC 24-Hour Report on the PAC shows that it paid Brabender Cox, the DC/Pittsburgh-based consulting firm which has done a good deal of work for David Vitter in the past and John Fleming in this year’s Senate race, some $152,000 for media buys – assumedly largely consisting of the ad above. The PAC is headed by Kyle Ruckert, who was Vitter’s chief of staff.

So far we don’t have any donor information on this PAC – their Statement of Organization was filed with the FEC on Thursday, so it’s all brand new. But there is obviously a decent chunk of change behind it if they’ve got 152K to throw at Brabender Cox on a media push in the week of the election.

All along, Angelle’s major advantage on the field in the 3rd District congressional race has been that he’s the one with all the money. But if there are people – perhaps in the Vitter camp seeking to punish Angelle for withholding his endorsement in last year’s gubernatorial runoff – willing to throw money behind Angelle’s opponent regardless of who it is, that could be a problem for him.

It isn’t like Angelle has stood still while getting attacked. He has his own Super PAC, and they’ve been hammering Higgins on the skeletons in the Cajun John Wayne’s closet – specifically that he owes tens of thousands of dollars in child support to his second wife and over discrepancies in his professional bio, and so forth. The MLGA ad is really just par for the course in a race where both candidates are spouting nearly identical ideological rhetoric; when it comes down to personalities you’re always going to see the campaign get dirty, and this race is just further proof.

There hasn’t been an independent poll on the LA-3 race in a while. There was the Trafalgar Group poll from the middle of last month which showed Higgins in a surprisingly dominant position in the race, which Angelle’s camp decried as unscientific and biased, and then there was the OnMessage poll – which was an Angelle campaign poll – which showed Angelle with a modest lead. Then the Higgins campaign touted a Magellan Strategies poll commissioned by a PAC friendly to the campaign which had Higgins up 50-32.

Nobody really knows where this race sits, but Angelle’s camp has to be nervous. This was supposed to be an easy race against a field of lightweight candidates, and yet he’s had major problems consolidating support as the frontrunner. And now, with a well-funded and brutal ad – which the Angelle camp will spend the final week of the campaign howling is full of lies – those problems could magnify.

UPDATE: Cross put out another statement hammering Higgins as a liar just now…

Clay Higgins can’t help but lie. He lies about his past, he lies about Scott Angelle and now he’s attempting to deceive voters by falsely publishing a news story and attributing it to The Acadiana Advocate.

What’s worse is that Clay’s fake news story is making light of recent investigations into his alleged domestic abuse, unpaid child support and illegal activities. Those issues are not laughing matters and other victims of those crimes would not think his jokes are funny.

Clay Higgins doesn’t even live in the Third Congressional District, he has been caught illegally using public resources to make money under the table for himself and he is now knowingly attempting to deceive voters.

This Saturday, let’s send a message to the establishment. We won’t stand for their lies anymore.

Interested in more national news? We've got you covered! See More National News
Previous Article Apparently The Lafayette Parish Republican Executive Committee Thinks 9/11 Was An Inside Job
Next Article The Cops Are All In For Bodi White In The Baton Rouge Mayor’s Race