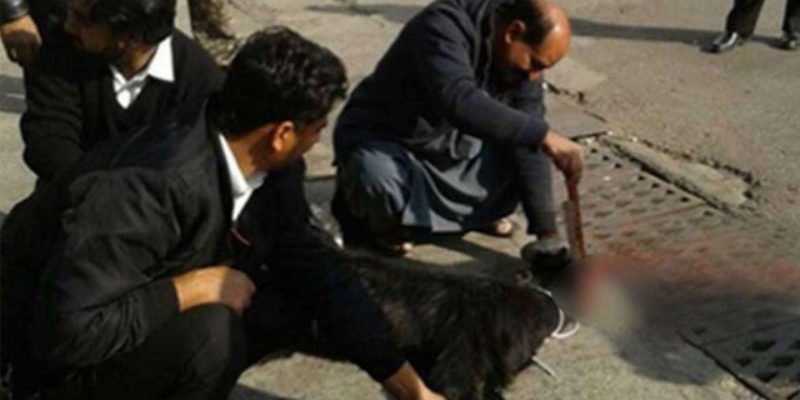 No, we are not joking about this. Via Michael Walsh at PJ Media, Georgetown Law professor Johnathan Turley uncovered this rather “traditional” response to an air disaster on his blog…

Faced with widespread safety concerns, most airlines order shake downs, inspections, and enhanced monitoring. Pakistan International Airlines however had an additional safety measure: the sacrifice of a goat to ward off bad luck. The pictures on social media show smiling airline officials as they practice the barbaric superstition. It appears that some airlines have carry on policies while others have carrion policies.

A Pakistan International Airlines turboprop plane slammed into a mountain this month, killing all 47 people on board.

The sacrifice was confirmed by PIA spokesman Danyal Gilani after PIA grounded its 10 remaining ATR planes.

Walsh was no more impressed than Turley was…

And these are the people Britain and Germany are importing to provide the next generation of high-technology workers.

This is a bit graphic, but…

My freshman year in college was spent at SMU in Dallas, and while it might seem preposterous to some of you I was actually in the honors program there that year. All of us in that program had to take a class which was a mixture of history, anthropology, sociology and a number of other disciplines, but the gist of it was a survey of a number of primitive cultures – Kalahari bushmen, Eskimos and so forth – with a message the basic gist of which was that it is wrong to value one civilization over another.

I can’t help but to remember that claptrap when running across examples such as these. Because the multiculturalist fantasy so beloved by our “learned classes” is based on a lie. Some cultures are clearly superior to others. And the culture of Pakistan, in which it is not considered bizarre or macabre to slaughter an animal on the tarmac as an offering to the Airline Gods, is not one of those superior cultures.

Which is why Pakistanis are available to emigrate to places like Britain and Germany. The ones with functioning brains can’t wait to get the hell out of there.

The problem is that Britain, Germany and other countries in the West, and we are not immune, have become so poisoned by the academic/media/entertainment complex and its slavish devotion to the multiculturalist/politically correct/Critical Theory narratives that they’re unwilling to take steps to assimilate immigrants from inferior cultures. What happens is that people from places where they’ll sacrifice a goat on the tarmac end up having more influence on the host culture than the host culture has on them. Which is a bad thing, because a country like the U.S. or U.K. owes it to its Third World immigrants to assimilate them and make them Brits or Americans through and through. Not to do so is tantamount to allowing children to remain illiterate. They cannot succeed in such a state.

There is no better example of this than in Germany, where just this week a Tunisian ISIS member drove a stolen truck through a Christmas market in Berlin and killed nine people – and then, somehow, got away. It turns out the Tunisian was on a terror watch list and had apparently already been arrested for using a date-rape drug on an unsuspecting female. How this barbarian got into that country in the first place, survived an arrest when he was already suspected of terror connections and then was able to kill nine people with a truck in a crowded market without being arrested or killed himself is beyond understanding, unless you take into consideration the extreme lengths the Germans are going in order to placate the Muslim immigrants they are taking in suicidally-large numbers. Thus a great culture is dying as a First World country is becoming a terror zone.

Because it’s one thing to have an inferior culture in which men in dresses and sandals slash the throats of defenseless animals in an effort to keep planes from smacking into hillsides. It’s another entirely to import that culture into a superior one and then surrender to it.