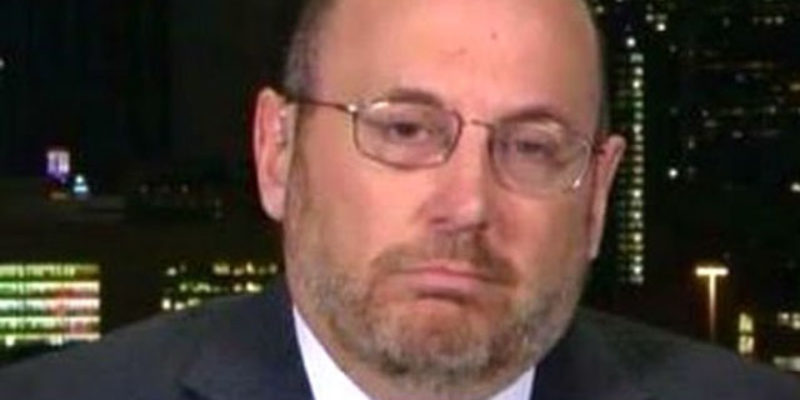 Kurt Eichenwald is said fruitcake’s name, and he appeared on Carlson’s show in an effort to defend a tweet he’d written alleging that Donald Trump was institutionalized in a mental hospital in 1990. That, as you might imagine, went poorly for him; you can watch the painful video of the exchange here.

That was last week. This week Eichenwald found a lot more friendly interviewer; namely, George Stephanopoulos, who let him ramble on for a minute or so about how his allegation was the culmination of a series of jokes, and that he was “signalling” a source to talk to him…or something.

And Eichenwald is now claiming that someone sent him a tweet with a GIF file in it that had a strobe light going off, which made him have a seizure and he’s now getting Twitter’s help to prosecute that villain.

And naturally, Stephanopoulos didn’t even bother to press him on his absurd claims.

—@kurteichenwald said on GMA his Trump mental hospital tweet was part of series of jokes & intended to be “signal to a source” to talk w/him pic.twitter.com/kKj0MqE03I

Stephanopoulos then, amazingly, moved on to other topics rather than get to the bottom of what this assclown did. One wonders what the purpose of having him on was in the first place if it wasn’t to get the full story he wasn’t willing to lay out for Carlson amid all the chirping and bitching about how Carlson wouldn’t let him answer the question.

This is why the mainstream media has so little credibility. Eichenwald is no more responsible a journalist than is Alex Jones, and if anything he’s considerably more demonstrative in his weaselliness. You can’t engage in this kind of foolishness disguised as a member of the Fourth Estate and then turn around and complain about “fake news.”

That’s why the spate of lapel-tearing over “fake news” was met with yawns by the public. Nobody cares about what these clowns think much anymore; they’re just not worth the time.

Interested in more national news? We've got you covered! See More National News
Previous Article VIDEO: In Case You Haven’t Seen The Footage Of The San Pablito Fireworks Explosion In Mexico, Here It Is
Next Article WAIT, WHAT? Pakistani Airline Safety Improvement Efforts Include Sacrificing A Goat On The Tarmac