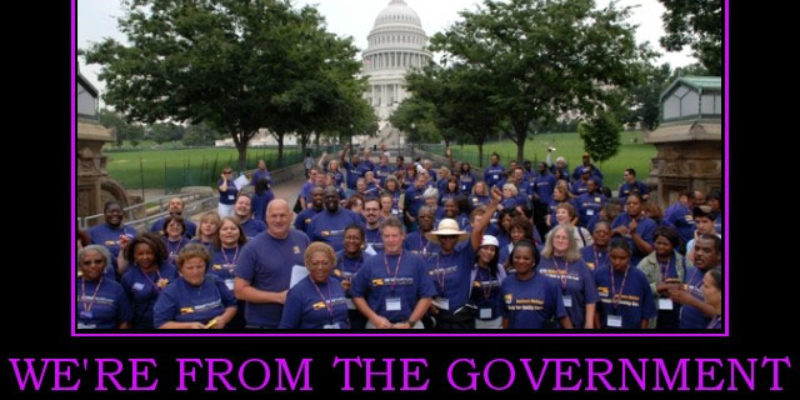 This is assured to make you feel awfully sad…

Federal workers nationwide are bracing for reductions in head counts, civil service protections and salaries when President-elect Donald Trump and Congress turn their attention to government spending later this year.

Trump, who ran on a promise to “drain the swamp,” has identified hiring freezes at most federal agencies as a top priority for his early days in office. Republican lawmakers, many of whom have long advocated for reducing Washington’s workforce, are looking to cut benefits and make it easier to fire poor performers.

The threats and preliminary steps taken by Congress have created anxiety for many of the government’s 2.1 million employees.

“People don’t know what to believe, and they’re in a state of uneasiness,” said Witold Skwierczynski, a Catonsville, Md., who heads the American Federation of Government Employees council that oversees Social Security Administration field offices. “That’s the feeling I hear. People are unsettled.”

As in other areas of his agenda, Trump has offered few specifics about his policy plans. He has promised to make cuts so deep that “your head will spin” and has named Cabinet members who have questioned the purposes of the departments they will lead.

Six of the nation’s 10 richest counties are located around Washington, DC. That’s not the sign of a healthy economy, and it’s a big reason why the voters were willing to give the “You’re fired!” guy from The Apprentice a shot at running the country for four years – everybody who’s had any interaction with the federal government knows that those jobs aren’t particularly demanding, that there isn’t an enormous amount of accountability within them and they pay a fortune for a level of work the private sector would never tolerate.

But you’re going to continue to see dumb articles like this one whining about the plight of “unsettled” federal employees who somehow believe they’re entitled to lives free of job-related stress despite the wishes of the American voters.

Yesterday, in a post largely focused on the performance of Louisiana’s state government Steven Waguespack noted that the “Kodak moment” is coming for the public sector – in which the unstoppable encroachment of technology and the effect it has on the market and consumer expectations will make obsolete those who don’t adjust. Old-school bureaucracies will not survive the early part of the 21st century, and those federal employees who are “unsettled” might consider looking around for other jobs.

A federal job is not a birthright, after all, despite what some of the holders of those jobs may have been led to believe.