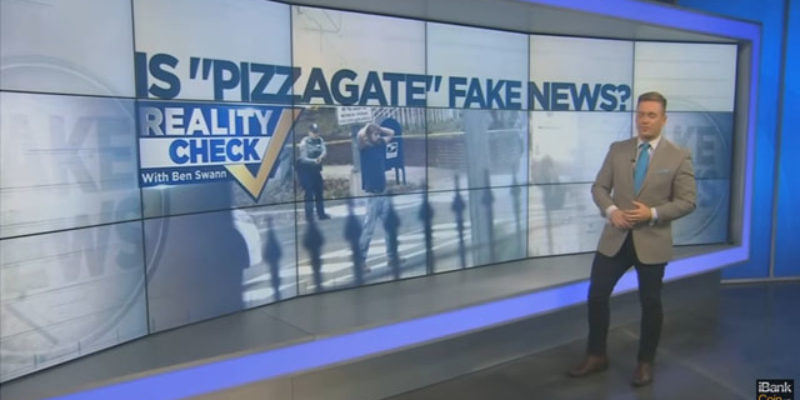 We didn’t play in the Pizzagate pool when it bubbled up out of the muck in November and December, for fear that to do so would be to engage in reporting on material far more salacious and disturbing than necessary in discussing the people around Hillary Clinton, and we don’t have an overwhelming desire to use that to get traffic on this site.

Pizzagate is an awful, awful thing, and we don’t have any particular reason to have confidence it’s a real thing. Therefore, we weren’t going to spend any time on it.

That said, when Ben Swann, the nightly host at WGCL-TV in Atlanta, used one of his reasonably-famous “Reality Check” segments to talk about Pizzagate last night, it gave us a good vehicle to check this box off. See it below.

As an introduction, for those of you who don’t know anything about this, there is apparently a code language of sorts that pedophiles use to discuss their various kinks and perversions with each other, and among the pieces to that code language are references to pizza, ice cream and handkerchiefs – don’t ask us why, we have no idea. There are also a number of hieroglyphic symbols pedophiles use as part of their underground communications. As our readers know, it’s not like they get to talk openly about this kind of thing online; there is serious jail time attached to getting caught with things that are deemed “kiddie porn.”

And when the John Podesta e-mail server was dumped out onto Wikileaks, whether by the Russians or whoever else – it was pointed out amid the ruckus about the intelligence community fingering Russia as the “election-hacking” villain a couple of weeks ago that nobody has actually come out and said the Russians hacked Podesta’s e-mail, as opposed to the Democratic National Committee’s e-mail about which a specific allegation was made – it turns out that there are lots of peculiarities. For example, lots of references to pizza which in a normal context wouldn’t seem to make much sense. Ditto for handkerchiefs, and who even talks about a handkerchief at all anymore?

Add to this some interesting connections, like for example the owner of a D.C. pizza parlor who used to have a gay romantic relationship with David Brock, the eccentric in charge of Podesta’s Media Matters propaganda outfit who is mentioned a number of times in the Podesta e-mails in unusual contexts and the references to friendships with former House Speaker and noted pedophile Denny Hastert, and what you have is Pizzagate. We’re told that there is nothing real about Pizzagate and that might well be true, but here’s where we’ll turn it over to Swann for a fuller accounting of what’s involved…

It should be noted that Swann has his detractors and not everything he’s put on the air is completely top-notch. And boy, the Washington Post did not like this report – WaPo’s media blogger Erik Wemple threw what looks a lot like a tantrum about it. All that said, Swann’s main point remains valid – which is that so far there hasn’t been anybody in law enforcement who has come out and said they’ve looked into this stuff and came away with a clear refutation of it.

That’s not a defense of Pizzagate or an endorsement of any of this being true. There are some peculiarities here which could easily have explanations having nothing to do with pedophilia, and the fact John and Tony Podesta look creepy enough to be pedophiles doesn’t make them so.

On the other hand, the screaming by the Daily Beast and Washington Post aside, Ben Swann’s Pizzagate Reality Check is hardly the most egregious abuse of the media even this week. And if you watch that video you’ll at least know what this story is about whether it’s substantive or not.

Interested in more national news? We've got you covered! See More National News
Previous Article This Might Not Be The Best Marketing Campaign We’ve Ever Seen…
Next Article LANDRY: The Senate Should Confirm Jeff Sessions