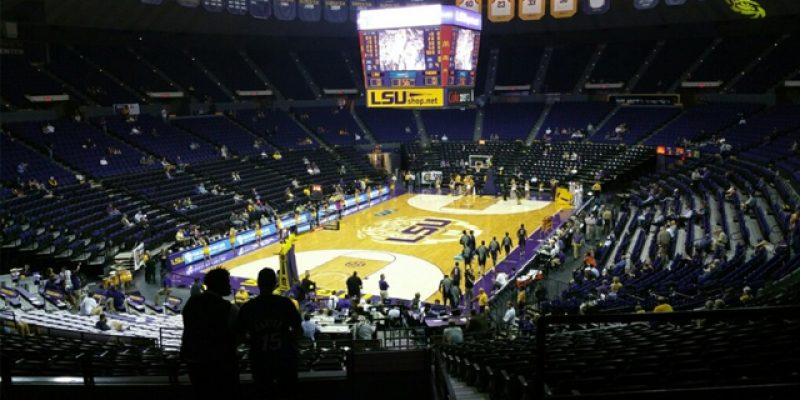 …this will blow your mind.

A CONCURRENT RESOLUTION To commend Collis B. Temple Jr. for his continued support and commitment to varsity basketball at Louisiana State University and to acknowledge his significant, long-term contributions made to improve the sport in the state of Louisiana.

WHEREAS, Collis Benton Temple Jr. was an exceptional three-sport athlete from Kentwood, Louisiana, who averaged eighteen points and twenty rebounds per game in high school, and was the first African-American to play LSU Men’s Varsity Basketball; and

WHEREAS, his senior year at LSU was his best scoring season ever, averaging fifteen points and 10.5 rebounds per game and earning All-Southeastern Conference honors in 1973-74; he finished his collegiate career as the eighth-leading rebounder (607) in LSU history; and had also earned a bachelor of science degree in education; and

WHEREAS, for over forty years Collis Temple Jr. has amassed a substantial legacy of tutoring and inspiring young men to pursue basketball, a sport he treasures; and

WHEREAS, his life and legacy are based in the history of three generations of the Temple familywith each generation building on the intellectual and cultural foundations laid by their predecessors; and

WHEREAS, Collis Temple Jr. stood on the shoulders of giants; his parents were college graduates and civil rights activists who instilled in their children the importance of self-respect, education, and hard work; he inherited two proverbs from his father, “If a man beats you thinking, he’ll beat you living,” and “You can’t get ahead if you stay in the bed”; and

WHEREAS, in the 1950s Collis B. Temple Sr. was denied admittance to graduate studies at LSU due to his race; he sued and the settlement offered to him was receipt of federal monies to attend Michigan State University where he earned a master’s degree in education; and

WHEREAS, as a top prospect for collegiate hoops, Collis Temple Jr. visited ten schools outside of Louisiana; in an unusual twist of fate, an offer to attend LSU came from Governor John McKeithen who had essentially handpicked Collis to break the racial barrier in Tiger basketball; and

WHEREAS, Collis Sr. held no malice toward LSU and convinced young Collis that he was the right person at the right time to take this enormous step; and

WHEREAS, in the South, after the passage of the Civil Rights Act, universities were slow to recruit African-American student athletes; in 1971, when Temple broke the color barrier in a high profile sport like LSU basketball, he drew local and national attention to the university and himself; during that time, Temple experienced a scathingmixture of adversity and racial prejudice at nearly every turn; and

WHEREAS, during his first two years on the court, Temple’s talents were squandered on secondary positions while upperclassmen were given more preferential opportunities; in his junior year, Coach Dale Brown arrived and named him team captain; Temple excelled on the court and began to experience some well-deserved respect for his innate abilities; and

WHEREAS, Collis Temple Jr. was the first of 89 African-American players coached by Coach Dale Brown in his twenty-five years at LSU; from that first team, Coach Brown remembers Temple as its most prominent player; he also recognized his exceptional athletic talent and his fortitude to be a pioneer for change; and

WHEREAS, after his basketball career, Temple became a successful real estate entrepreneur and operator of twenty-two group homes for disabled and disadvantaged youth in Baton Rouge; however, basketball was always in his soul and on his mind; and

WHEREAS, he graciously declined numerous pleas from Coach Brown to become an assistant basketball coach; and

WHEREAS, he founded an Amateur Athletic Union Boys Basketball team, the Sports Academy on Laurel Street, a facility that Temple used as a training center for nurturing promising young talent; LSU’s Sweet 16 team in 2000 and the Final Four in 2006 were all players Temple had coached in the AAU; graduates from his program include Glen “Big Baby” Davis, Tasmin Mitchell, Tyrus Thomas, Jarell Martin, Jermaine Williams, Marqus Ledoux, and Brad Bridgewater, along with Temple’s three sons, Collis III, Elliot, and Garrett; and

WHEREAS, Temple has made an indelible mark on Louisiana sports history and continued the Temple legacywith all three sons attending University High School; the eldest son, Collis III, was the youngest ball boy in LSU basketball history and played for LSU from 1999 until 2003; his middle son, Elliot, played at University of Louisiana at Lafayette, and the youngest son, Garrett, was an LSU freshman starter on the 2006 LSU varsity team and now plays in the NBA for the Sacramento Kings; and

WHEREAS, Temple continues to embrace all things LSU; he actively recruits talent and several years ago he was honored by LSU Systems President John Lombardi to be selected to serve on the search committee to find a new athletic director; and

WHEREAS, Collis Temple continues to move forward; his presence changed the landscape of varsity sports and the LSU basketball program as it grew past the Maravich years; he watched two of his sons follow in his footsteps to become highly touted LSU players; he witnessed African-Americans being hired as head coaches and Eli Jones named as Dean of the College of Business where his father, Collis Sr., was refused admission; and

WHEREAS, a Chinese proverb states, “A journey of a thousand miles begins with a single step”; it took tremendous courage and tenacity for Collis Temple Jr. to step onto the basketball court in 1971; his actions precipitated a profound change in the attitudes of acceptance at LSU and other institutions of higher education throughout the South; and

WHEREAS, in the face of repeated racism, Collis Jr. was patient and persistent; he endured rejection, but he would not be ignored; and

WHEREAS, the unwavering support that Collis Temple Jr. has for LSU basketball speaks volumes about his character and leadership and the Temple legacy continues to be as powerful and influential as any family in the history of LSU sports.

THEREFORE, BE IT RESOLVED that the Legislature of Louisiana does hereby commend Collis B. Temple Jr. for his continued support and commitment to varsity basketball at Louisiana State University and does hereby acknowledge his significant, long-term contributions made to improve the sport in the state of Louisiana.

BE IT FURTHER RESOLVED that a copy of this Resolution be transmitted to Collis B. Temple Jr.

That resolution was authored by Dan Claitor, the state senator from Baton Rouge. The Senate passed it 33-0 yesterday, and the House just passed it today.

And then the coach most people believe Collis Temple forced down Joe Alleva’s throat by demanding Alleva hire him – or else – lost by 23 points to a bad Auburn team whose top four scorers are freshmen. In the Pete Maravich Assembly Center. The photo above was taken just a few minutes before tipoff.

Certainly Collis Temple has made a contribution to LSU Basketball, and some sort of recognition of same is probably overdue. But just as certainly, commending him on a day when LSU basketball has officially descended to where it was before Pete Maravich was a varsity player smacks of a rather cruel bit of irony.

The New Orleans Times-Picayne ran a column by Ron Higgins yesterday profiling Ralph Jukkola, who played on the last LSU team to lose 14 games in a row prior to this one and still goes to the games. Jukkola offered this analysis of what he sees…

“I hate to be too critical, but the (LSU) big men don’t box on rebounding, no one ever follows their shot after they shoot, no one ever helps defensively to cut off the lane on drives,” Jukkola said.

“They finally put in that weave offense, which is a joke since they weave twice out front, moving further away from the basket and never looking inside.

“They don’t have any offensive movement. (Guard) Antonio Blakeney gets hot, and then they won’t throw it to him. Part of it is on him since he just stands over the corner and waves.

“Someone has the ball, dribbles and holds it too long before passing to someone else who does the same thing. Then, they look up and see the shot clock is just about expired, so someone forces up a bad shot or poor pass.

“This season has turned into an individual fiasco.”

Judging from the longtime season ticket holders who have been Jukkola’s PMAC neighbors for years, they’ve also seen enough.

“I know most of our players this year are young and will be back,” Jukkola said, “but I’m not sure a lot of the fans will be back next year if something doesn’t change. If (athletic director Joe) Alleva keeps Johnny, they’ll lose half their fan base.

“There are people who have been going to LSU games for 30-something years that have told me this is the first time they’ve left games early.”

Claitor had to be wincing when he saw tonight’s score. It’s almost like he was honoring LSU’s current product by having his resolution enrolled today.