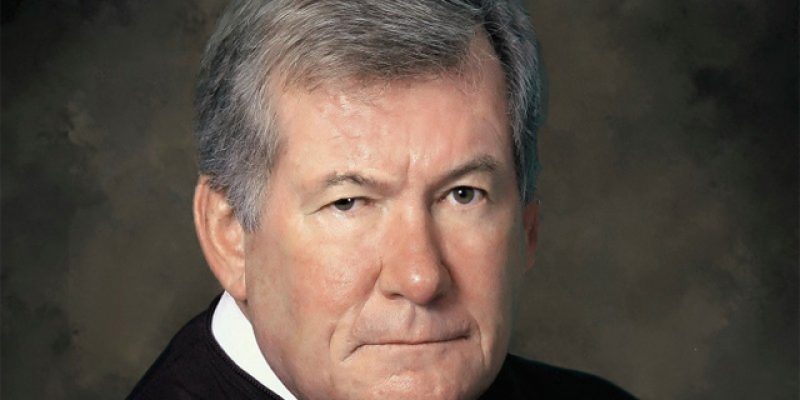 There is a lot of buzz in Baton Rouge political and legal circles this morning over what would seem like a rather petty story about someone making a terrible comment to someone else in a local restaurant on Friday. But as things play out it’s not likely to end up a petty story at all.

Friday night Baton Rouge resident, Kaneitra Johnson visited Sammy’s Grill with several classmates. While at the restaurant Johnson had a horrible incident she detailed in a telephone interview. She encountered Judge Mike Erwin who serves on the bench in the 19th JDC in East Baton Rouge.

According to Johnson there was a two hour wait for her party to be seated.  The group decided to stand at the bar during the wait.

While at the bar, Johnson says they struck up a conversation with a Lyft driver who was seated at the bar.

“He was sitting and I was standing that entire time. He stepped away to the restroom so I sat in the seat until he got back, ” said Johnson. “When he got back I asked if he wanted to have his seat back and  he said ‘No. I’m about to go any way.’ But before I leave I do need my jacket. “

Johnson says she and the driver share the seat until he leaves. “I’m halfway on the seat and the Lyft driver is on the other half of the seat. Then he asked for his jacket. All of a sudden I hear this older man behind me tell the Lyft driver, ‘You never give up your seat for a n*gger.’”

As Johnson and the driver sat side by side, the older man continues, “You should have made her get her fat n*gger a** up.”

This little nugget of social justice outrage, not unreasonable though it surely would be, appeared in a perfect place – The Rouge Collection, which is the blog of Gary Chambers, Baton Rouge’s premier race-hustler and budding public official finding his way onto various boards and commissions in the new Sharon Weston Broome administration.

We haven’t given Chambers much credit for being anything more than a two-bit bomb thrower to date, and the jury is out whether he’s anything more than that. But either Chambers, or somebody who’s running him, has figured out a longer, deeper game than just ginning up a crowd to “get” Mike Erwin for stupid and retrograde comments he may have made at Sammy’s Grill on Friday night.

By the by, this happened on Facebook earlier today… 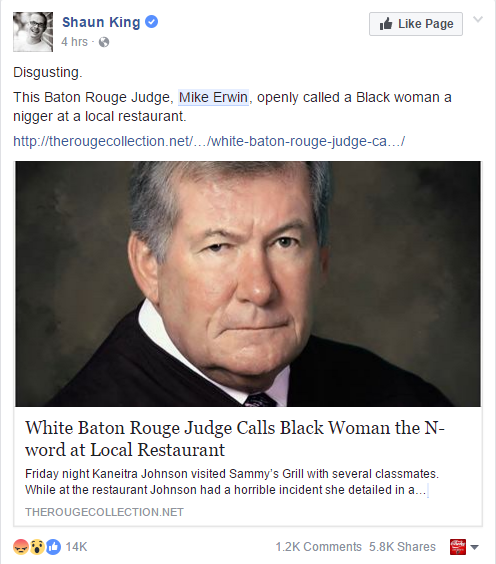 So now it’s a national phenomenon on social media thanks to Talcum X and his Facebook. And the traffic to the post on Chambers’ site actually broke his server for a while earlier this morning.

Is the story a lie? For the purposes of this post we’re going to leave that question aside. It doesn’t matter, where the long game is concerned – though there is an Advocate article to the effect that Erwin has now worn out his welcome at Sammy’s, at least for now, and on the other side of the coin it turns out that Keneitra Johnson had a probation revocation hearing two months ago at the 19th JDC, though not in front of Erwin, which might serve to impugn her credibility as a witness (and the word we’ve heard is she was put on probation because she pled guilty to stealing $75,000 from a company she worked for). Maybe all this is true, maybe it’s not. As we said, we’re going to leave it alone for our purposes here.

What does matter is that there are eight criminal court judges in the 19th Judicial District Court, and six of them are white – including Erwin, who is a Democrat typically surviving in a “swing” district thanks to black votes. Erwin won re-election over Trae Welch, the Republican member of the Baton Rouge Metro Council from Baker, 57-43 for that seat back in 2014.

And the preponderance of white judges in the 19th JDC has been a sore spot among Baton Rouge’s black political class for quite some time.

So popping Erwin as a “racist white judge” who has a long history of rough decisions affecting black defendants in his courtroom and has now shown his “true colors” is like manna from heaven. Force Erwin out and get a special election going and perhaps you now have a pickup of a judicial seat. And in the wake of the suspension of one of the two black criminal court judges at the 19th JDC, Trudy White, it’s especially a fun pastime to take Erwin down.

Erwin has longstanding personal friendships with two parishwide officials who could also be affected should this become the widespread scandal Chambers is promoting it to be. One is the District Attorney in East Baton Rouge, Hillar Moore, who like Erwin is a white Democrat. Moore has also been a target of Chambers’ – in fact, Chambers once gave away the game to an extent by demanding that East Baton Rouge have a black DA to replace him after he expressed support for a “misdemeanor jail” in town to incentivize people to pay traffic and parking tickets.

Moore called a press conference today on the question of officer-involved shootings in Baton Rouge, something that would seem out of the blue but for the impending Justice Department resolution of the Alton Sterling matter, and Moore made a point to ask everybody to settle down and let the system work.

The bigger this fracas gets, the more likely it is that Chambers and his crowd will point fingers at Moore and demand he denounce Erwin, and if he won’t do that or demurs about it then Moore could easily become a target for the race mob. And it could well be that Sid Gautreaux, the Democrat-turned-Republican sheriff in East Baton Rouge who’s also had friendly relations with Erwin, comes next.

Thus we can see the game unfolding, and how useful this petty incident can be. Flipping a judgeship and putting pressure on a couple of parish-wide law enforcement officials, with the Sterling case and the impending DOJ decision not to prosecute on it, on the basis of race could be one hell of a coup as Broome and her supporters like Chambers seek to build a political machine to control East Baton Rouge Parish.

When and if Erwin popped off to Johnson with something unacceptably insulting to say, he probably had no idea what he might have set off or the opportunity he created for folks who are awfully determined to use such incidents for political benefit.

Notice the bias in media, now WBRZ Channel 2 is crediting The Advocate for breaking the story when The Rouge Collection broke the story first. Do me a favor and don’t share their stories if they won’t credit black media. This is how they devalue us. Over 30,000 people have read this story on TheRougeCollection.com and now they want to come and not give credit where it is due. I keep telling you guys it’s real.

We could say plenty about this, but we’ll leave it alone. It’s entertaining enough as it is.

Interested in more news from Louisiana? We've got you covered! See More Louisiana News
Previous Article LSU Says The Bayou Bridge Pipeline Will Be Good For Louisiana’s Economy
Next Article VIDEO: Crazy Survival Stories In The Aftermath Of The New Orleans East Tornado