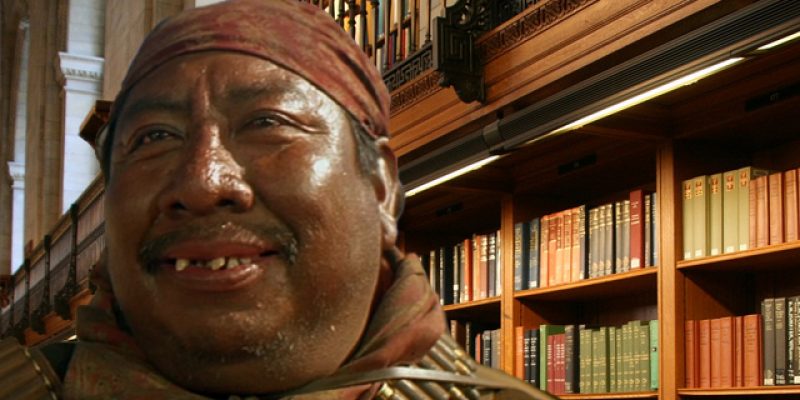 Remember Lindel Toups? If you’ve been reading this site a while, you might.

Lindel Toups was a Democrat parish councilman in Lafourche who made himself famous back in November of 2013 when, in advance of a local referendum about redirecting library funds toward a new parish jail, he spewed forth this geyser of enlightenment…

Toups served as the chair of the “New Jail Committee,” established in 2011 to help secure funding for a new facility. He said the library’s revenue is a logical choice.

“They’ve got too much money,” Toups said. “We’re giving the public the chance to raise the jail money without raising taxes. Any blind man can see that.”

Aside from his point that the system collects too much money, Toups does not philosophically agree with the library’s evolving role in the community.

“They’re teaching Mexicans how to speak English,” the council chairman said in reference to Biblioteca Hispana, a Hispanic-language segment of the Golden Meadow library branch. “Let that son of a bitch go back to Mexico. There’s just so many things they’re doing that I don’t agree with. … Them junkies and hippies and food stamps (recipients) and all, they use the library to look at drugs and food stamps (on the Internet). I see them do it.”

Well, Toups died of cancer last year, and his family is apparently pushing for Lafourche Parish to honor his memory and public service by naming a building after him.

And you’ll never guess what they’ve settled on.

Well, yes you will. You read the headline. They want to name a library after him.

No, we are not making this up. We simply don’t have that vivid or outrageous an imagination.

A Lafourche Parish councilman has asked that the Gheens library be named after a late councilman who drew national attention after controversial remarks about groups of people he said used public library services.

Councilman Daniel Lorraine, council liaison for the library board, proposed renaming the Gheens library in honor of Toups at the board’s meeting last week.

“He wasn’t really against the library,” Lorraine said in a phone interview. “He might have been against the tax, but in his heart, he was for the library. If it wasn’t for Lindel Toups, they wouldn’t have a library in Gheens. The reason I went to the library is because he stood up to get a library back there. There’s a lot of things that Lindel said that maybe didn’t make sense, but the man always had his heart in everything he did.”

Lorraine said he talked to some Gheens residents who had no problem with the renaming.

Asked about other places that could be named for Toups, such as the community center or a walking path, Lorraine said he’s set on the library.

“I want to see what they’re going to do,” he said. “If it gets shot down, then I may have to look somewhere else, but let’s see what they say.”

Councilmen Jerry Jones and Jerry Lafont, who served with Toups, said they believe renaming the library is a good idea.

“He fought hard for the Gheens community,” Jones said. “I don’t see a problem with it.”

Yes, you may slap your forehead. We did as well.

The Library Board in Lafourche says they’re going to take up this matter at their July meeting, which Lorraine, the parish councilman carrying the water for this idea, apparently isn’t very pleased with. But the parish council has the final say since it’s actually the parish, we’re told, which owns these buildings. The parish council could overturn the library board in case the latter shows a more highly-developed sense of irony.

Ah, screw it. We’re all for this idea. Just so long as it’s called La Biblioteca Toups down in Gheens.