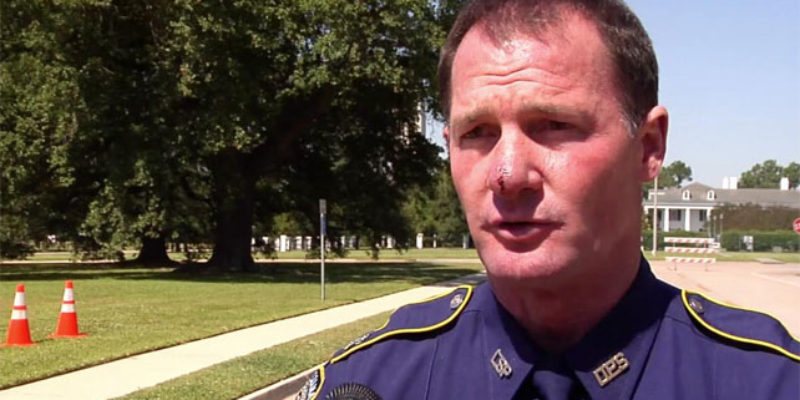 Editor’s Note: An update, with the joint statement by the governor and Edmonson, is at the bottom of this post.

You had to know this was coming.

Col. Mike Edmonson, the embattled State Police superintendent, is expected to announce his retirement from the agency Wednesday morning amid a series of investigations into questionable overtime charges and out-of-state travel involving high-ranking troopers, according to three sources with knowledge of Edmonson’s intentions.

The expected announcement marks a stunning about-face for the state’s longest-serving State Police head, who resisted outside calls for his resignation and, as recently as last week, said he had no intention of turning in his badge after nine years at the helm. While Edwards apparently did not ask Edmonson to step down, it became increasingly clear to the superintendent that he had become an untenable distraction.

Edmonson’s retirement is not expected to take effect immediately; he intends to stay on for a time amid the search for his interim successor.

Edmonson is a guy everybody liked, especially when he had the job as the state trooper who followed Nick Saban and Les Miles around, and he was a popular choice when Gov. Bobby Jindal hired him as the superintendent in 2008. Not all of Edmonson’s actions in that job were bad.

But on the whole it’s fair to say he’s been a disaster, and when he met with current Gov. John Bel Edwards on Monday it doesn’t take a brain surgeon to figure out that the governor told Edmonson he was becoming a major liability. After all, there was the scandal surrounding the 2014 bill that boosted his retirement pay, and then in 2015 there was Troopergate, in which Edmonson engineered the supposedly non-political Louisiana State Troopers Association’s endorsement of Edwards, in no small part, word had it, because Edwards promised to keep Edmonson in his job when David Vitter wouldn’t make any such promise. Then earlier this year news broke about Edmonson’s having signed off on a wasteful road trip to San Diego on the part of several state troopers headed to an awards banquet at which Edmonson would be honored. That prompted state Rep. Blake Miguez (R-New Iberia) to write a letter to the state legislative auditor requesting a full report on all of Edmonson’s travel going back to the beginning of his time as superintendent, which could prove to yield messy results.

At some point he was going to become too hot to handle, so Edwards dropped him.

That said, Edmonson isn’t leaving right away. He’s getting to go out with some dignity. That in itself is instructive, because what it likely means is Edmonson has just as much dirt on other members of the Edwards administration as they have on him – and his exit therefore looks a lot more like a brokered settlement than a firing.

But is anybody else noticing that one by one, key members of Edwards’ inner circle are starting to drop out? Who’s next?

UPDATE: Here’s the joint statement put out by Gov. Edwards and Supt. Edmonson…

BATON ROUGE — Today, Gov. John Bel Edwards and Col. Mike Edmonson, Superintendent of the Louisiana State Police, issued the following statement announcing that Col. Edmonson would retire after 37 years of service to the state of Louisiana. Col. Edmonson’s retirement will be effective Friday, March, 24, 2017. Prior to his retirement, Gov. Edwards will name an interim Deputy Secretary of Public Safety Services and Superintendent of State Police. Gov. Edwards will then begin an aggressive search for a permanent leader for the Louisiana State Police.

“Today, after careful consideration and many discussions regarding the future of the state police, Col. Edmonson notified me of his retirement. Together, we believe this is the best approach for the department. Throughout many natural and manmade disasters, Col. Edmonson has been a steady hand and strong leader for the people of Louisiana. I, and many of the people of Louisiana, have sought Col. Edmonson’s counsel on numerous occassions, and he has provided leadership and support when we’ve needed it most. Since taking office, I have relied on the men and women of the Louisiana State Police more than I would have liked, but I am proud to say that they have some of the most skilled and dedicated individuals serving in their ranks. Much of their success is due to Col. Edmonson’s innovative thinking and concern for our state. I want to thank him for his more than three decades of service to the state of Louisiana and wish him well as he begins his retirement.”

“I have spent the better part of the last few days meeting with Governor Edwards and his staff. I have also been talking with my family and friends from around the state, many of them legislators, sheriffs, chiefs of police and business owners. The discussion has always led to the same question—what is best for my family, the Louisiana State Police and all the employees who are part of Public Safety Services? After meeting again with the Governor today, I have decided that it is in the best interests of the state that I retire from my position as Deputy Secretary of Public Safety and Superintendent of State Police. The Governor has never asked that I step down. As our discussions continued today, I have come to believe that my moving aside will permit the governor and the state to move forward.

“I thank Governor Edwards for permitting me to be a part of his team. He and I have endured more than our share of crises during his first 14 months. I have offered my advice, my counsel, my support and have always given him my utmost loyalty. In return, he has entrusted me to lead this great organization. For that I am eternally grateful.

“While I have been responsible for overseeing an agency of more than 2600 employees since 2008, it was the Louisiana State Police that gave me my first opportunity in public service more than 36 years ago. I am most proud of my tenure as Superintendent. I am an imperfect person; however, when I made decisions that later gave me pause, I strived to learn from that experience and move forward. My goal was unwavering—to always do what I thought was in the best interests of my employees and the state. My nine years as Superintendent have been humbling and gratifying. I am confident that my contributions have made a measureable and positive difference. I truly believe that Louisiana has been safe with me.

“I recognize that the Louisiana State Police is bigger than any one person. It is certainly bigger than Mike Edmonson. My desire is that making this decision will ultimately return a sense of normalcy to an agency with a very important mission and an incredibly proud history. I am certain that in his deliberations for selecting my replacement the governor will understand the importance of his decision and will make the right choice. I will support my successor in providing a smooth transition; the state deserves nothing less.

“I thank the Governor and the legislature for allowing me to lead an amazing group of men and women. I thank my friends around the state who have supported me, our agency and its personnel. I thank all the employees among the several agencies I have overseen in Public Safety who helped us achieve great things, sometimes under difficult circumstances. My greatest assets have always been my employees. Nothing has been more humbling than having observed the quality of service they provided to the citizens of our state each day with an unparalleled degree of integrity and professionalism. They, in particular, have my abiding gratitude.

“This past January 4th, 36 years ago, my father pinned the “gold boot” upon my chest as I was sworn in as a Louisiana State Trooper. Over the course of my career, my family has sacrificed more than I. They proudly accepted the price of my professional calling and never once complained of my missing presence. A retired General once told me, “It is just as difficult to defend the human spirit as it is to raise it.” I think about his words every single time I wear the uniform. I never forget and frequently remind all first responders that the badge we wear is a privilege, not a right. One that is afforded to us by the public we serve. I’ve known since childhood that God’s Plan runs perfect and that His Will be done. I am excited for what He has in store for me.”