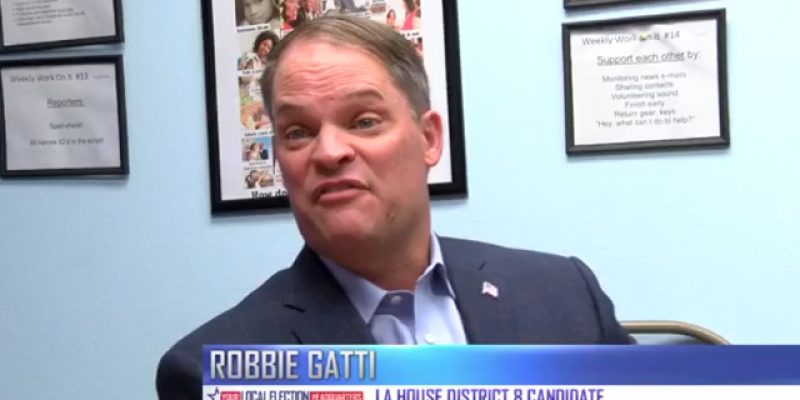 In an interview earlier this week with KTAL, the NBC station in Shreveport, state representative candidate Robbie Gatti says that since a picture of him in blackface surfaced here at The Hayride he’s received “hundreds of death threats.”

His candidacy is not without controversy. A picture surfaced of Gatti attending a church function while in ‘Blackface’. He said he went to the event dressed as Tiger Woods.

“Do you regret dressing up in ‘Blackface?’ Oh absolutely. I’ll never do it again. I’ve learned so much about that. But absolutely. They tried to paint me as a racist. I’m not a racist,” Gatti said.

Gatti said the photo was taken fifteen years ago and the fact that it came out now, is nothing more than a political attack.

“You see an attack on me personally down to the core. This has resulted in hundreds of death threats. That attack was done by my opponents. There’s no one else who could have benefited from that. I mean the cropping of that picture, there were two African American women in the picture with me,” Gatti said.

Gatti said it was wrong but hopes to focus on the issues and encourages anyone to contact him with questions.

There are major questions about whether he’s telling the truth about when the blackface picture was taken.

Gatti wasn’t asked in the interview about leasing office space to a succession of Asian massage parlors under investigation by regulatory and law enforcement agencies for performing “happy endings” sexual favors, a story which was also broken here at The Hayride.

Nor was he asked about the rather interesting collection of donors to his political campaign – a collection which puts in doubt Gatti’s claim to be a conservative.

We already know that Gatti donated office space to John Bel Edwards’ gubernatorial campaign in 2015 – ironically, in the same building (we don’t know if it was the same space, and that’s almost too good to check) the “happy endings” massage parlors occupied more recently. We also know that Gatti’s brother Ryan, who the rumor mill says is preparing a challenge to U.S. Rep. Mike Johnson, whose Louisiana House seat Robbie is attempting to fill in Saturday’s election, in next year’s congressional election, has become an Edwards ally in the Senate despite calling himself a Republican.

And now we know Edwards and his allies are trying to elect Robbie Gatti in Johnson’s old District 8 seat. From recent campaign finance disclosures out of Gatti’s campaign…

Other donors of interest: Dan Robin pere and Dan Robin fils are interesting, in that the elder Robin has been known for a long time as Louisiana Senate President and Edwards ally John Alario’s personal lobbyist – meaning that if you want to lobby Alario to do something, you hire Robin and it’ll happen. This condition was especially fascinating when it came to Robin appearing in transcripts of FBI wiretaps in the initial River Birch case in 1995 shaking down a land developer with the carrot that he could get Alario to drop a bill that would have negatively affected the developer’s land-use plans. Also, Keith Hightower, the former Democrat mayor of Shreveport. Louisiana Lobbying Solutions is the company for Democrat lobbyist Ty Brommell, while another Democrat lobbyist on the donor list is Darrell Hunt – among whose clients are Planned Parenthood and the Sierra Club. And a host of plaintiff attorneys. And then there’s longtime Bossier City mayor Lo Walker, who Hayride readers may be familiar with thanks to the CenturyLink Center debacle. Walker is another Democrat-turned-Republican.

The point being that outside of nurse practitioners and physical therapists, who shouldn’t be a surprise given that Gatti owned a physical therapy business (though the “happy endings” office leases would likely be a sore point with those donors), what you don’t see is much in the way of contributions from the business community. You see unions, lobbyists, trial lawyers, Democrat politicians – this is a donor profile that looks an awful lot like what you’d expect from a Democrat candidate. Not a Republican who’s calling himself a conservative.

Gatti looks for all the world like a fraud. Through and through. And as such, we’re going to say we don’t really believe he’s had hundreds of death threats, or much of anything else he says. Nor should the voters in District 8.

Interested in more national news? We've got you covered! See More National News
Previous Article VIDEO: Fun Night At Alex Box For The LSU-SLU Game
Next Article VIDEO: Chris Blair’s One On One Interview With Will Wade