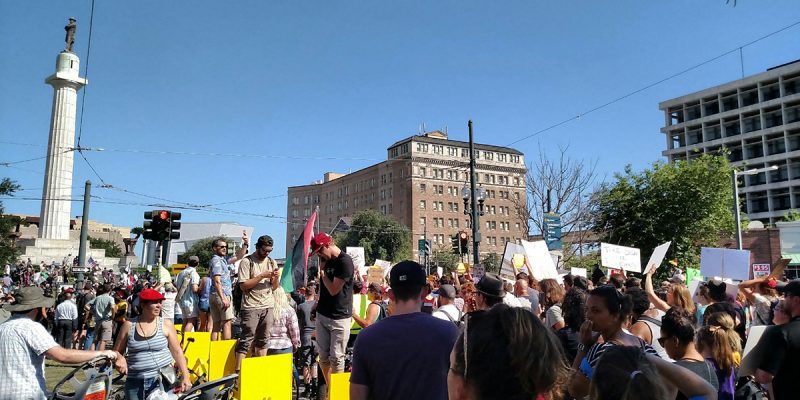 On Sunday, the 299th anniversary of the founding of New Orleans, leaders of the Take Em Down Nola anti-monument group held the “victory party” to celebrate the removal of the first of the city’s four major Civil War era memorials and to extend their campaign to other monuments unrelated to the War between the States.

Tensions had been heightened since the removal of the Battle of Liberty Place obelisk in the dead of night, utilizing masked city firemen and vehicles with identifying markings concealed, all done under the watchful riflescopes of NOPD snipers.

Take Em Down Nola’s public party would commence with a rally at Congo Square, parade through the French Quarter, pausing in front of Jackson Square to remind everyone that the iconic equestrian statue of Andrew Jackson, the Hero of New Orleans, would be in their crosshairs once the CSA monuments have been uprooted and then proceeding up to Lee Circle.

Their poster could have won first prize at a socialist realism art contest as it featured a fist (a typical symbol of Marxists) clinching the Lee Circle pillar as if it were a hammer.

The event was billed to start at 1:30 PM but it would not be until 4:00 PM when the bowdlerizers, escorted by police (the irony!), would make it over to Lee Circle, a walk that would take no more than 40 minutes if they were cartwheeling along the route.

But for the 100 or so watching on the periphery, another group was on hand to provide the opening act.

Standing atop the mound at Lee Circle and occupying the segment that faced the downtown side of St. Charles Avenue was an odd collection of men who opposed the removal of the statue of General Robert E. Lee.  While united in that particular position, each group largely stayed within their own pocket.

One group resembled the thumpers who battled the so-called AntiFa in Berkeley.  They were clad in paramilitary uniforms and wearing body armor and helmets.  They had a commander and stood as a unit.

Then there were the southern nationalists, wearing t-shirts and blue jeans flying large white flags with a black “x” (saltire- a vexillological term) that represented their neo-Confederate cause of establishing a southern nation.

And then there were the unaffiliated people who wore camo and waved a combination of US, CSA battle flags, Trump, and the “Three Percenter” flags.  One of these was a guy who drove in from California to take part in the defense of history.  He was attired in the breastplate of a medieval knight, though he had an issue with the southern nationalist and ended up getting in a fist fight with one of them, which left him with a bloody lip.

In front of the onlookers were a group of gutterpunks hurling insults and occasionally breaking the police line to snatch the flags and physically attack the “defenders”.

Beyond that the only thing going on was a fellow who pedaled his large bicycle across the street, wearing fake horns on his head, attempting to look like Satan though resembling more hippie version of Maleficient.  His contribution to the event was his boom box as he seemed intent on dejaying the protest while dancing in the street.  He seemed to be the only person truly enjoying himself as he blasted calliope renditions of the Beatles and other music intermixed with Frank Sinatra tunes.

No I am not making any of this up.

After waiting two hours, a food truck pulled up heralding the approach of the tardy Take ‘Em Downers.  The protest was snaking its way from Loyola Avenue to Howard Avenue, approaching Lee Circle from a different direction.

I walked over to see what would happen when the two groups would literally collide.  While passing the Greater New Orleans Foundation building, I noticed a small pile of miniature US flags on the sidewalk covered in some kind of liquid- urine or lighter fluid with some of the gutter punks joking that it’s their duty to “light up” these soiled flags.

The chanting crowd made their way on top the circle, waving their banners, placards, signs- everything but American flags (those on the other side of the barricades had at least a half dozen).

The Take Em Down Nola crowd proved to be equally as extreme.  These were not the regular citizens but the professional activist fringe- LGBTQ militants, racialists, the resist crowd, Marxists, out of town provocateurs (with one guy waving a giant sign showing South African students yanking down a statue of Cecil Rhodes), white guys waving “Black Lives Matter” posters, anti-capitalists, and other assorted sore losers from the 2016 election.

Basically the same exact people who took part in all of the other social justice protests held in New Orleans in the past six months (March for Women, Pro-Immigration, anti-Trump, Justice for Alton Sterling, etc.)

Oh, with two exceptions- the anti-monuments protestors were predominantly white and young.  In fact I’d said no less than 80% white.  Many were college students posing for selfies (my favorite was the pair wearing their “resist” sundresses while holding cocktails- such a delightful afternoon!).

Recognizing that the assembled mass was less diverse than any given country club’s membership roster, the coordinators of the protest went through great care to ensure that African-Americans were positioned at the front of the march to give the appearance that this movement was truly a groundswell emanating from the city’s majority.

No blue smoke and mirrors could conceal the reality that this was essentially a march “for black people, by white people”.

Also there weren’t as many as there were for the Alton Sterling march, which literally spilled out into the Lee Circle traffic.  This crowd had fewer than 1000.

Though this group hid the Che shirts and the sickle and hammer banners, a few got their contempt for the US out there in more subtle ways.  A tandem of girls sporting Venezuela hats held a sign mocking how America wasn’t great.

After less than thirty minutes of hurling of profanities, blasphemies, and unkind speculations about familial lineage, the front vanguard of Take Em Down Nola begin to assemble to retire.

The elderly African-American ladies carrying the red “Power to the People” banner took up position and the “chantress” began shouting “This is what democracy looks like!”.

As the dozen black protest leaders stood there alone in the sun, it dawned on them that the group wasn’t moving.  Their white people were having too much fun screaming at the other white people.

The woman with the bull horn pleaded with her fellow activists to fall into line, but nobody paid any attention.  They were being ignored.  Sad faces showed as it occurred to the protest leaders that this wasn’t their own protest.  Lead rabble rouser Malcolm Suber began to pace around trying to get people to leave the circle but the shouting matches continued.  Nobody was rejoining the group and even more embarrassing, protestors were slinking off from the rally, reducing their numbers.

The Confederate flag wavers remained throughout and once the protestors had left, the leader of one of the groups got on a megaphone, mocked the Take Em Down folks and closed with a reminder of their own fringe status, shouting out “Hail Victory”, the English translation of the German Nazi salute, Sieg Heil.

The protest at Lee Circle was a battle between extremists that fortunately did not escalate into a full blown riot or violent rampage.  The police who literally put themselves between the Take ‘Em Down Nola people and the confederate flaggers deserve credit and recognition for handling this peculiar situation.

New Orleans is a second-line city, it’s not a protest city.  I suspect many of the participants on both sides of the barricades hailed from out of town, including the college students who comprised a big portion of the Take Em Down Nola contingent.

There are two big takeaways from Sunday.

First there is not a genuine groundswell of local support to remove the statutes.  While they might not be popular with everyone in the city and a bare majority would like to see them removed, there is clearly not a broad consensus on the matter nor do people care enough about it to take to the streets, even in close to ideal weather.

The threshold to remove a monument or a memorial ought to be far greater than to erect a new one.  There is no widespread outcry or push by community leaders to accomplish this, a point of great frustration as admitted by Mayor Mitch Landrieu.

Secondly, those who faced off at Lee Circle do not represent the mainstream of any political group or community within New Orleans.  If they did, you would have seen politicians linking arms at the vanguard of the march.  Instead the only politician who was around was a guy who got less than 2% for city council – that’s the hapless Suber, the Take Em Down Nola leader.  Standing on opposite sides of the mound were political radicals and racialists, Euro and African.

These aren’t the people who should be faces of a high profile public debate and it is not good for New Orleans’ image.

These are both radical and combustible elements and they are here in New Orleans during one of the biggest tourism periods in the calendar because of an irrational crusade against statues when the city has many more pressing issues, including matters of life and death.

While hurricanes are a natural occurrence, Katrina has been called a “man-made disaster” because of bad decisions made by engineers and politicians that led to the New Orleans area being made more susceptible to catastrophic flooding.

What New Orleans is experiencing right now is a politician made embarrassment.