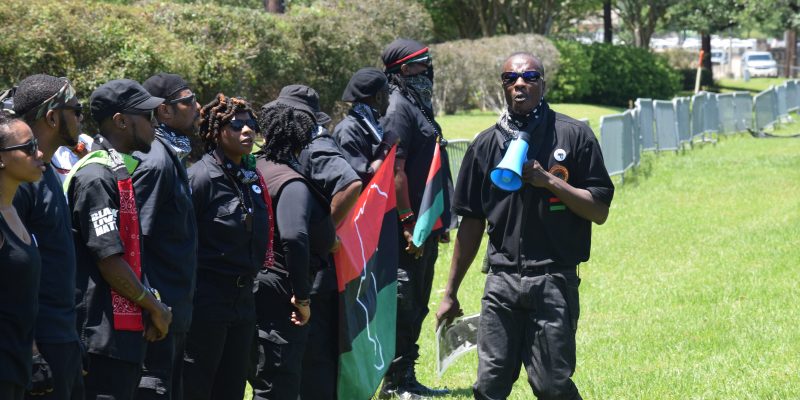 The New Black Panther Party’s protest against the Baton Rouge Police Department over the Alton Sterling shooting last year and the Justice Department’s decision not to charge the BRPD officers involved was pretty much a dud, with only about 15 protesters lining up in front of BRPD headquarters on Airline Highway Saturday afternoon.

Some local news outlets were calling this thing a march, but all it amounted to was the group walking across the street to BRPD headquarters, stationing themselves in front of the building and repeatedly calling cops pigs. 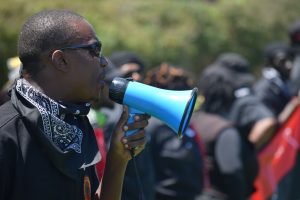 While that was going on, several of the protesters were complaining about a group of people they were calling white supremacists who were watching the thing from a distance. Those were members of the Oath Keepers group; whether they’re actual white supremacists or not is debatable.

Funnily enough, while the Black Panthers were repeatedly insulting the police, BRPD officers quickly and quietly detained one of the “white supremacist” crowd after patting him down and talking to him for a while. A few of the protesters who watched the exchange ended up celebrating when the guy was put in the back of the police car. The irony seemed lost on them.

And that was pretty much it. The main member of the New Black Panther Party who was speaking on a megaphone (which he wasn’t supposed to do, based on the permit the protesters were granted by the city) was openly and brazenly calling for violence against the police. When a female police officer began taking pictures behind the barricade set up between the PD and protesters, the guy called her a pig b**** and a coward, but she was gone by then.

The real winner was the Baton Rouge Police Department, who managed to stay out sight until they were needed to ensure the safety of the event. Kudos to the boys in blue for a level of professionalism and decorum the protesters certainly didn’t match.

Interested in more news from Louisiana? We've got you covered! See More Louisiana News
Previous Article Liberals Are Super Upset About the FCC Going After Stephen Colbert
Next Article BAYHAM: Benny Hill At The Barricades In New Orleans As Take Em Down Nola Meets The Flaggers