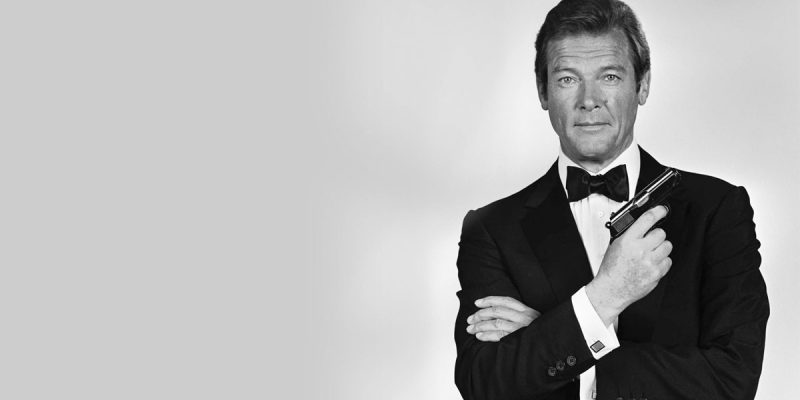 I am going to make two controversial admissions. First, I like my steaks cooked medium well.  This wasn’t controversial until word got out that Donald Trump likes his steaks well done leading to the social internet labeling anyone who dares have their sirloin cooked more than medium a culinary philistine. And second, Roger Moore was my favorite actor to play James Bond.

This is heresy to those who maintain there is one and only one English secret agent.  You know, the one from Scotland.

But it was Moore’s 007 that got me hooked on the series as a kid looking to see what else there was cinematically after Star Wars.  They also introduced me to the politics of the Cold War as the Soviets assumed more of a presence in Bond movies produced in the post-détente world.

For Your Eyes Only was the first Bond movie I ever saw in the theater and thereafter I made a point of lingering to the end of the credits to see those magical words “James Bond Will Return In (fill in the blank).”

Moore was clever, charming, and witty and made the role his own, attracting new fans to the successful film franchise who wanted something more than fight scenes and bedding women with suggestive names.

As a friend of mine who is firmly planted in the Connery camp pointed out, Moore should not be blamed for the series’ transition away from its original hard edge to a relatively lighthearted style as the Bond films had actually changed while the Scotsman was swigging dry martinis.

Would the campy Diamonds Are Forever have been any different with Moore in the lead role?

Moore’s Bond was the man for the new cultural era, less brooding and more debonair and sometimes comedic, to the chagrin of Connery Bond fans.

However when called to do so, Moore could be deadly serious.

In what many consider to be his best Bond movie, The Spy Who Loved Me, a Soviet agent played by Barbara Bach playfully recited Bond’s dossier and upon mentioning his marriage Moore visibly winced, a deft reference to his wife’s murder in a previous movie. It was a masterful gesture to character continuity.

It wasn’t all smiles and laughs as Moore’s Bond could be cold blooded, kicking a vehicle holding an adversary off a cliff, hurling a knife with deadly accuracy at an enemy hitman who had killed fellow MI6 agent 009, knocking a thug clinging for his life off the top of a building after the hitman had given up the information Bond wanted, and dropping a wheelchair-bound Blofeld down a smokestack.

Moore also had great rapport with the supporting characters, both friend and adversary.

This was especially true with Desmond Llewelyn’s Q.

The bantering between the hyper-serious gadget engineer and the secret agent provided some of the most humorous moments in the series.  Usually the grumpy Q would be on the short end of the exchanges but there was one scene where he got the better.

In For Your Eyes Only, Moore went to a Greek Orthodox church for a message pick up at a confessional.  Moore entered the booth and said “Forgive me father for I have sinned” only to be greeted by Q clothed in priest vestments and sporting a fake beard on the other side of the screen, replying “That’s putting it mildly, 007.”

Moore was also fortunate to have played opposite of villains portrayed by very good actors, including Christopher Walken, Christopher Lee, and Julian Glover (who has the distinction of being a bad guy in the Bond, Star Wars, and Indiana Jones movies).

While Sean Connery played a more serious Bond, Moore fully embraced the role, defended the character from the forces of political correctness, and didn’t mind having 007 define his acting career even though he did not portray the definitive Bond.

Moore never ran away from the character and he didn’t play ego or contract games with the franchise, as other actors did, holding out for more money or lamenting being typecast as one of the greatest movie characters of all time.

Even if many Bond fans did not care for his portrayal of 007, they should recognize that Moore kept the franchise going through two decades and never resented the role.

Interested in more national news? We've got you covered! See More National News
Previous Article HOLTON: The West Has Failed to Defend Its Most Innocent And Precious
Next Article BATISTE: Jarvis DeBerry Is Going To End Up Costing The Times-Picayune Lots Of Money