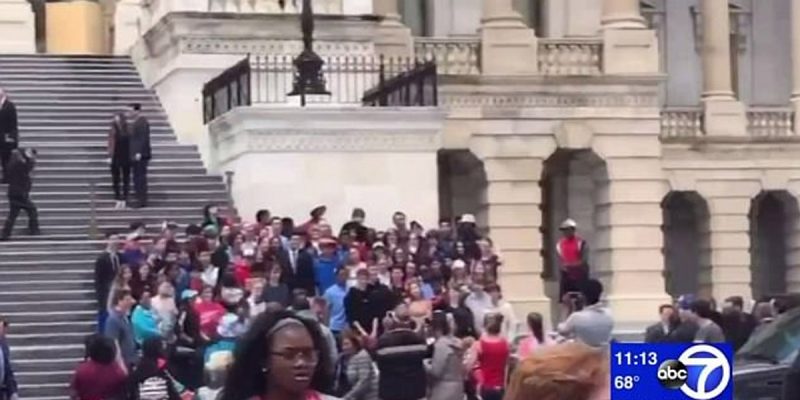 Facebook’s trending box announced that the latest news of the “resistance” as a group of 8th graders from South Orange Middle School in New Jersey declined to be a part of a group photo with US House Speaker Paul Ryan.

These teenagers were toasted by the media, both the deftly partisan established and the more overtly partisan branches of the leftist news leviathan. But at the end of the day, they got to become famous not because they were principled but were rude.

The Washington Post reported that one of the defiant students’ mother is employed in the school district and that the South Orange leading contender for “mother of the year” gushed about her kid’s Marius moment on social media.

And truth be told I wouldn’t be shocked if it turns out that the kids were coached into doing this considering the hold radical teacher unions have on public education in New Jersey.

Times and it seems values have changed in the 25 years since my maiden voyage to the nation’s capital a part of a Close Up visit.

As part of the itinerary we were told to wear coat and tie (suit preferable) to visit with a member of our state delegation in Congress. I got sent to John Breaux’s office.

I don’t know why I was assigned the Cajun Democrat’s office as other members from my group got to meet with Republican US Representative Bob Livingston, which would have been my preferred visit, but I went anyway, briefly met Breaux, smiled for the camera, and was handed a congressional calendar as a souvenir.

The visit was pleasant, the senator was cordial, and I was polite. Ironically enough ten months later I campaigned and voted for one of his opponents.

That said I really liked the photograph taken on an old Kodak 110 (no, I did not get him on a Kodak disc) that was unfortunately lost in Hurricane Katrina.

And even as an insufferable seventeen-year-old I appreciated that a US Senator would take a few seconds out of his day to humor a high school student.

There were no lectures from me about his opposition to Robert Bork or the three or four other things he didn’t vote with the GOP on.
Unlike the proud mama in Jersey, mine would have been furious to have learned that her son caused a scene in Washington and I would have sought political asylum at the Mozambique embassy before risking a return home.

Jump to 2006. There’s a committee hearing in the State Senate about a bill Jesse Jackson was supporting. I signed up to testify against the legislation offering counterpoints to the former Democratic presidential candidate’s arguments.

After exiting the room, Jackson approached me not to continue the debate in the hallway but to shake hands. I greatly respected that gesture.
Jump another ten years to the US Capitol.

Harlem congressman Charlie Rangell was strolling through the corridor when he saw a few of us tourists loitering about and he proceeded to introduce himself and asked us where was home. When he got to me and I said Louisiana, he theatrically reached behind himself to ensure he still had his wallet in his backpocket.

I didn’t retort by whipping out a smartphone, smashing the video app, and start rattling off loaded questions about his personal financial scandals. I did what a normal person would do: I laughed because it was funny and I appreciated seeing a senior member of Congress laid back enough to joke around with a stranger.

Yes, I concede President Trump can be rough, though I think he has toned down greatly since the campaign and has continued to grow into the high office he holds. The opposition or whatever grandiose Patti Hearst sounding militia sobriquet they now call their collective, have kept spiraling out of the realms of civility and reality.

Applauding the disrespect shown by the New Jersey eighth graders sends the wrong message to obviously impressionable children, lessons that could cost them dearly later on in life.

The left has devolved from giving their presidential nomination to a man who recited a good speech to lionizing the obnoxious behavior of children.

If these kids won’t be polite to the Speaker of the House, how can you expect them to be courteous to those who don’t high stations of office and when the consequences for demonstrating poor conduct could be far greater?