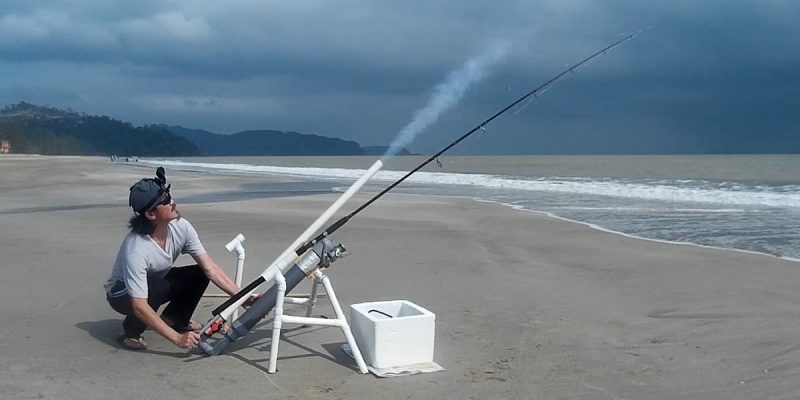 This is from South Carolina, where they have rednecks rather than good coonasses. An’ I gotta give the rednecks some credit – freezin’ a 10-inch mullet and some fish chum into a popsicle that fits in a potato gun an’ blastin’ it off into the ocean 300 yards for purposes of better beach fishing is quality.

A good coonass would have a better idea, mind you. First off, coonasses don’t do much beach fishing, on account of there ain’t any beaches where most coonasses live. There’s Grand Isle, I suppose, and Holly Beach for the western coonasses, but for the most part they got a lot more beaches in South Carolina for the rednecks than we have here in Coonass Land.

But second, if there were coonasses out beach fishing, an’ they weren’t just playin’ around like bein’ on vacation (you don’t get real serious about beach fishing if you’re on vacation; you just cast your line and what you catch, you catch), you could bet they’d come up with somethin’ other than a potato gun.

Like a drone, for example. Boudreaux and Thibodeaux would set up a drone to carry that bait out in the water and then drop it in. No muss, no fuss, an’ the only limit is the length of the line.

Still, this is pretty damn good work. An’ check out all the stuff they catch! Sharks, rays, you name it.

One thing if you’re gonna use one of these, an’ it’s a pretty important tip. Which is you had better make damn sure you leave the bail open on your reel before you launch that bait.

Because otherwise, the video of your rod flyin’ off into the ocean will make for even better viewin’ than the one of all the sharks an’ rays an’ monster grouper an’ tarpon and whatever else you might catch if you do it right.