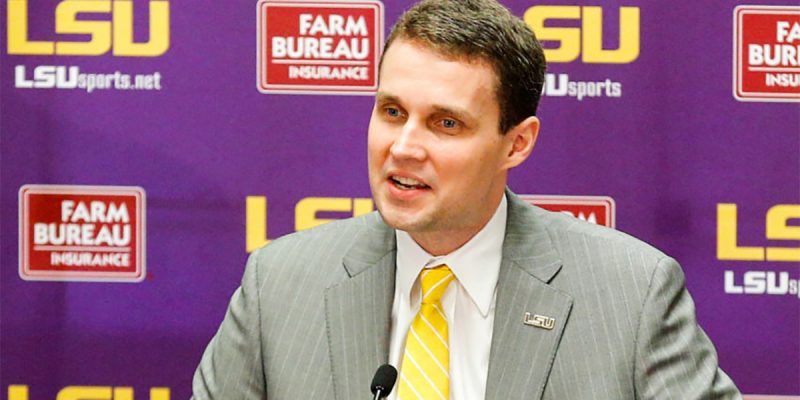 We haven’t talked much about LSU’s new basketball coach and his exploits since taking over the program at the end of March, but since Will Wade made a little bit of news today we thought we’d revisit him a bit.

The news was that LSU took a senior transfer from North Texas named Jeremy Combs who could be a factor on the Tiger team this winter.

Combs will arrive as a transfer from North Texas, where he played three seasons under former UNT coach Tony Benford, who LSU recently hired as an assistant to head coach Will Wade.

Combs will have one year of playing eligibility and can play the 2017-18 season as a graduate transfer. The school announced the signing Monday.

The Dallas, Texas, native last season missed 16 games due to injury, including the final 12 games of the season. He averaged 10.2 points and 6.4 rebounds.

Combs as a sophomore earned second-team all-Conference USA honors with team highs in points (14.9) and rebounds (10.5). He also was runner-up for C-USA freshman of the year with 10 points and 6.7 rebounds per game.

“We are excited that Jeremy Combs will be joining us following his graduation from North Texas,” Wade said. “His ability to score inside and to 15 feet along with his aggressiveness on the boards will be an asset for us next season.”

Combs is a little on the small side for an SEC post player. He’s 6-7 and 215 pounds. LSU has certainly made do with 6-7 players at power forward in the past, though. Tasmin Mitchell was listed at 6-7. Brandon Bass was listed at 6-8, though in actuality he was more like 6-6. Jordan Mickey was 6-7 or so, and Combs’ game is similar to Mickey’s.

That’s a 39.5″ vertical leap on a 6-7 kid. You can generally get a lot of rebounds if you’re 6-7 and can jump more or less 40 inches in the air. Which Combs has done; a career rebounding average of 8.2 boards a game is substantial.

He’s also a dunker. There is this…

What you don’t get much of from Combs is a perimeter game, though – which accounts for the fact he’s been a good Conference USA player but not a star. In his career Combs has only taken two three point shots and missed both of them, and he’s only a little better than that at the foul line – for his career he’s a lousy .536. But his field goal percentage is pretty darned good. Combs shot .561 from the floor as a freshman, .603 last year and .563 this past season. Which tells you he lives around the basket and plays a little bigger than 6-7. The only complaint one might have is he’s not all that much of a shot blocker; he only averages 0.7 blocks a game for his career.

The issue with Combs was a bad ankle that he picked up at the end of his sophomore season, had surgery on in the summer after that year and then it never did heal properly. Benford shut him down in mid-January and he had the ankle operated on again. He’s supposedly healthy again now.

Combs isn’t the best of the newcomers Wade has added since he came aboard at LSU. His other two signees are a bit more heralded. Wade pulled in Mayan Kiir, a 6-9, 225-pound post player from Florida who he’d signed at VCU, shortly after the spring singing period began, and he also signed 6-4 junior-college guard Daryl Edwards from Northwest Florida State College a couple of weeks ago. Kiir, a native of South Sudan, is rated as a Top 100 recruit by most services; he’s a premier rebounder and defender in the lane whose offensive game needs some work. Edwards, meanwhile, was rated the No. 23 junior-college prospect in the nation after helping to lead Northwest Florida to the NJCAA Final Four this year. He averaged 13.6 points, 3.1 rebounds, 3.9 assists and 1.4 steals a game, shooting .489 from the floor, .743 at the foul line and .466 from the three point line. Edwards played mostly point guard as a freshman at Northwest Florida, and then played off the ball this year. He can do either at LSU.

Add to those three players Brandon Rachal and Galen Alexander, a pair of 6-6 wing players previous coach Johnny Jones recruited, both of whom are rated somewhere between 100 and 120 in the country by most services, and you have a reasonably good recruiting class.

Of course, the roster Wade is bringing back for next year is nothing much to write home about – and given the decision by Antonio Blakeney to turn pro even though he’s unlikely to be selected in the NBA Draft that roster looks even worse. The only returnee who has any particular prospect of becoming a professional basketball player is 6-10 center Duop Reath, who averaged 12 points and 6.2 rebounds per game last season. Reath might team with Combs and Kiir for a reasonably decent post rotation; if seniors Aaron Epps or Elbert Robertson could improve enough to contribute a little it could make a nice difference this winter.

Guard play will be interesting. Edwards’ ability to replace Blakeney not so much as a scorer but as a catalyst for the offense could be crucial to putting a competitive product on the floor; if he’s not a difference-maker LSU could have a lot of trouble. Wade likes senior Branden Jenkins, who tried to play on a knee which wasn’t completely healed from offseason surgery this past year. The results for Jenkins were rotten; he only averaged 1.3 points per game and shot just .200 from the floor last season. Either he makes a colossal leap this season as a healthy player or LSU will be well short of quality guards. Fellow senior Jalyn Patterson is hot and cold; sometimes he looks like a quality contributor and other times he’s completely lost. Brandon Sampson has the athleticism to be a difference-maker on the wing and his numbers last year (11.6 ppg, 3.1 rpg, .475 FG%) were pretty good, but Sampson plays zero defense and his shot selection is often mind-boggling. He’ll either buy into Wade’s system and emerge as a quality player or he’ll end up a cancer in the locker room.

And then there’s sophomore-to-be Kieran Hayward, who looks the part of an athletic three-point bomber but did scant little of it as a freshman (1.2 ppg, .222 FG%), along with sophomore point guard Skylar Mays (8.3 ppg, 3.6 apg), who has some ability but isn’t much of a shooter (.411 FG%, which isn’t great, and .328 3PT%, which isn’t great either) and needs to get a lot quicker if he’s going to handle the point in the SEC. Wade reportedly really likes Rachal; don’t be surprised if he doesn’t make up a three-guard lineup with Edwards and Sampson, with Mays and Jenkins as the leading guards off the bench.

That leaves Wayde Sims, who had a decently-productive freshman year (6.5 ppg, 3.8 rpg, .503 FG%), but might struggle to find a role in Wade’s system unless he commits to becoming a much, much better defensive player. Sims will be in a major competition with Alexander, who’s coming off December knee surgery, and the wing guards (Rachal, Sampson, Hayward) for playing time at small forward.

Also, this roster is at 14 players currently. Somebody is leaving. Which is a good thing; one maddening characteristic about LSU basketball over the past two decades is the refusal of its coaches to oversign and put pressure on returning players to keep their grades up, not slack off in offseason conditioning, maintain some off-court discipline and so forth. Now there’s a credible threat to the returning players that one of them will be sent packing; that lack of safety is a good motivator for a program which has lacked motivation for a long time.

Is Wade done replacing returnees? That’s hard to say. There are a few more senior transfers of note still available, though one who had been mentioned with respect to LSU, Akron guard Antino Jackson, committed to New Mexico last week. As for freshmen and JC players, the pickings are getting pretty slim; only a scant few of the Top 200 recruits in the country are still available and at present LSU isn’t on the short list for any. One would imagine if Wade is going to send any returning players packing to bring in someone else it will probably either be a senior transfer or perhaps a traditional college transfer player who happens to be really, really good and gives LSU a start on the 2018 recruiting class.

EDIT: LSU has a very, very good player coming in for a visit in two weeks…

Wright State transfer Mark Alstork (@Mark_Alstork) has visits sets for Georgetown on May 8th & LSU on May 15th. Also talking to Louisville.

If Wade can pull the 6-5 Alstork as a senior transfer he really will have a replacement for Blakeney. Alstork put up some considerable numbers at Wright State last year, averaging 19.0 ppg, 4.7 rpg and 3.5 apg, while posting some solid shooting numbers (.400 FG%, which isn’t great, but .387 3PT%, which is, and .846 FT%, which is terrific) on a decent 20-12 team this past year. Here’s a highlight film on him…

That recruiting class appears to be Wade’s main focus at present, as the coach and his staff are currently burning up the AAU tournament circuit as they attempt to wedge themselves into the conversation for some of the top talent available to sign in November for the 2018-19 season. 247 Sports lists LSU as “Warm” for three recruits in the national Top 20 for next year’s recruiting class: guard Jevonte Smart (6-5) of Scotlandville High School in Baton Rouge, forward Emmitt Williams (6-8) of IMG Academy in Bradenton, Florida and forward Khavon Moore (6-8) of Westside High School in Macon, Georgia. Pulling any of the three would be huge for LSU. Wade should have no less than six scholarships to fill starting in November, and that class will likely determine how fast he can bring the program back to national relevance.

But with Kiir, Edwards and Combs Wade has at least made a start of restocking the roster with competitive players. LSU is, on the whole, a better team now than it was when he took the job. Now his challenge is to improve what Jones left him enough to lift the team’s record out of the doldrums this coming season.