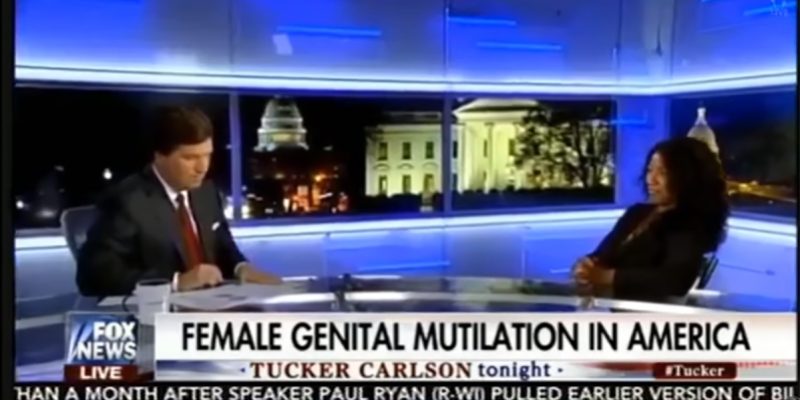 …it might be the most surreal thing you’ll see for a while. “Female circumcision” is a euphemistic way to say Female Genital Mutilation, which is the barbaric Muslim practice in which baby girls have parts of their sex organs chopped off to stunt their ability to enjoy sex when they get older.

It is the sign of a morally deficient culture that such a practice would be widespread, and a harbinger of societal decline that there are now Muslims calling themselves doctors who are conducting this practice in America – thank God they’re being arrested for it, and hopefully they’ll serve lengthy sentences for it.

So Fox News found someone, a woman named Fuambai Amadu, who would actually defend this disgusting, atrocious custom, and Tucker Carlson found himself so freaked out by it that he simply couldn’t bring himself to show the outrage one would hope for from an accomplished defender of Western civilization. He did have an excellent moment during the conversation you should look for.

The real highlight comes at the end when Carlson says “I don’t want it in my country.” Spot on.

But did you catch the part about four and a half minutes in where Carlson references burning women on the funeral pyre? That’s an important reference, and it should be explained to those of our readers who aren’t familiar with it.

Charles James Napier was the British Army commander in India in the mid 19th century, and he was a military commander and administrator of legendary quality. Napier also was a forceful practitioner of Western civilization, and after capturing the province of Sindh in 1849, he was informed of an impending example of another barbaric practice – that of the Sati, a Hindu ritual wherein widows were burned on the funeral pyre.

Napier wasn’t one of your modern politically correct sensitive types. He told the locals he wouldn’t tolerate Sati on his watch. And he didn’t back down. When they objected to his colonialist white-privileged insensitivity, here’s what he told them…

“Be it so. This burning of widows is your custom; prepare the funeral pile. But my nation has also a custom. When men burn women alive we hang them, and confiscate all their property. My carpenters shall therefore erect gibbets on which to hang all concerned when the widow is consumed. Let us all act according to national customs.”

And that was the end of the Sati.

We need a lot more Charles James Napiers in this country. They’d do wonders to give us a lot less importation of so horrendous a custom from an inferior and barbaric culture.

Interested in more national news? We've got you covered! See More National News
Previous Article AUDIO: Mike Johnson Doesn’t Like The Just-Passed Budget Any More Than You Do
Next Article Dorks Across The World Have Turned Today Into A Star Wars Holiday, And Here’s Our Contribution…