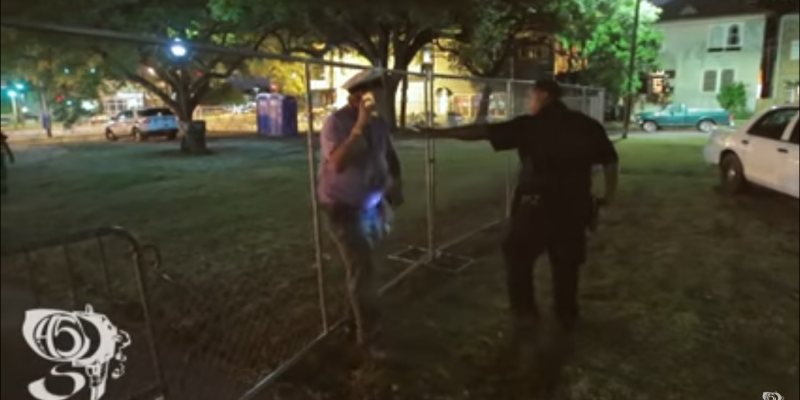 Frank Scurlock, who is running for mayor of New Orleans, was roughed up and arrested while trying to ask a cop a question. Scurlock was on the phone with a 911 operator while the incident was ongoing.

When he doesn’t get an answer, the video shows, Scurlock begins following an officer who is leaving the area behind the barricade.

The officer tells Scurlock several times, “Don’t walk up on me.” When Scurlock continues to follow him, the officer shoves him into a fence. More officers then swarm out from behind the barricade and arrest Scurlock.

When Scurlock asks what he did wrong, another officer says, “When an officer tells you to back off, he feels threatened. Do not walk up on him.”

“My civil rights, liberty and everything granted to me by the Constitution of the United States of America was taken away from me by the New Orleans Police Department,” Scurlock said in an interview Monday.

He said he was detained in handcuffs for several hours and his three phones were broken when officers frisked him. He was booked on a municipal count of obstructing a public place.

If this police officer was scared of a goofy white guy with a phone in his hand walking up behind him, he shouldn’t be on the streets with a gun and a badge. There was no need for this officer to rough up Scurlock and arrest him.

It is unacceptable for the police to rough up anyone like this, regardless of where they stand on the monuments. But we wonder if the usual anti-police brutality voices are going to speak up on this case. After all, Scurlock is a monument supporter and most of them support taking these monuments down.

This violence against a monument supporter should be condemned by everyone. Hopefully, this officer is disciplined.

Interested in more news from Louisiana? We've got you covered! See More Louisiana News
Previous Article Tasha Clark Amar Is Doing More To Create St. George Than Anyone Else
Next Article The Alton Sterling Fan Club Is Now Threatening To “Shut Down” The Baton Rouge Metro Council