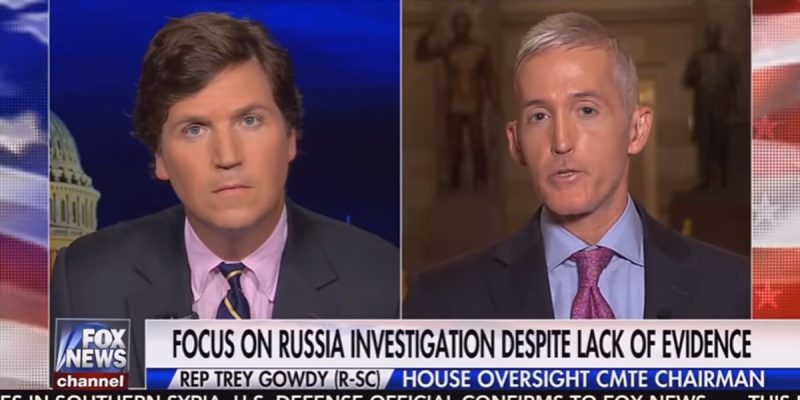 Rep. Trey Gowdy, the South Carolina Republican who is taking over for the departing Rep. Jason Chaffetz as chair of the House Oversight and Governmental Affairs committee and is therefore going to run that committee’s investigations into the various matters involving potential bad deeds by the Russians, the Trump campaign, the Obama administration and others which have dominated newspaper headlines and cable news babblings for six months running, told Tucker Carlson Tuesday that the hysteria over allegations of collusion between Trump and the Russians is not a congressionally-generated phenomenon.

“Tucker, the hyper focus on collusion is not Congress’ fault — I would say folks in your line of work have been focused on collusion much more than certainly Republican members of the House,” he said during a segment of Carlson’s show.

During that appearance, Gowdy said the “collusion” issue is only a small part of a larger ecosystem of items the committee is reviewing. There are actually four areas of interest being examined.

One is the extent of Russian meddling in the 2016 presidential election. The collusion issue is only a small, and not particularly significant, subset of those inquiries despite all the partisan media attention paid to it. Another would be the U.S. response to that interference, which Gowdy said involves the Obama administration and has nothing to do with Trump. A third would be leaks coming out of the government, and that’s probably going to end up as the most productive and dramatic area of inquiry, and finally the committee will be looking into the issue of unmasking Americans appearing in NSA intercepts.

Gowdy says he hopes – he said “in a perfect world” he’d accomplish it – to have the entire broader inquiry complete by Labor Day. That mission is complicated to an extent by the necessity, for optics’ sake if nothing else, of having every possible witness interviewed – Gowdy noted that whatever witness doesn’t testify to the committee will be the one critics complain was the one with all the real information.