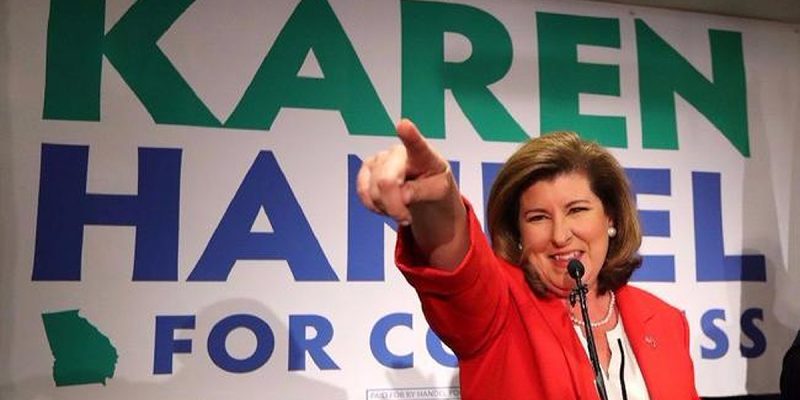 Last night marked the conclusion of the most expensive Congressional race in American history, as some $40 million was spent deciding whether Republican Karen Handel, who served as Georgia’s Secretary of State from 2007-2010, or Democrat Jon Ossoff, who was a Congressional aide to Rep. Hank Johnson, the dumbest member of Congress, would succeed Tom Price in Georgia’s Sixth District.

Some $31 million of that $40 million was spent on Ossoff’s side – $23 million of that went directly into his campaign. Handel nonetheless won a 52-48 victory in a Congressional district Donald Trump carried by only one point last fall.

You’ll see and hear a lot of analysis of the outcome and what it means today. Here are our thoughts on Handel’s win.

It isn’t defensible to spend $30 million on a House seat. It isn’t defensible to spend a fifth of that money. The Democrats went through $31 million in trying to get Ossoff elected and he got just under 125,000 votes, meaning they spent just under $250 per vote. Getting the Samuel L. Jacksons, Alyssa Milanos and Chelsea Handlers to provide appearances in the district on Ossoff’s behalf isn’t even counted in that.

Nobody has ever wasted more money in the history of American politics. And at the end it really wasn’t all that much of a nailbiter.

We like to say that the modern Democrat party is the single most effective tool for the destruction of wealth in the history of mankind. That’s been something of a joke, but at this point it’s a bit more serious. After all, look at the cities the Democrats run and see the blight and poverty they’ve wrought. Now, with the Ossoff race, they’ve inflicted that on their own donors.

At the end of the day, Ossoff’s defeat was completely foreseeable, and not just because he was running in a district that has been Republican for 40 years. He was, for all the money he raised, a terrible candidate. A job as a staffer for a congressman who publicly expressed concern that stationing more Marines on Guam would tip the island over is not a killer app where a resume for public office is concerned, and Ossoff’s current job as a filmmaker doesn’t exactly scream of qualifications for political power.

Worse, he didn’t even live in the district, and Ossoff’s various excuses for that didn’t persuade the voters.

Candidate recruitment in competitive districts is beginning to be a serious problem for Democrats, and it has been ever since 2010. Call that the Obama Effect, owing to the slow-moving electoral apocalypse the former president’s hard left turn has inflicted on that party. Democrats have seen their competitiveness in smaller races like state legislatures, county commissions, statewide officials and so forth decline very badly outside of safe areas like inner cities and college towns, plus their power bases on the East and West coasts, and Ossoff is a symptom of that – a healthy party would have a more accomplished candidate to offer against Handel, who’s been a political figure of note in Georgia for a decade.

Another thing we like to say around here is that the Left in this country has lost the ability to persuade the persuadables, and has largely given up on that endeavor. That’s one reason so much of what you see from the social justice warrior crowd and the Bernie Sanders/Liz Warren Axis amounts to an attempt to crush dissent and silence those with whom they disagree, rather than to actually win arguments, and it also perfectly sums up Black Lives Matter and Antifa.

But Black Lives Matter and Antifa, and the assorted others making noise on the Left these days with pussy hats all the way up to SKS rifles on baseball diamonds, don’t persuade. They repel. The Hard Left might be ecstatic about The Resistance, and they might feel like all the examples of how far their side is willing to go to show they won’t accept the results of the 2016 election – and all of this was practically the only thing Ossoff had to run on – but none of it works on ordinary Americans.

Republicans, when they’re running good races, will beat up Democrat candidates fairly viciously. Those attacks usually work when they do two things – paint the Democrat as culturally out of touch with normal folks, and show voters the negative results of policies the Democrat favors. Instead, Ossoff’s campaign and the third-party messaging of his allies focused on little more than what a jerk President Trump is, and it didn’t resonate.

The larger lesson which might be applied to 2020 is that it doesn’t really matter what Trump’s approval rating is if people hate Democrats more. That’s the same lesson 2016 should have taught, but they’re not learning it.

Really not learning it. 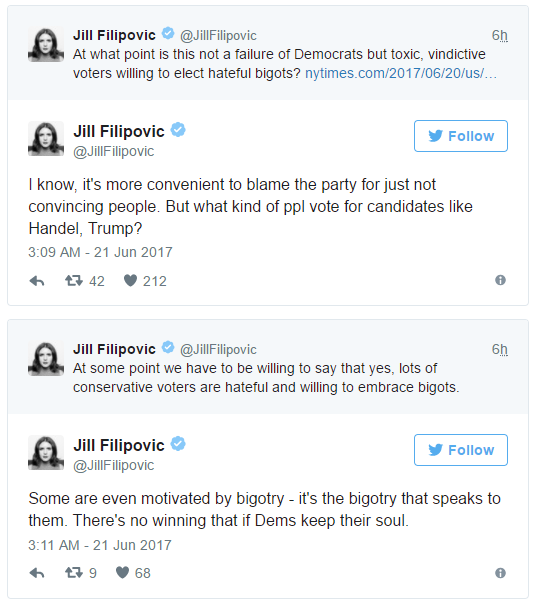 4. The “Stop The Violent Left” ad turned out to be a big hit

We had this ad here at the site yesterday asking the question what folks thought of it, and the responses more or less foretold the effect it would have in Georgia’s 6th District. Rick Shaftan, who put the ad together, said it was designed to ramp up turnout among conservative voters – whose support for Handel was a little on the soft side.

Based on the pre-election polls, compared to the final results, it’s clear the ad had its intended effect regardless of the pearl-clutching the smart set engaged in after it hit the airwaves. A WSB/Landmark Communications poll on June 18 had the race in a 49-49 tie, a FOX 5 Atlanta/Opinion Savvy survey on June 15 had Ossoff ahead 50-49, a CSP Polling survey on June 17 had it 50-48 for Ossoff. After the ad was released she won 51.9-48.1. The only pre-election poll which nailed the results was the Trafalgar Group, which had Handel over Ossoff by a 51-49 margin.

This ties in nicely with #3 above – it might be lots of fun for the Left to turn politics nasty and play revolutionary in the streets, but at the end of the day that doesn’t win elections. And when the other side calls you out on your behavior, they can move the swing vote against you.

5. Republicans can take solace from this result, but not much

The Handel win is certainly good news for the GOP, particularly taken in tandem with the other special election results in Congressional races since Trump’s inauguration. Republicans are four for four in those races. Greg Gianforte beat up a reporter a couple of days before the election and still won the Montana seat vacated when Trump made Ryan Zinke Secretary of the Interior, Ron Estes won the seat in Kansas vacated when Mike Pompeo was named CIA director, and last night in South Carolina Ralph Norman won current Office of Management and Budget director Mick Mulvaney’s old seat. And Handel, who is taking over for Tom Price in GA-06 after the latter has moved on to be Secretary of Health and Hospitals, makes four.

It should be recognized, though, that all of these are considered fairly reliably Republican districts, and every one of these races were competitive where they hadn’t been. Perhaps they’ve been safe because Zinke, Pompeo, Mulvaney and Price were well-respected leaders Democrats couldn’t hope to outclass, but these were all relatively light lifts for the Republicans.

What this means is there is no GOP revival afoot. The party is, at best holding ground. And while the Democrats’ wild talk about taking back the House in 2018 looks more unlikely than ever now, there is a lot of work to do before the Republicans can feel safe. They need to show some accomplishments in governance. Fix the healthcare sector. Pass meaningful tax reform. Drain the swamp. Show the economy is growing and creating jobs. So far there is minor progress on those issues, at best.

6. Watch the Democrats eat their own

You can’t place this much emphasis on one congressional race, push this much a narrative on how the race is a referendum on Trump, end up losing the race and not have a complete crack-up on your hands. Which, it appears, you now do among the Democrats. The Hill…

Squabbling among Democrats and liberals began before the final results were in from Georgia. The debate was conducted in raw terms.

The central issue was whether Ossoff had run too timorous and centrist a campaign to fire up the base. But, between the lines, it was easy to discern the pain of a party still struggling to come to terms with Trump’s victory over Clinton last November.

“One important lesson is that when they go low, going high doesn’t f**king work,” Neera Tanden, the president of the liberal Center for American Progress, wrote on Twitter.

Jim Dean, the chairman of the left-wing Democracy for America political action committee, lamented in an emailed statement that “Most candidates do not have the luxury of lighting millions of dollars on fire by spending close to $12 million on ads behind an uninspiring message.”

But others argued that the correct lessons to draw from the result were very different.

Rep. Seth Moulton (D-Mass.) tweeted that the outcome in Georgia needed to be a “wake up call” for the party. “Time to stop rehashing 2016 and talk about the future,” he said in one tweet, while emphasizing in a follow-up that the party needed to create “a bigger tent not a smaller one.”

Amid all the drama of the Trump presidency, the depth of divisions among Democrats — and the continuing rancor between centrists and progressives dating back to the Clinton-Sanders primary fight last year — has often been underreported.

There was no papering over the cracks after the Georgia disappointment.

Neera Tanden is a moron, of course, for two reasons – first, you really don’t get to characterize your side as “going high” when half of you are gleeful about Steve Scalise lying in a hospital and the other half are suggesting maybe his getting shot is karma for his political sins. Second, exactly what, given the above, would Tanden consider “going low?” Handel campaign volunteers were spit on, her neighbors and herself were mailed threatening letters with a suspicious white powder inside, her campaign signs were routinely stolen and the campaign on the streets devolved into lots of F-bombs and middle fingers delivered by Ossoff supporters to the opposition. Does Tanden suggest more James Hodgkinsons? Scenes from Gangs Of New York?

The fact that they don’t realize imposing a culturally dissimilar, unaccomplished 30-year old who doesn’t live in the district and is backed with 95 percent of his funding coming from outside the state of Georgia on the voters is a bad idea is why they lost. But that party isn’t learning that lesson any time soon. They’ll beat each other to a pulp in an attempt to avoid that lesson.

Which, more than anything else, is the saving grace for the Republicans until such time as Trump and the GOP majority in Congress actually get their act together.