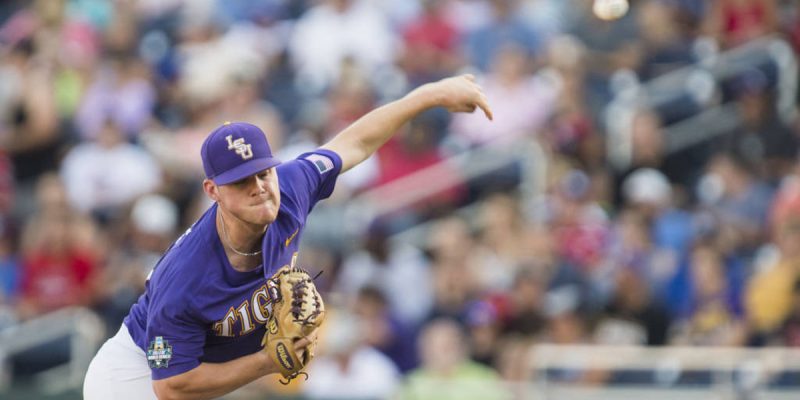 It’s not exactly Win One For The Gipper, but it’ll do. Jared Poche, LSU’s senior left-handed pitcher, came up with one of the best performances of his career in an elimination game against Florida State tonight – delivering eight strong innings until he ran out of gas and gave up two solo home runs to open the ninth. Poche left the game with a 7-4 lead which freshman fireballer Zach Hess closed out with extreme prejudice.

Poche held Florida State, the nation’s highest-scoring offensive lineup, to only two runs through eight innings. That effort was quite enough to sustain a lead the Tigers built with a five-run second inning, mostly on the strength of a 3-run home run by freshman first baseman Jake Slaughter. LSU then added a pair of runs in the top of the ninth on an RBI grounder by Antoine Duplantis and a double by Zach Watson.

That left Poche with a five-run lead and an opportunity to throw a complete game for the win, an opportunity he just didn’t have quite enough fuel for. Still, it was plenty enough for the senior, who passed up an opportunity to turn pro after being selected in the 14th round of the Major League draft last year, to earn the win. In so doing, Poche passed up Scott Schultz and set the new LSU career record for wins by a pitcher with his 39th victory, and his 12th of the season – the latter number being the best since Kevin Gausman’s 12 in 2012.

So it was a jubilant post-game huddle Poche joined, and it was little surprise when he was commanded to give a speech to the team.

Which Poche did, to results not quite as stellar as those on the mound…

LSU now faces the most daunting challenge in all of college baseball this season – they’ll have to beat Oregon State both Friday and Saturday in order to advance to the College World Series final.

The Tigers will send ace pitcher and Chicago Cubs’ first-round draft pick Alex Lange to the mound Friday against Oregon State’s Jake Thompson, who at 14-0 had the best record in the nation. That will be a matchup for the ages, and with the Tigers still stinging from the ugly 13-1 beatdown they suffered at the hands of the Beavers Monday, LSU has the revenge motive on their side. Tiger head coach Paul Mainieri said that should LSU win Friday he’ll be throwing sophomore Caleb Gilbert, who was a bright spot amid that terrible pitching performance Monday, going 2 2/3 innings and only allowing a pair of unearned runs as he tired and the defense in the fifth inning let him down, on Saturday. For Oregon State, if the battle should last until Saturday, the likely starter will either be Bryce Fehmel, for whom LSU had no answer on Monday, or first-round draft pick Drew Rasmussen.

And if LSU can accomplish the near-impossible and vault past Oregon State, the arm injury to freshman Eric Walker, who had to leave Monday’s game in the third inning with what we hope is not an injury requiring Tommy John surgery, becomes a major challenge.

Against either Louisville, TCU or Florida, the three teams remaining on the other side of the CWS bracket, LSU faces a difficult strategic question. All three teams have formidable aces to send up in the first game of the championship series on Monday – Alex Faedo for Florida and Brendan McKay from Louisville are especially difficult puzzles to solve. With Lange going Friday, the absolute earliest he could be available is the second game on Tuesday – even that would be pushing it. Poche could be available Monday.

But without Walker, there is no good third option. Especially given that Gilbert won’t likely be available to start after having gotten the nod Saturday.

So does LSU start someone like an Austin Bain or Todd Peterson on Monday, knowing it’s a low-percentage play, and then line up Poche and Lange for Tuesday and Wednesday? Or, depending on how much he’s needed out of the bullpen, does Hess return to the hill as a starter knowing that to do so would take him out of the mix as perhaps the best closer in college baseball at present?

It’s hard to say, and it’s also hard for Mainieri to make many decisions beyond Friday’s must-win tilt with the Beavers. At least for tonight, though, Poche is LSU’s hero – even if his coach-speak game isn’t quite Major League just yet.

Interested in more news from Louisiana? We've got you covered! See More Louisiana News
Previous Article Oh Look, JBE Is Spinning About The Budget
Next Article Montrell McCaleb Is Now Montrell Henderson, And He’s Still Out To Rip Baton Rouge Off