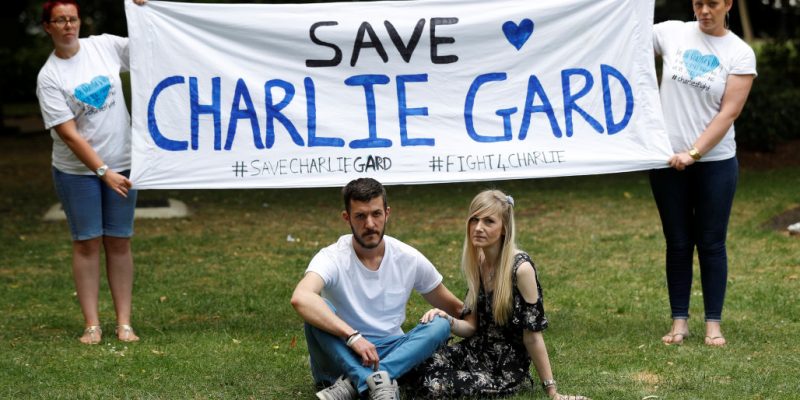 A day after a judge in London had ordered that British baby Charlie Gard be moved to hospice care and the life sustaining measures be stopped news came that Baby Charlie has died. Charlie would be a year old next week.

The case swept the world and angered many when it was discovered that a baby less than one-year-old was being denied possible treatment by British authorities.

As his brief life has ended let us go back to the beginning.

In Britain to be allowed to leave the country for this experimental treatment his parents had to go through and apply for an ethical waiver. While going through this process Baby Charlie had another round of seizures and the medical team withdrew their support for the treatment.

Even after ending their fight to fly their son to the United States for treatment to hospital forced them back into court to seek treatment for these final days in their home.

Charlie’s mother, Connie Yates pleaded “We promised Charlie every day we would take him home. It seems really upsetting after everything we’ve been through to deny us this.”

This story has broken the hearts of people around the world. Some grieving for the parents who could not help their son and others concerned that the child should not have to undergo experimental treatment.

Ultimately, we do not know if the treatment would have really cured Baby Charlie. People like myself do believe he should have been given the chance to try. When governments and administrators take away options from patients they do not value life by trying to give it dignity, they devalue it by ending the fight. This is a decision that should be left up to parents and patients. Especially when they are not asking the government to pay the bill.

This harkens back to the first end of life case I remember following. It was 2005 and I was still in college. The name Terri Schiavo was on everyone’s lips. Terri was a 41-year-old woman who had been collapsed from cardiac arrest in 1990. This lead her to be in what was called a persistent vegetative state. Even though there are videos of Terri being conscious and having interactions it was Terri’s husband who was about to remarry that sought to remove care. Her family fought fiercely to save her life. Governor Jeb Bush and President George W. Bush tried to intervene but on March 18th, 2005 feeding tubes were removed and she starved to death. She finally passed away on March 31st, 2005.

I remember sitting in Lisa Van Riper’s, one of my political professor’s, office and praying and crying for Terri and her family. That case greatly impacted me and our nation. I had no idea such a thing could happen in America and certainly did not think so many would call starving someone a dignity.

Bobby Schindler, Terri Schiavo’s brother said about the Charlie Gard case, “Charlie deserved the best available treatment in a timely fashion. Instead of providing that, the UK medical and legal fields let Charlie languish and deteriorate to the point where treatments that have worked for other children like him no longer had a chance. Charlie Gard is a victim of a culture of medical indifference that turned out to be as corrosive and ultimately lethal as was his underlying genetic condition. His parents are heroes for fighting for him.”

Cases like Charlie Gard and Terri Schiavo continue to happen regularly all over this country, but few rarely take notice. It even happens right here in Texas where treatment and do-not-resuscitate orders can be placed on patients without their consent.

Bills have been filed repeatedly to end this practice in Texas, but have died in Representative Byron Cook’s committee without a hearing. Governor Greg Abbott has tried to remedy this, but once again Byron Cook, who claims to be pro-life and is lifted up as an example by Texas Alliance for Life, has yet to even call a hearing for the bill. These are the games that lead to cases like Baby Charlie. If a hearing is scheduled they wait until too late in the process to get the bill through the process.

Maybe this time will be different. That is what I keep telling myself as I go down to the Texas Capitol session after session. Maybe this time we can finally get our pro-life agenda passed without having to pray for a bill we can just amend. I do not know if it will or not, but I pray if Charlie Gard’s short life shows us anything it is that patients should be making these decisions and not administrators and judges.

If you’d like to see the end of life reform passed in Texas take a moment to call Chairman Byron Cook’s office at (512) 463-0730 and demand DNR reform finally pass in Texas and pass quickly. May there never be another Charlie Gard case in our lifetime in any country.

Interested in more news from Texas? We've got you covered! See More Texas News
Previous Article APPEL: On Failure, And Consequences, Of The Obamacare Repeal Vote
Next Article Lies, Cronyism And Corruption: What Sharon Weston Broome Has Done To The BRAVE Program