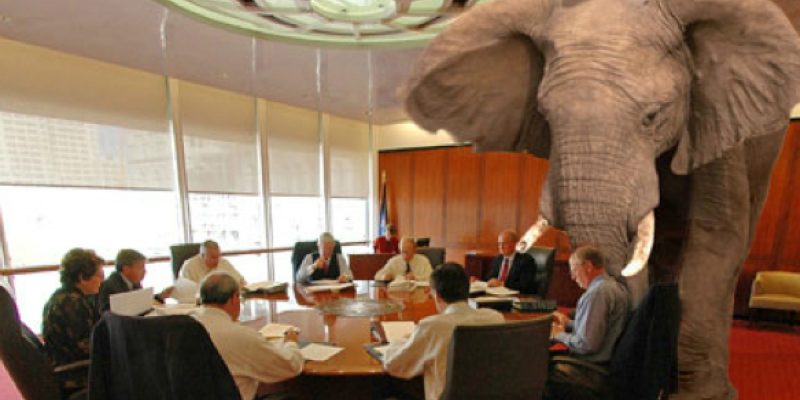 Mitch Landrieu talks national topics, ignoring the elephant in the room, and the media plays along.  Mitch had a big media announcement last Friday signing an executive order on “Climate Action Strategy,” and while he did this, the city is in the heat of a crime extravaganza.  Picture the elephant in the room with an AK-47 and the flock of reporters wearing blinders like you see on the French Quarter tour guides’ donkeys, while Mitch Landrieu blabbers away about how smart he is.

Yes, Mitch talked about crime and violence during his State of the City address.  Instead of following it up by announcing an anti-crime initiative, the next day he talked about climate and renewable energy.  This was Mitch’s priority, one more national issue from our absentee mayor.  Fox News’ Tucker Carlson criticized Landrieu for his obvious misdirection.  But where is the local and state media in this?

The Sunday Times Picayune front page featured bullet casings in an artistic display.  The head line read “Six Months of Carnage.”  “Through the first half of the year, shootings are up sharply across the city.”  Yet Mitch talks about everything else.  Monuments are murder, monuments are burning crosses, New Orleans needs to be a renewable energy leader (if anyone survives until 2030).

Neither the Picayune nor the Advocate commented on Mitch’s misdirection climate campaign to avoid owning the crime catastrophe.  Nothing from their columnists, not an editorial, not a single letter to the editor.  It can only be a few options:
1. The entire contingent of New Orleans journalists is lazy and unmotivated.
2. The news industry covers up for its darlings such as crime kingpin Mitch Landrieu.
3. The ignorance and silence as to Landrieu’s absurd priorities must come from the top.
The most likely answer is 2 and 3.  And that means owners, news directors, editors, and executives of the news outlets–television, print, and internet–must be fine with the Mayor of New Orleans doing his best impersonation of Bobby Jindal while violent crime infiltrates every part of the city.

The New Orleans media does not care about the safety of its readers, viewers, subscribers. It has gotten so bad that the Mayor was recently afraid to go to a crime scene to talk with reporters about a multiple victim drive by shooting.  The media knows this.  Yet they do not challenge Landrieu, they cover for him.

The news industry is in an unsettled state, partly due to technology, but also due to the unabashed bias.  President Trump railed against “Fake News” during his campaign and continues to push back against reporters.  When it comes to politics and elected officials, the mainstream news media–local, state, and national–is not consistently holding government accountable.  Somehow, journalists have largely failed to observe this.  And that is why people are turning to alternative news sources.

Interested in more national news? We've got you covered! See More National News
Previous Article Good News On The Pro-Life Front – Abortion On The Decline In Louisiana
Next Article Frank Scurlock Puts Up $500K For His Bid To Be NOLA Mayor