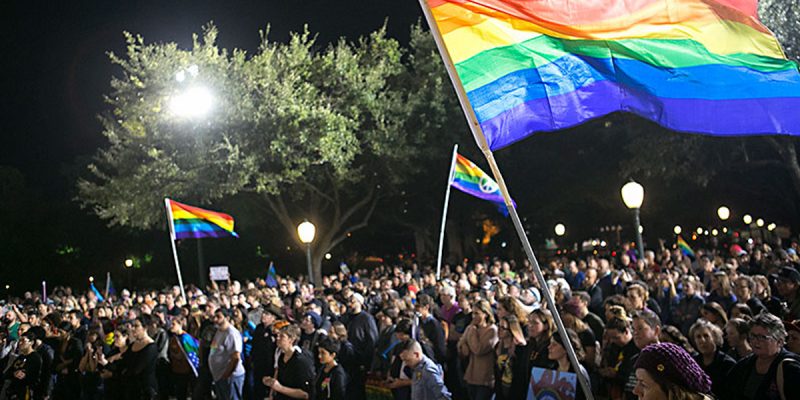 After years of running from, hiding, and denying my sexuality at 33 years old, I have finally begun to accept myself. Sadly, some of the gay community refuses to accept people like me and makes me wonder where a gay Republican really belongs.

I grew up in a small town called Laurens, SC. It is most famous for having a redneck store with a Ku Klux Klan museum on the town square. A nice enough town, but not a place you wanted to be openly gay. I grew up going to church and viewed that as family. I even went to a Southern Baptist college where I was class president throughout my study to be a missionary. My faith was and is important to me, but with that came a lot of struggle knowing I was gay. I fooled around some in high school, but chose celibacy for over a decade. I even came out as openly gay, but celibate.

I’m now 33 years old and have come to appreciate my sexuality more. I still struggle with it and my faith and do not pretend to have answers. But I am moving forward and building a life for myself and hopefully will one day finding a partner to share in that life.

You see, this year Pride was not about celebrating openness and diversity. It was about hatred. It was about hating Republicans, Trump and anyone who might not fully embrace a liberal paradise of ideology.

In Charlotte, NC a group called “Deplorable Pride” was denied the ability to participate in the annual Pride parade.  In Los Angeles, CA the the annual Pride Parade was turned into a resistance march.

Here in Austin, TX there was an Equality March for “Unity and Peace.” But from listening to the organizers and speakers it was more about attacking Republicans like Gov. Greg Abbott. There are still supposed to be actual Pride celebrations in Austin in August so we will have to wait and see what becomes of those.

Every weekend there is a march or a rally or some protest against President Trump. I understand that. I’m a lifelong Republican and even I could not bring myself to vote for him. Yet, the anger is so great and the calls for ideological purity have grown so high that the one time a year LGBT people should be able to come together and celebrate was hijacked. It turned from a time of dancing to a time of marching, from a place of acceptance to a place of anger, and from a place of love to a place of hatred.

Being an openly gay Republican is not always easy. I have a lot of discussions and disagreements on my side of the aisle about the role of government about what protects religious liberty and what promotes discrimination. But at least here I am allowed to have those conversations. In the GOP, I can argue and debate one issue and come together on another. I feel more welcome by a group whose platform says “Homosexuality must not be presented as an acceptable alternative lifestyle” than in group where I am told to sit down, shut up, and get in line. I will never agree with many gay Americans on policy, but I am grieved that after a life time of waiting I can not even have a day of celebrating the thing we do have in common, our humanity.

If “Love Wins,” the LGBT left has lost.