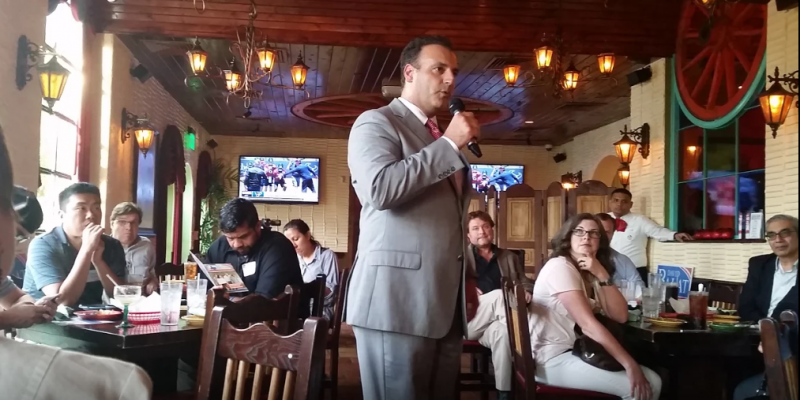 Members of Congress have only been sworn in a mere six months, but a slew of challengers have begun their campaigns for the 2018 midterm election. Speaker of the House Paul Ryan’s Democrat challenger has already announced for Wisconsin’s first district, and launched a You Tube video that has received much attention. Closer to home, Austin’s Lamar Smith (TX 21) has earned himself at least four Democrat aspirants for the nomination to oppose him. Neither appears to have drawn a challenger in his own primary as of yet.

But Houston’s John Culberson (TX 7) has already acquired a primary challenger, health care executive David Balat. Balat has begun visiting local groups and introducing his campaign to Republicans in the district, most recently hosting a meet and greet event at El Tiempo Cantina on Gessner. The crowd in attendance included several district Republican precinct chairs getting their first look at the candidate.

Born in Houston to immigrants who owned their own business, Balat attended the University of Houston, started his own businesses in town, and is raising his two children in the Meyerland area with Lauren, his wife of twenty-one years.

Balat began his remarks by noting that Republicans have control of government, and yet Congress continues to spend money, fight to bring back earmarks, and concern themselves more with re-election than with serving their districts. “Elected leaders are more concerned with their own longevity than they are with the people they represent,” he told the room. Talking about flooding in recent years in Meyerland, and the response from Culberson in print at the time, he added: “There shouldn’t be rhetoric without action. I think we see too much of that…There’s definitely a difference between a politician and a representative.”

As someone working in the health care field, Balat spoke confidently about the current legislative struggles over repealing or repairing Obamacare. “I can tell you without a shadow of a doubt, that Obamacare must be repealed, plain and simple.” He explained that the current bills in Washington have added $200 billion in subsidies, which he labeled bailouts for health insurance companies. “A bailout is not going to reduce the cost of anything. The automotive industry, when they received their bailouts, we didn’t get cheaper cars. We are not going to see the reduction in premiums due to this new plan. The only thing that reduces cost is competition, and they’ve got to create a level playing field, and stop playing favorites and picking winners and losers.”

He noted that most people in Houston have connections to the energy-sector and that the district is the heart of the energy capital of the world. The current representative, he claims, is ignoring the concerns and pain points of energy executives, instead of creating conditions to contribute to their success. He also charged current Republican officeholders with layering taxes upon taxes, stifling economic growth for the area and the country.

Balat told the crowd he feels called to run and to take his skill set from the health care industry and the business world to bring some of that discipline to Congress. His campaign hashtag #ArmyOfDavids reflects his understanding of the challenges facing him both in his campaign now, and in serving in Congress should he win.

As he worked the room, talking individually to the voters who came to hear from him and evaluate him, he listened to their concerns, and also hoped to recruit them into that army. He knows he will need them in the long campaign season ahead, and isn’t wasting any time. His campaign is working to get in front of as many people as possible from the district who feel, as he does, that it is time for new leadership in District 7.

See the video of his remarks:

This isn’t the first primary challenger the congressman has faced.  Culberson faced challenges in the 2016 and 2012 primaries, hanging on to the nomination with 86% in a two-way race in 2012, but netting only 57% in a three-way race last year.  Additionally, the district voted for Hillary Clinton instead of Trump in the 2016 election, something that both Democrats and Balat believe may play to their advantage.