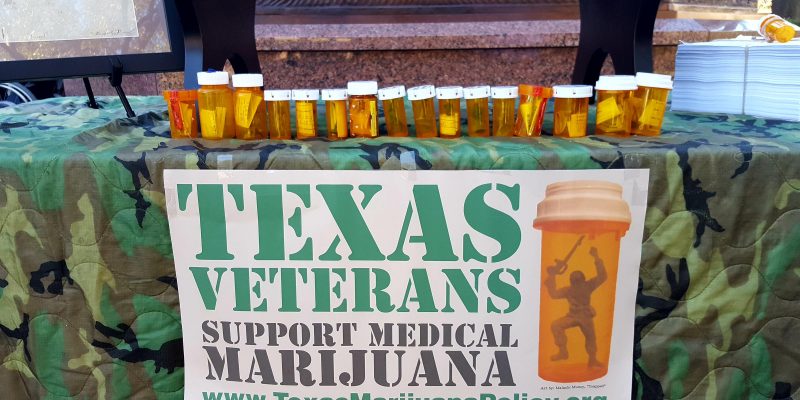 For more than two decades the fight for medical (and recreational) marijuana has been a major discussion in the United States. Beginning with California in 1996, over half of the states in the nation now permit medical marijuana use in some way. Some would include states like Texas in that list, but given the extremely limited scope of medical marijuana use in Texas, most activists leave it off the list.

*Note: The term “marijuana” is being used in place of “cannabis” because of the legal language used in many states. The terms “medical cannabis” and “medical marijuana” are interchangeable for the purpose of this article.

Of the +25 states with medical marijuana, roughly have passed their measures through legislative actions, with the other half have utilizing ballot initiatives. A recent strategy for Democrats has been to use these ballot initiatives in an effort to boost millennial and minority turnout in support of Democrat candidates.

This seems to be the goal of a group in Missouri to provide Claire McCaskill with a boost in her Senate re-election bid. Polls currently show Sen. McCaskill trailing between three and seven points behind any potential Republican opponent.

While their messaging in support of veterans and individuals with health issues is noble, their other actions are not. The group is openly discouraging any legislative action before 2018. This way it can remain an issue to attract Democrats and claim this as their issue.

When Missouri State Representative Jean Evans posted a photo of how happy she was to meet with veterans about “medical cannabis” New Approach Missouri left a comment discouraging the legislative efforts.

Honored to meet with these Vets today who are in Jefferson City to advocate for Medical Cannabis. #Heroes

The comment has since been deleted, unclear as to whether by someone who got wise in New Approach Missouri or from someone on the representative’s campaign, but it read:

“we encourage you all to help gather signatures with the New Approach Missouri campaign to legalize medical cannabis in Missouri, with a portion of the sales tax going to support the Missouri Veterans Fund. Don’t wait for lawmakers to one day pass a half bill that will only help a small portion of the many people in need. Stand up now and help gather signatures to put the NAM initiative on the ballot in Nov 2018 for the people to vote YES on. This will be a constitutional amendment which means that the lawmakers can’t go in and gut the initiative once the people pass it. The list of conditions is very inclusive and allows for doctors and patients (not lawmakers who have no medical background or knowledge of the patient) to decide if medical cannabis could hep their conditions. Learn more at www.newapproachmissouri.com” 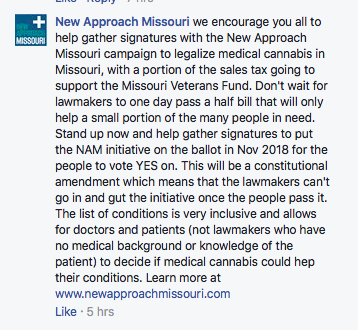 Leave it to a petition by democrats to be 13 pages long, create more regulation than the legislative counterparts, and actually tax the medicine they propose. Other medicine in Missouri is not subject to tax so this would not only treat much needed medicine different from other prescriptions, but it would open the door other medications being taxed in Missouri.

When asked about marijuana in a 2014 town hall, she proclaimed, “I guarantee you that there are kids who are getting handed beers every day. So it’s not like those same ones handing them beers aren’t gonna hand them a joint.”

In another 2014  town hall, the former prosecutor turned politician refused to acknowledge support for medical marijuana for veterans with PTSD.  She even went so far as to say,  “I would love to find somebody in Missouri who has been imprisoned for just smoking pot.” According to readily available data, approximately 20,000 Missourians are arrested each year for possession. This is a staggering number when compared to Texas, which has 70,000 annual arrests but nearly five times the population.

Thankfully, Missouri’s Republican-led legislature did decriminalize small amounts of marijuana beginning in 2017, making up to 10 grams a Class D misdemeanor.

Meanwhile, in many Republican circles, medical marijuana has picked up a lot of support, especially for children and veterans. In Texas, for the second session in a row, a strong medical marijuana bill with dozens of Republican co-sponsors passed out of its initial committee only to die in the Calendars committee. Even the current Republican Party of Texas platform promotes medical marijuana,  stating “[we] call upon the Texas Legislature to improve the 2015 Compassionate Use Act to allow doctors to determine the appropriate use of cannabis to prescribed patients.”

With Republican support for marijuana reform and especially medical marijuana, on the rise across the country, the media continues to portray the party as promoting anti-veteran, anti-marijuana bills. Unfortunately, this view is reinforced by rhetoric from U.S. Attorney General Jeff Sessions, who recently asked Congress to allow him to prosecute medical marijuana providers. Such stories unsurprisingly spread much faster than ones about the Republican-controlled Congress refusing to allot funds for any prosecution against state marijuana laws.

Stories like Congressman Matt Gaetz’ (R-FL 1) impassioned defense of medical marijuana research is the type that GOP activists should be sharing nationwide.

Posted by Republicans Against Marijuana Prohibition on Wednesday, July 12, 2017

Republicans can and must get ahead of this issue to change the narrative. Letting it continue to be a ballot issue in support of Democrats is harmful to the overall Republican agenda. Republicans may not completely agree on medical marijuana, but there is more than enough support for elected officials to feel bold in taking a stand.

Thankfully, groups like Republicans Against Marijuana Prohibition (RAMP) are popping up across the country in support of GOP lawmakers, by providing messaging and strategic planning.

Make sure to follow The Hayride on social media and check back for my follow up article language for Republican marijuana advocates.