According to Clancy DuBos at Gambit, it’s possible. Peterson is apparently about to throw her hat in the ring to finish that city off.

State Sen. Karen Carter Peterson is very close to deciding whether to run for mayor of New Orleans and promises an announcement before qualifying opens July 12.

“It won’t be some 4 o’clock thing on Friday,” Peterson told Gambit. “I’m doing all the due diligence that a serious potential candidate has to do.”

Peterson, who has been in elective politics for almost two decades, stopped short of saying she has decided to run. The fact that she is giving the race this much consideration at a relatively late hour, however, suggests strongly that she is a likely entrant into the race. The last three New Orleans mayors all announced their respective candidacies shortly before qualifying, after others had announced months earlier.

Peterson’s name has been mentioned off and on as a potential candidate for mayor during the current political season, and in past election cycles, but in recent weeks the talk of her possible candidacy has increased.

Peterson said she has been “encouraged by many, many friends” to enter the race based on the current announced field. That field includes former Judge Michael Bagneris, District B Councilwoman LaToya Cantrell, former Municipal Court Judge Desiree Charbonnet and businessman Frank Scurlock.

Truth is, New Orleans is doomed to poor leadership no matter which one of these people were to get elected – with a slight possibility Scurlock could be the exception; in his case it’s irrelevant because there is zero chance the eccentric businessman could win.

But with Peterson it would be like a massive sinkhole would open up and swallow Orleans Parish whole. Letting someone that temperamentally unsuited for leadership and with that combination of runaway leftism and rapacious appetite for power take over a major American city would make for a political disaster even New Orleanians aren’t prepared for.

We could recount all the examples of Peterson’s uncivilized, boorish behavior and periodic childish tantrums at the legislature. Our readers already know them. If you want to read up on them, click here. They speak for themselves. That she would make Mitch Landrieu’s seven years of humiliation look like the Eisenhower Administration is unquestionable.

Instead, we’ll just direct you to something substantial. Here’s Karen Carter Peterson’s LABI record as a state senator. This is what the city’s economy would be in for if she got elected… 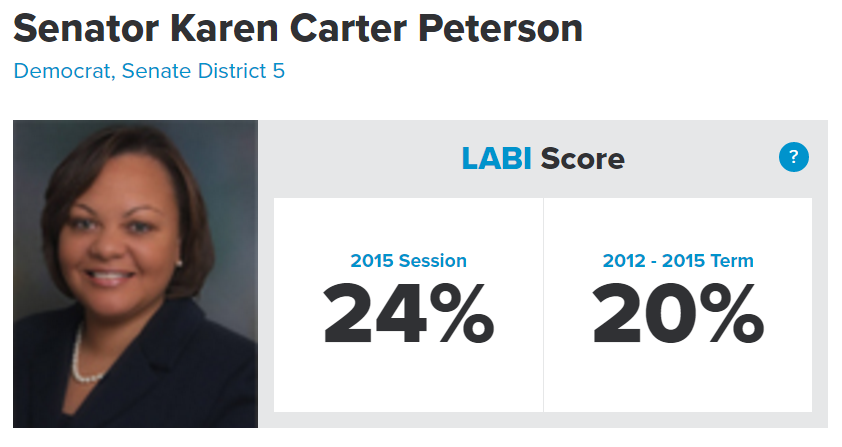 That was up to 2015, when the legislature was strongly influenced by Bobby Jindal and the bills going to the Senate floor reflected that reality.

In 2016, when John Bel Edwards took office and the tenor of the legislation changed a bit, her LABI score was, well, worse…

Yes, JP Morrell and Regina Barrow (who is from Baton Rouge in any event) are worse, so yes, Peterson isn’t the worst of all possible candidates – theoretically speaking. Morrell’s name has been tossed around as a potential candidate, but you can bet your bottom dollar he won’t run if Peterson does.

New Orleans, as poorly run as it’s been for the last half-century or more, has a tradition of electing that candidate out of a field of left-wing Democrats who makes the best effort at positioning himself as pro-business. Even Landrieu, who has been a disaster for the city’s economy, paid lip service to economic development – as did Ray Nagin, Marc Morial, Sidney Bartholemy and Dutch Morial before him. Peterson would be a departure from that – she is a pure social justice warrior and nothing else.

We’re not even going to pretend we can have any influence in the mayor’s race in New Orleans. All we can offer is a warning to the people of that city – if you let Karen Carter Peterson win that race, be prepared for results which make Katrina look like a summer rainshower. And unlike after Katrina, nobody will be coming to bail the city out and repair the damage.

Just saying. You were warned.