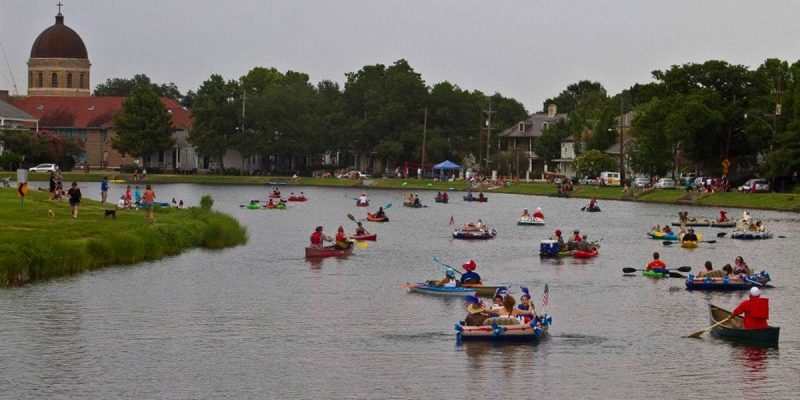 The founder of the Krewe of Kolossos announced recently she was canceling the 4th of July Boat Regatta on Bayou St. John after five years because Donald Trump soured her on this year’s parade.

Many of the neighbors living along Bayou St. John were thrilled because they say parade-goers have typically trashed the area during their 4th of July festivities and didn’t bother cleaning up.

But it turns out the parade will go on with a new group called Indivisible New Orleans – the same bunch who have been harassing members of Congress at town halls. They are calling the parade “kayak-tivism.” Get it?

The new organization, much like the previous one, seems to have been struck with Trump Derangement Syndrome.

According to the event announcement, Indivisible is “a grassroots ‘resistance’ organization in response to the current administration.” They don’t advertise the fact that their members are known for booing invocations and pledges of allegiance – which doesn’t exactly advertise their fitness to put on a 4th of July patriotic celebration.

So if you like to celebrate our nation’s birthday by protesting our current president than this may be the feel-good summer event for you.

The parade announcement reads: ”This is not just about what we are against. In this time of bitter division and extreme partisanship, we realize that though we don’t necessarily agree on how to achieve it, we essentially all want equity, opportunity, safety, quality healthcare, and education, a functional infrastructure, and belonging in our communities.

If you are interested the event starts Tuesday, July 4, at 5 p.m. and will continue until 7 p.m.

Interested in more news from Louisiana? We've got you covered! See More Louisiana News
Previous Article UPDATED: TMZ Reports An LSU Linebacker Is Under Investigation For Rape, But It’s Confusing…
Next Article Hayride Texas Is Coming On The Fourth Of July