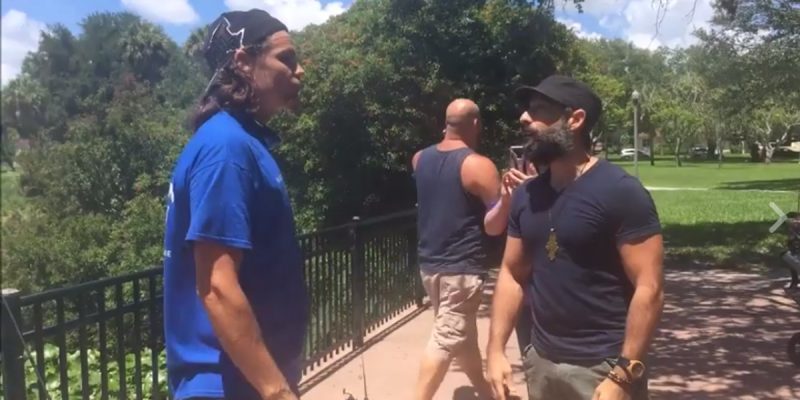 This might be the most ridiculous thing you’ll see all summer. It’s video taken by an animal rights activist in Florida who takes it upon himself to bring his kids to verbally assault a pair of men fishing off a bridge over a small lake in a public park in St. Petersburg, Florida.

The animal rights nut belongs to something called That Vegan Activist Family, which has a YouTube channel full of complete idiocy. And the protest in question – coming up to people fishing off a bridge and harassing them for doing so, and then throwing the fish one of them has caught back into the water – was make in conjunction with a group called Direct Action Everywhere Pinellas. More on them shortly.

Here’s the video, which is outrageous. Imagine being on the receiving end of this treatment…

WTSP-TV has more on this craziness…

A St. Petersburg father is speaking out after his video, that shows a group of animal rights activist confronting his family, went viral. The video was sent in by viewer Bob Hope.

Hope says his father caught a 4 lb. tilapia and laid it on the sidewalk while someone brought him a bucket.

The animals rights group called Direct Action Everywhere Pinellas was close to a child that was with the group approached Hope that he was concerned about the fish. The boy also told him that fish have feelings and to release it back in the water.

“I turned to him and said I respect your opinion but I don’t share your opinion so we’re going to continue fishing. That’s when six or seven people ambushed us that what we were doing is wrong and we’re hurting the fish,” says Hope.

Kayla Leaming with Direct Action Everywhere Pinellas says they were simply just trying to save the lives of animals and did nothing wrong.

Leaming explains that her 9-year-old son was very respectful.

“These grown men were extremely hostile and laughed in his face,” says Leaming.

Leaming says the group has been getting death threats and now worries for the safety of her children.

The police were called, but nobody got arrested.

Direct Action Everywhere is a loose national organization of obnoxious, unhinged animal rights people who do things like stage attacks on civilized people dining in restaurants. Like this case back in 2014, for example.

As to Direct Action Everywhere Pinellas, here’s another example of their handiwork…

They showed up at a Chik-Fil-A with fake bloody knives and started screaming about murdered animals. In front of a bunch of kids in the restaurant.

Luckily for these loons the wrong kind of people weren’t in the restaurant, because someone easily could have looked at those knives as deadly weapons and decided a prudent course of action would be to disarm the protesters using whatever violent means might have been necessary.

If this continues, violence is inevitable. People are not going to put up with this kind of activity for long.