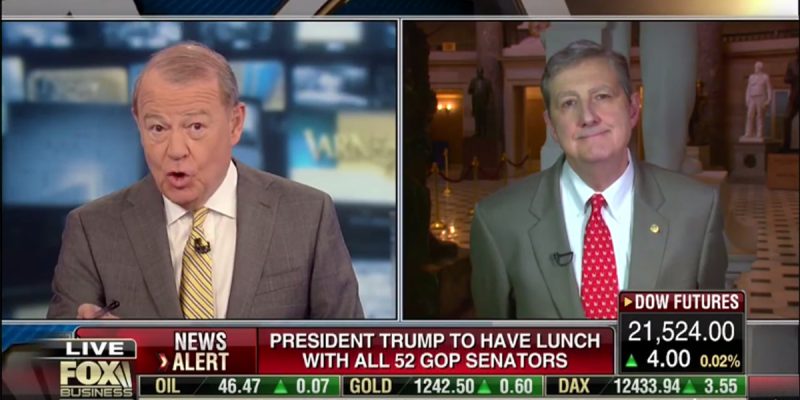 This was from this morning on the Fox Business Channel, as Sen. John Kennedy appeared with host Stuart Varney to discuss the plight of the GOP majority in the Senate and the Obamacare repeal vote coming early next week.

“It is time to vote,” Kennedy says about the Obamacare repeal bill expected to hit the Senate floor early next week. “I am prepared to vote this afternoon, tomorrow or next week. You either like Obamacare or you don’t. It’s time to stand up and be counted before God and country and do what the American people elected us to do: Repeal Obamacare.”

The question is whether that vote will be a win for the Republicans and Majority Leader Mitch McConnell. At present, McConnell is at least one and perhaps two votes short of the 50 votes he needs to create a tie in the Senate that Vice President Mike Pence can break. Of the 52 Republicans in the Senate, three – Susan Collins, Lisa Murkowski and Shelley Moore Capito, have publicly come out and said they wouldn’t support a straight repeal. Similar noises were made by Sen. Rob Portman, though not as definitively as the others.

Kennedy’s Louisiana colleague Bill Cassidy didn’t offer a particularly encouraging stance, either, from McConnell’s perspective – at least, if the New Orleans Times-Picayune’s reporting is to be believed…

“I still would like to find an alternative. I’ve reached out to Republicans and Democrats. I am still working on an amendment with Sen. Graham,” said Cassidy Tuesday. “We are not giving up.”

Cassidy has been an outspoken advocate of a repeal-and-replace strategy where Obamacare is concerned. He said he would definitely be a yes where the procedural vote to begin debate on a straight repeal would be concerned, and one would have to think that despite the Times-Picayune’s insistence on casting him as a Portman or Murkowski Cassidy would be on board with a repeal he voted for in 2015.

After all, his entire strategy of crafting a bill that allows states to operate according to the precepts of Obamacare, which he’s been working on for a year, is built on the idea of attracting some Democrat support. That’s a strategy which has no chance of success while Obamacare is still on the books; the Democrats refuse to engage in any constructive fashion with any proposals seeking to alter federal policy on health insurance. It’s only after the status quo is taken away from them that the possibility of getting Democrats to cross the aisle and support some positive changes can arise.

Meaning it’s hard to see Cassidy as anything but a yes vote on a straight Obamacare repeal, however squeamish he might be about it. Kennedy, on the other hand, presents a far clearer position.