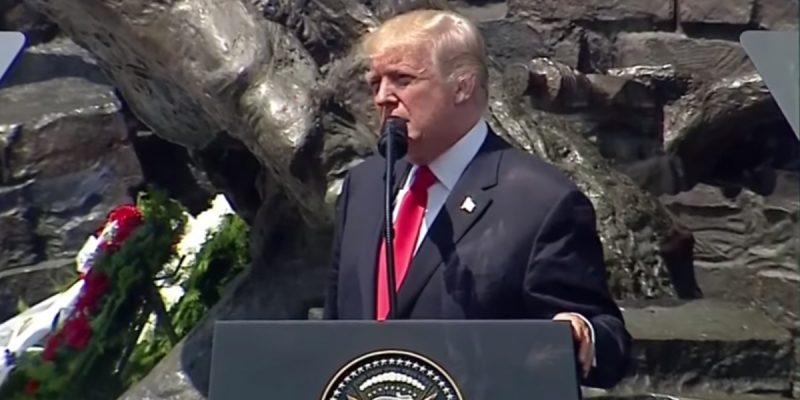 You wouldn’t expect a particularly comprehensive articulation of the case for Western civilization out of a man who spends his early mornings posting cranky tweets about people who criticize him on TV, but that turns out to be exactly what Donald Trump had on offer yesterday in Warsaw.

Speaking at the strikingly and hauntingly beautiful monument to the Warsaw Uprising, Trump had the perfect venue and the perfect audience for a speech exhorting the people of the West to stand up and fight for our values and way of life against threats both internal and external. Poland, after all, has been invaded, brutalized, oppressed and looted for centuries by larger, stronger neighbors – and yet the Poles have emerged from that terrible history as one of the proudest, strongest, most intact countries in all of Europe. They’ve done this despite difficult economic circumstances and a near-constant threat of more military aggression next door as the saber-rattling Vladimir Putin puts all of his neighbors under the specter of war.

So the Poles have little time for multiculturalism, open borders, creeping socialism or surrender to radical Islam. The Poles are one of the few countries in Europe not to participate in mass immigration from the Middle East, and as such Polish streets don’t run with the blood of the terrorists’ victims. And Poland is one of the few countries in Europe in which Christianity isn’t in a state of collapse.

And in Warsaw, Trump extolled the value of Poland’s commitment to its traditions and national culture in order to advocate the rest of the West follow its example. He offered a stirring defense of faith, family, capitalism and civil society in Warsaw yesterday – a speech with great historical value and a certainty to drive the Left over the edge with rage.

We’re learning to take the bad with the good where Trump is concerned. Every now and again he knocks the ball out of the park. Yesterday was one of those times.

Interested in more national news? We've got you covered! See More National News
Previous Article Trump’s Economy Is Beginning To Perform So Well That The Unemployment Rate Is Rising
Next Article FAGAN: (Video) Baton Rouge Activist Caught On Tape Saying Many More Black Panthers Are Heading To Baton Rouge And They Will Bring Violence