…to the Legislative Auditor, Daryl Purpera, over last week’s revelations about what Baton Rouge mayor-president Sharon Weston Broome has been doing to the BRAVE program and the resulting negative effects to law enforcement in the Capitol City.

Here’s the letter, with some context below… 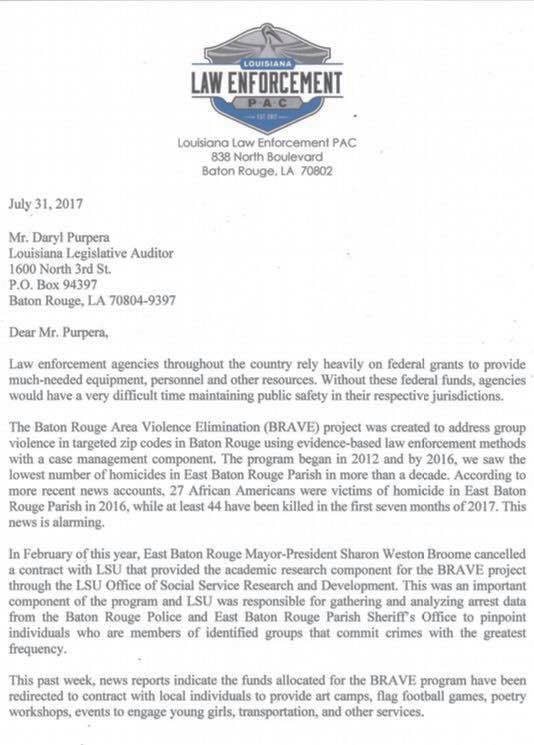 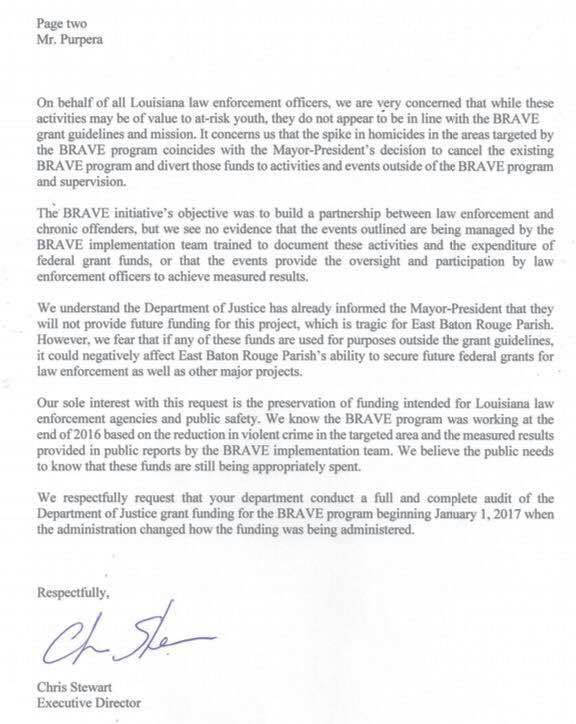 The Louisiana Law Enforcement PAC is a relatively new outfit started up in April by former Baton Rouge police chief Jeff LeDuff, who is still highly respected in town. LLEPAC’s website is really just a landing page, but they’re relatively busy on Facebook.

The big takeaway from this letter is a confirmation of something we assumed but became a little nervous about over the weekend after the furor arose – namely, was the granting of monies to various “community activists” allied politically with Broome for a number of “soft” projects without an identifiable nexus in combating crime part of the BRAVE program all along?

Under the BRAVE ambit, after all, there had been a goodly amount of community outreach. But most of that, if not all of it, involved volunteering by the police officers themselves rather than hiring contractors at top-dollar hourly rates to conduct poetry workshops and flag football tournaments, and give people rides to and fro.

Now we know all of that is new stuff, and it looks pretty clear what’s been happening – namely, that Broome and her allies looted the BRAVE program to provide political payoffs, and as the letter notes the murder rate in Baton Rouge has skyrocketed as BRAVE has ratcheted down.

This really couldn’t be worse. It’s a bright-line indication of gross negligence and mismanagement coming out of the mayor’s office, and with the federal government pulling the matching funds from the program it’s also a “this is why we can’t have nice things” narrative moment.

It’s a strong indication that Baton Rouge is in a downward leadership spiral. For LeDuff, an African-American former police chief in town, to have his executive director send out that letter demanding that the state investigate the abuse is a strong sign that the law enforcement community has no faith in the city’s chief executive.

UPDATE: Metro Councilman Buddy Amoroso is also asking the Legislative Auditor to look into the BRAVE program’s administration, and in his letter he expresses concern that “contracts were being given to what appeared to be friends of the Mayor-President.” Amoroso threw in a separate letter to state Inspector General Stephen Street.