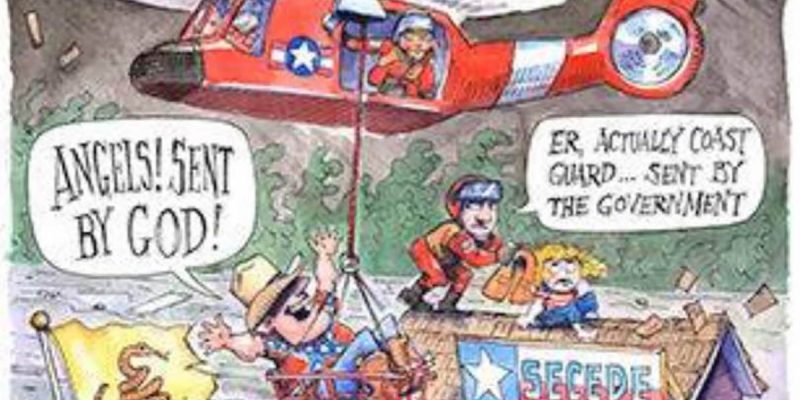 Southeast Texas has endured one of the worst natural disasters to occur in America, with Hurricane Harvey dumping 19 trillion gallons of water on the Houston area.

No city, no matter how technologically-engineered their drainage and pump system is, could handle such a deluge.

And though the recovery in Texas is just beginning, the world has seen the best in humanity on display as neighbors help neighbors, strangers traveled great distances to help people escape their inundated homes, and efficient cooperation between the federal government and the state government (something that was woefully lacking during Katrina).

And we have seen the famed “Cajun Navy,” private citizens in Louisiana who used their shallow-draft and flat-bottom fishing boats to rescue people across the Baton Rouge metropolitan area when the heavens opened up last year, hitch their watercraft to the back of their pickup trucks and SUVs and head west on I-10 to participate in another “Dunkirk of mercy.”

Who has been conspicuously silent? That would be the leftist professional protestors, including the Antifa crowd – of which one sympathizer was apprehended attempting to blow up a statue in the middle of the Houston museum district a few weeks ago.

Where is the BLM Naval Auxiliary? Is Hurricane Harvey and its 20 trillion gallons of rain water not a greater threat than a statue of a Confederate soldier or the local police department?

What about the “pink hat” womynists flotilla? 22,000 proud feminists and their allies paraded through the streets of Houston when Donald Trump was inaugurated.  That’s one heck of a potential reserve to save lives, women, immigrants (those with and without papers), and the transgendered.

And then there are the scientists! 15,000 people (probably most of the same from the aforementioned protest – they just change their chapeau, t-shirt, and hopefully socks) should have anticipated such an environmental calamity and been prepared to plow through the water with solar powered rescue vehicles.

They’re too busy tweeting “I told you so” via the complimentary wifi at an Embassy Suites in Fort Worth.

No, when real work is required, one best call a redneck. The same applies to both the Walking Dead and natural disasters.

Despite the many scenes of compassion, selflessness, and sacrifice, we have seen a whole lot of ugly and pettiness.

First up was the firestorm unleased upon Joel Osteen for not opening up his megachurch, a former basketball arena, to storm victims. A spokesman for the church claimed the facility was flooded and it was inaccessible due to water.

Why a single building would be targeted for criticism in the midst of rescue operations is ridiculous. Many Christians who do not subscribe to Osteen’s “Prosperity Christianity” were only too happy to join the dogpile.

Or in other words they swallowed the bait the anti-clerical crowd dangled out there to discredit organized religion in general.

There will be a time and a place for Osteen’s efforts and conduct to be judged; and it’s after the last person is plucked from the roof he hacked his way out of.

Osteen and his operation swung into action thereafter but that such a personalized attack was leveled at a private citizen (as opposed to city officials who dragged their feet on conducting a coordinated evacuation) shows how adept the left is in playing the game of mobpolitik.

Moving along there was the First Lady and her footwear.

Ms. Yaeger, who I encourage you to google if you ever read the epic Beowulf and are curious to learn what Grendel’s mother probably looked like, also worked in a jab about Melania’s convention speech.

But the award for lack of decency goes to the leftist cyber rag Politico, which posted a cartoon mocking conservative Texans being rescued from a rooftop by the Coast Guard.

The drawing by Matt Wuerker shows a fat man in a rebel flag shirt being lifted via helicopter, giving praise to God’s “angels” for rescuing him.

The cartoon was meant to insult Texans, Christians, and conservatives as dumb rubes who are anarchists exhibiting their refusal to acknowledge that the government is saving their life.

Wuerker, who along with Ann Telnaes of the Ted Cruz’s “monkey daughters” infamy, is a Pulitzer Prize winning cartoonist.  Noticing a pattern?

Wuerker attempted a weak defense of his “art” saying he was just mocking that specific kind of Texan – those stranded on roofs? – though you can bet Wuerker and his fellow leftist cartoonists likely don’t dehumanize the constituencies of the Democratic Party, let alone during the middle of a humanitarian crisis.

When it comes to practicing ugly politics, the Left isn’t deterred by rainouts.

Interested in more news from Texas? We've got you covered! See More Texas News
Previous Article VIDEO: Does This Look Like An Accident, Or An Assassination Attempt, To You?
Next Article Je Ne Suis Pas Charlie