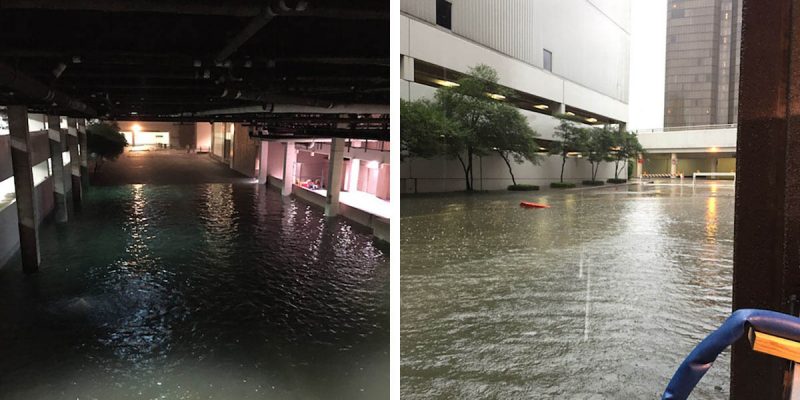 What we’ve seen while Hurricane Harvey has deluged Southeast Texas and Southwest Louisiana over the past several days, turning the Corpus Christi and Houston areas into disaster zones where the human spirit has been locked in a death struggle with Mother Nature, is – among other things – the pettiness and empty soul of the Democrat media. Three examples prove how low the Left has sunk – the Melania shoe controversy, the beard-stroking over the “unrestrained capitalism” that led to the disaster in Houston, and the vitriol aimed at Joel Osteen.

We don’t need to spend too much time on the shoe controversy. It came courtesy of video footage of the President and First Lady getting on Marine One in order to hop an Air Force One flight to Corpus Christi to survey damage there yesterday, and Melania Trump wore a pair of high heel stiletto pumps while walking to the helicopter. That she later appeared in front of the cameras in Texas wearing white sneakers was less widely discussed than the first footwear she had on – as if Melania was going to be walking through hurricane wreckage in a pair of Manolo Blahniks.

It was an absurd contention made by many in the media who attacked the First Lady, emanating from a non-story to begin with. Down here in Louisiana the high heels were notable only as the source for Cajun Reebok shrimp-boot jokes, but the Democrat media attempted to play her choice of footwear as an example of how out-of-touch the rich people in the White House are. This myth was exploded when she changed to sneakers on the ground in Texas, but the pettiness and grasping nature of people looking for something, anything to criticize was unmistakable.

And then there was the critique of Houston, known as possibly the most capitalist city in America, as a preferred victim.

An entire 10-minute segment at the horrendous Democracy Now focuses on a critique from the “father of environmental justice” Robert Bullard, who lives in Houston, trashing the city and its development as the cause of the Harvey devastation. Bullard is a crank, but he’s not alone – now that the city has been pounded by five straight days of tropical storm-scale rain, it’s fashionable to hound Houstonians for the city’s lack of zoning. The Washington Post has a piece trashing the lack of zoning in the city, and so does the New Yorker, and so does Slate, whose headline was Houston Wasn’t Built To Withstand A Storm Like Harvey.

Drop 50 inches of rain in five days over Washington, New York, Baltimore, Philadelphia, Chicago, Los Angeles, San Francisco, Boston or any other blue-state utopia, and you’ll find out that none of them were built to withstand a storm like Harvey, either.

Houston isn’t the kind of place East Coast leftists would like. It’s full of middle-class people who like the fact they can buy a big house cheaper and get a well-paying job more easily and with less credentialism than practically anywhere else in the country, and the local culture embraces football, country music, pro wrestling and all kinds of other things Manhattanites would find gauche and bourgeois. Antifa and Black Lives Matter are despised in Houston perhaps more than anywhere else despite the fact the Houston area is one of the most diverse in America.

Is Houston a “designer” city? Of course not. Houston is what happens when you build a city around an economy. It’s an endless expanse of flat coastal plain which has been developed according to the profit motive and the population seeking the American dream. And yes, it’s in a hurricane zone. And yes, it doesn’t drain well, meaning now it’s probably time to come up with additional solutions to move rainwater out of the city – but 20 trillion gallons of water is going to swamp any city on earth it drops on, no matter how well our socialist masterminds engineer that city.

Finally, there is Joel Osteen.

We don’t have any particular brief for Osteen and his “prosperity gospel” teachings. They don’t look much like Christianity to us – the idea that God is some sort of paymaster who’ll provide earthly rewards to Christian believers is a distinctly heretical one; Jesus said his kingdom is not of this world, and to preach otherwise is a bastardization of the faith. Matt Walsh put this correctly yesterday…

This is the essence of the Prosperity Gospel preached by Osteen and his ilk. It’s insidious and heretical, but crowd pleasing. A Gospel that tells us to embrace suffering and poverty will not pack a 17,000 seat arena. It won’t sell books. It cannot be monetized. It won’t buy you mansions and private planes. It won’t make you famous. People don’t want to hear it. They want to hear something else. They want to hear that fortune and luxury are just around the corner — God wants us to have these things, as Osteen constantly insists — and all we need to do is be a little more positive and probably buy one or two more Joel Osteen books.

This is the Gospel of the World. The Gospel of Osteen. A Gospel specifically tailored to challenge no one, offend no one, and make everyone happy. And it fails miserably on every count.

Consider this: after Osteen has spent his televangelist career tickling ears and professing this watered down, materialist, luxurious faith, still the world hates him. It really hates him. I’m actually struck by the passion and virulence of the hatred, coming as it is from people who don’t accept the Gospel Osteen has bastardized and don’t care about the heresy he professes. Osteen has tried very hard not to be hated by these people, but they end up hating him even more than they hate Christians who actually believe in the Bible. That is the great and tragic irony. Osteen has perverted the Gospel in order to befriend and impress the very people who now slander him. He has given the world what it wants: empty hope, vague optimism, a religion stripped of all that is difficult and painful, yet they still throw their stones.

If you preach the true Gospel, the world will label you a neanderthal and a bigot. But if you come up with a new Gospel in the hopes of avoiding these insults, you will be labeled a fraud and a hypocrite. The only difference is that the insults in your case will be true and well deserved. Out of your fear of false attacks, you have opened yourself up to accurate ones. And even the unfair attacks will still be largely your own fault. They are the fruits of your lies and your heresy. You will be like a wolf in sheep’s clothing who gets devoured by other wolves.

Walsh nailed the Osteen controversy, which is based on a highly dubious proposition – namely, that Osteen refused to make his Lakewood Church in downtown Houston, which is a renovated 17,000-seat basketball arena where the NBA’s Houston Rockets used to play, a hurricane shelter. Church services were canceled over the weekend and by Monday the internet was boiling over with accusations Osteen had taken a powder from helping his fellow man.

Given the corporate nature of his ministry, this kind of damage to the Osteen brand would have to be significant. But was any of it fair? After all, Lakewood Church released photos of flooding in the lower floors of the building and correctly pointed out that it was less-than-easily accessible due to floodwaters surrounding it. Osteen denied there was ever a plan to turn people away from the church and showed pictures of it being made ready, with air mattresses laid out in hallways, as a shelter for refugees after the storm.

Logistically, it may well be that Osteen’s facility has much more utility beginning later this week and next week than it did while the floodwaters were rising.

But here’s what’s important about the trashing of Joel Osteen – he’s not being butchered by late-night comedians, pundits and internet smartasses because of the heretical nature of the prosperity gospel he preaches. None of those people even know that Osteen’s ministry is any different from the standard evangelical Christian fare. They hate all of it, and they think any evangelical Christian minister is just like Osteen, and they’re going to hold him to an impossible standard they’re going to impose on everyone else in his profession. Someone is circulating an accusation that only six of some 1,500 churches in the Houston area were actively serving their communities as relief centers for the storm, which is an abject lie – it’s first of all quite likely that a third to a half of those churches are flooded and therefore out of commission, and many of the rest might for one reason or other not be suitable for storm relief yet. As for the accusation only six are serving in such a capacity, it’s certainly untrue.

It isn’t that Joel Osteen’s brand of Christianity is deserving of criticism. It is. It’s that Osteen is being held up as the examplar of Christianity as a whole, in order to fulfill an anti-Christian narrative. And the entire premise behind it, namely that Osteen is doing nothing to help his fellow Houstonians and neither are any of the other Christians in that city, rests on falsehoods.

Houston is undoubtedly going to prove these people wrong. But it’s very tiresome to see Harvey be politicized by the same ghoulish opportunists who politicize everything else. Shame on them.

Interested in more news from Texas? We've got you covered! See More Texas News
Previous Article Circumstances With Harvey Are Finally About To Change, Per The Latest Forecast
Next Article What Is The FBI Trying to Hide About Hillary Clinton?