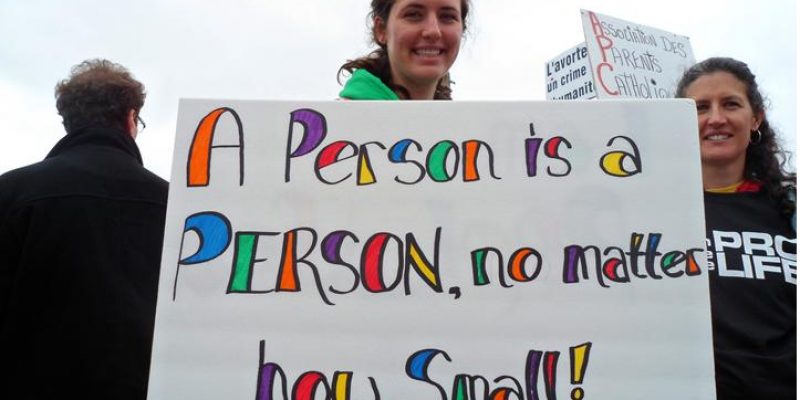 “A person’s a person no matter how small.”

That line comes from the Dr. Seuss is seen at pro-life anti-abortion rallies around the country, but when he wrote it it was about supposedly about the atom bomb, not personhood. Seuss was thinking about the sheer power of something so tiny and the devastation in Hiroshima. After World War II, Dr. Seuss visit Japan and said he very impressed by them and that the tiny Whos in “Horton Hears a Who” were reminiscent of the Japanese people.

Even though Dr. Seuss had no intention of making a pro-life argument he had inadvertently gotten to the core of the debate. “A person’s a person no matter how small.” Personhood, that is really what pro-life and abortion advocates battle over.

The argument that life begins at conception is a simple and basic one. Science is very clear that at the point of conception a new life is formed containing its own unique human DNA. Abortion advocates can claim a human embryo or fetus is just a clump of cells but that weak argument is defeated by their own website.

As one can clearly see the human body is clearly growing.

So if you cannot argue life then what can you argue to defend abortion? Personhood.

So when is an embryo a person?

The truth is that I do not know. I cannot create some arbitrary standard to say at this week of pregnancy a human embryo or fetus is a person. I can say that the more we learn about human embryos in the womb the earlier that line seems to grow.

Throughout our history, humans have tried to say other humans were not real people. They have tried to deny them human rights. From African slavery to the Jews in Germany to the gays in Chechnya lines have been drawn between who is human and who is not.

Just last week the Chechen president said of gay men, “They are devils. They are for sale. They are not people.”

I believe we will never see real change in the world until everyone both born and pre-born are seen as worthy of human rights.

Whether a human fetus or a human adult gay man in Chechnya all should be treated with basic rights. All are deserving of life and liberty. These are the rights found in “nature and nature’s God” as the founders wrote in the Declaration of Independence.

So how can we fight for those rights?

When discussing abortion with someone that supports it the first thing to do is grant them their own humanity and understand that they are not generally attempting to do evil. They likely do not see the human embryo or fetus as being a person worthy of rights. You are not going to convince them by screaming at them and calling them a murderer.

What you can do is find out their views. Ask how they came to believe what they believe. Ask their thoughts on when personhood begins. Do not start by judging or condemning them.

Then begin to ask about rights and personhood. If there is not a certain point that we can determine personhood then perhaps it is best we defend all humans.

In a world of tweets and anonymous internet trolls perhaps granting humanity to the smallest person is truly what we need.